Today Facebook is globally launching Messenger Day to put a utilitarian spin on the slideshow format. While Snapchat Stories is for retelling what you’ve done, Messenger Day’s “Who’s up for?” filters and Active Now indicators help you find friends to chat and meet up with.

Now after gaining millions of users through tests in a dozen countries like Poland and Australia, Messenger Day is rolling out for everyone at the top of Facebook’s chat app with today’s iOS and Android updates, plus in desktop messaging threads. The feature lets you share with the public or a custom friend decorated photos and videos that disappear after 24 hours.

If Messenger Day catches on, it could encourage visual communication through Messenger’s newly enhanced camera, jumpstart chat threads and get friends together offline. And Facebook’s VP of messaging David Marcus tells me Day will “probably” insert advertisements between posts to become one of Messenger’s first revenue streams.

Alongside WhatsApp Status, Instagram Stories and Facebook Stories, Messenger Day could use convenience to compete with Snapchat for user growth, which has become a key weakness for Snap as it goes public. A billion people already use Messenger, after all. Snap’s share price dipped slightly this morning as Messenger Day was announced.

The launch demonstrates Facebook’s philosophy that while Snapchat may have invented Stories, it’s actually a fundamental content medium bigger than any one company. Facebook is not afraid to copy, no matter what critics say. All that matters is whether it’s valuable to users.

People will naturally ask why they need another place to share, and maybe they don’t. But if Messenger can reimagine the Stories format around usefulness instead of just fun, without inconveniencing the rest of the chat app, it could spur us to make more memories instead of just consuming old ones.

“This is about today. It’s not about yesterday. It’s not about tomorrow,” Marcus tells me. “The two key functionalities are 1) I’m going to set context because it’s going to make for better conversations if people know where I am and what I’m doing. And 2) It’s about where I want to take my day, like ‘I’m bored and I want to go out for coffee’ or ‘I want to go see a movie’ so I’m going to use a frame, take a photo, and see which of my friends are going to engage with me to actually make that plan, because planning is one of the core capabilities of a messaging app.” 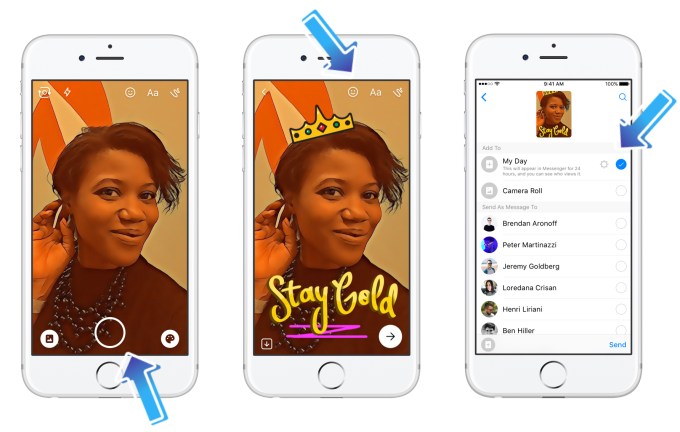 I got to spend yesterday trying Messenger Day on my own, and was impressed by how it accomplished both those objectives without adding friction to the app.

Messenger Day appears above your chat threads on Messenger’s home screen, employing the same bold design that helped Instagram Stories rocket to 150 million daily users in 5 months. There you’ll see thumbnail tiles previewing the Days of friends, instead of just a name and profile pic. They’re reverse chronologically ordered to help you make plans with people sharing now. You can tap to fast-forward or rewind, and hold to pause, with your next friend’s Day appearing right after the last. That auto-advance style will make it easy to insert ads between Days. 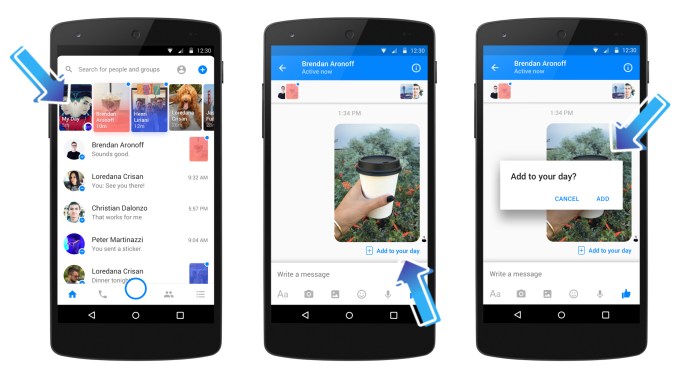 While there’s no Like counter, Messenger lets you instantly reply privately to a Day with custom or pre-filled messages like “haha”, “Wow”, a heart, or a “100” emoji that show in your chat thread with that person. This drops the barrier for turning a broadcast into a conversation that can feel a bit daunting in Snapchat. And if you’re already chatting with someone who’s posted, you’ll see a call out on mobile and Facebook’s desktop site to watch their Day.

One special feature that Snapchat doesn’t have: Active Now. You’ll see a green dot on the Messenger Days of friends who are currently available to chat with on the app. That breaks the ice to push users from seeing a friend doing something fun to asking if they can come join. In this way, Messenger might be a way to cure the loneliness that could succeed where Down To Lunch, Free and Foursquare failed. 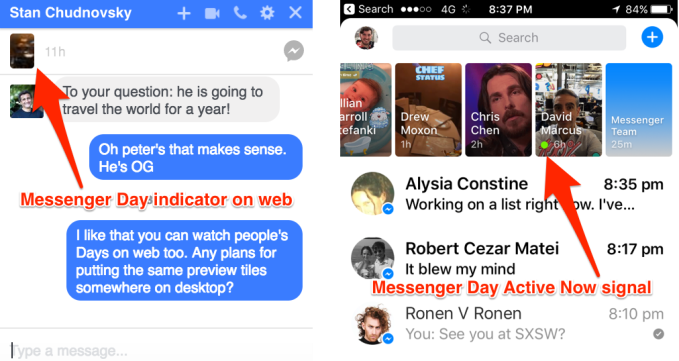 Messenger’s big camera redesign from December seems tailor-made to boost Day usage. You can post by tapping the big shutter button at the bottom, the “Add To Your Day” spot at the top or from a prompt when you share imagery in a thread. Sharing options include natively shot photos and 15-second videos, as well as uploaded media, including GIFs that are shown inset with a black border to denote they’re old. You manually can save what you share frame by frame.

By default, posts are visible to “Everyone except” specific people you block. However, Facebook says that only people who have permission to message you like Facebook friends will see your Days at the top of their app. You also can choose a specific list of people who can watch your Days, and this applies to everything you post, rather than having to be set each time. You’ll also have the option to send posts to friends directly as well as sharing to your Day. You’ll see the faces of people who’ve seen your Day at the bottom of the posts.

Before or after you share, you can embellish your content with drawing, text captions, animated selfie lenses, environmental effects like overlaid bubbles or lava lamp colors, style-transfers that make your image look like a painting or sketch, virtual “Dress Up” props, speech bubbles, stickers and more than 5,000 illustrated filters.

This is where Messenger Day’s unique slant on Stories for messaging comes in. The searchable, categorized filters include calls to action like “Who’s up for grabbing coffee?”, “Road trip”, “Movie night?”, “Let’s grab drinks”, “Let’s go for a run” and tons more. These make it easy and fun to invite friends to hang out with you offline. And unlike posting “who wants to grab dinner?” on Facebook, where a lack of responses could make you look unpopular, the posts disappear and all replies in Messenger Day are private so you don’t have to worry about seeming lonely.

And in case there’s not the right filter for you, Messenger Day can take any text you write and turn it into a filter, like with your friend’s name or the place you’re located. These computer-generated filters make the creative options in Messenger Day ostensibly infinite.

Overall, Messenger Day felt less interruptive and more seamless than I expected. Like Instagram Stories, it’s easy to ignore if you don’t care about it. And Messenger works fine even if friends only post to Day rarely, as that could reduce the noise and keep it focused on planning hangouts.

Still, there’s plenty of missing features I immediately wish it had, including:

The biggest priorities should be some basic color and light adjustment filters, and caption background colors because Messenger’s font is already a bit hard to read and can blend into the imagery to become unreadable.

Surely with time, Messenger will adopt some of these and build more features that make it stand out. But for v1 of a global rollout, it does a remarkable job of hitting most of the key features so it immediately feels usable.

For now businesses aren’t allowed on Day. There also are no ads, but when asked if he saw an opportunity for them, Marcus told me “Probably . . . we want to experiment with more ways to open threads with businesses . . . You never want us to get in the way of someone sending a message really quickly . . . as long as we keep that alive, we have license to experiment and see whether really good advertising that opens threads people want to have . . . is actually valuable.”

Attacking Snapchat from all angles 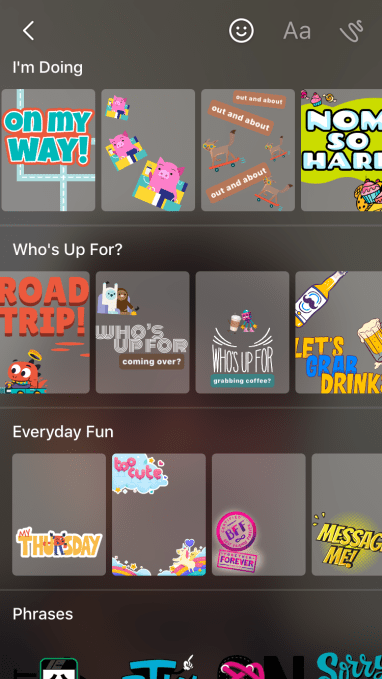 Messenger Day’s “Who’s Up For?” filters help you plan to meet up with friends

Visual communication is the future, and as I wrote yesterday in my deep dive about Messenger’s evolution, any chat app that doesn’t get on board is doomed. Still, Messenger is taking a risk here by putting Day above your threads, reducing the number you see on your screen at first. Branching out so aggressively into social media isn’t worth hampering Messenger’s growth in traditional chat, so Facebook will have to watch carefully to make sure different demographics around the world don’t message less after the rollout.

Facebook was late to the Stories format, but now it’s approaching it and competing with Snapchat through every one of its core apps. If it succeeds, it could further curtail Snapchat’s growth, especially abroad in some markets where teens haven’t even tried it but have been on Messenger, WhatsApp or Instagram for years. Facebook’s versions likely won’t eradicate Snapchatting by existing loyal users, but could chip away at its use cases while being good enough to convince some people they don’t need to sign up for another social network.

There are no punches pulled here. Facebook is unabashedly stealing the best parts of Snapchat and putting them front and center. That might seem like the opposite of innovation, or at least bad sportsmanship. But Facebook’s ideology has always centered around scale, not originality. It wasn’t the first social network, but it’s the one that got everyone. It didn’t invent Stories, but time won’t necessarily reward the one that did. Just those that put them in everyone’s pockets.