Nimble CEO Jon Ferrara has been around the contacts block a few times. He was the guy who founded Goldmine, the grandaddy of contact databases. For the last several years he has been working at Nimble, a startup with the goal of managing contacts info inside Office 365 and G Suite. Today, his company announced a $9 million Series A round.

The round was led by Imagen Capital Partners with participation from Mark Cuban’s Radical Investments and  Indicator Ventures along with individual angel investors including Jason Calacanis, Howard Lindzon and Don Dodge. Today’s investment brings the total raised to $12.5 million.

Nimble is attempting to automate what has essentially been a manual task of collecting contact information, whether that’s putting it in a Rolodex back in the day or typing it into your CRM like Salesforce. Ferrara says the issue has always been the manual nature of the activity, and his company wants to make that a simple process. By storing the contacts in the cloud, you can retrieve them any place, any time, on any device (assuming you have internet access).

It began by working with Google and Microsoft and their cloud app suites because he sees that as an easy way to find information where people are working, whether that’s an email or other document. The company plans to offer a generic browser plug-in soon that will allow users to capture this information wherever they happen to be in the work process. 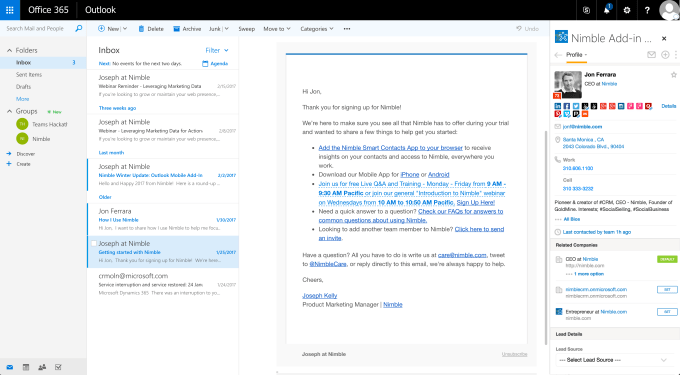 Last month, Nimble released a version that works inside of Outlook for iOS. While you could argue that Outlook already has a contact database of sorts, Nimble gives you much richer and more detailed information than most people could compile on their own without a lot of effort.

The product begins by extracting any information it can find about the person. It may pull the name and email address, it then checks for online social media activity and checks the name and email against a number of private databases (which Ferrara didn’t name). Using all of this information, the company builds a profile with a bunch of data about the individual — and it does this all automatically. Users can augment this information by adding tasks, notes, deals, events and so forth. What’s more it can track all of the interactions you make inside of Nimble with a contact, so you have a history all in one place.

While none of this is revolutionary, the fact it tracks a range of information in an automated fashion could prove very useful for salespeople (or any knowledge worker who needs to keep track of a large list of individuals in a database in this fashion.)

The company launched in 2009 with the pay version of the current tool launching in 2013. Nimble has 25 employees, but it’s a good bet it will be adding to that number with the new investment in pocket.