Entrepreneurs who pitch on ABC’s Shark Tank typically make packaged goods and apparel. Occasionally, the high tech breaks through. XCraft, the company behind the PhoneDrone Ethos, scored a rare investment from all of the judges on the ABC show last spring, for example. And tonight, drones are once again flying “in the Tank” as DARTdrones seeks funding to build its national flight school for drone pilots.

DARTdrones CEO, Abby Speicher, started the company while she was getting her MBA at Babson College. She was already thinking about forming a startup, she recalls, when she saw Jeff Bezos talking up the aerial future of package delivery on CBS’ 60 Minutes. “I immediately wanted to go out and learn how to fly these things. But after weeks and months of calling around, I realized there wasn’t anywhere to go to learn,” the CEO said.

Based in Scranton, Penn., DARTdrones now employs 11 full-time and has more than 40 professional aviators and drone operators working as instructors on-contract around the country. Seasoned pilots, they train everyone from hobbyists, to professional photographers, fire fighters and police officers, in how to safely use drones for fun and work.

While DARTdrones started out targeting consumers, including lots of kids and parents wanting to learn to fly drones for fun, it has shifted to focus on training and consulting for government offices and medium to large employers. Businesses are increasingly incorporating drones into their work, for example to conduct inspections of energy infrastructure or real estate, to gather video for media use, or to do environmental research. 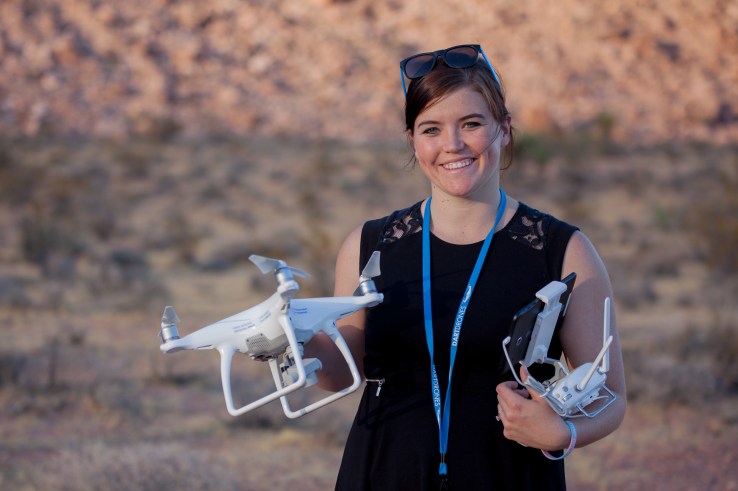 Speicher said the shift was planned, not a “pivot.” Her company was waiting to do more commercial and industrial training, but had to wait for the FAA to establish its Part 107 regulations, which it did last year. These allow and govern how people are able to fly drones legally for business purposes in the US.

DARTdrones’ Director of Training, Amelia Owre, is a U.S. Navy aviator who previously created the training programs for the FireScout, one of their unmanned aerial systems. She said DARTdrones’ course offering now includes 5 open enrollment courses, and dozens of others for commercial and industrial drone use that are industry-specific and conducted in the field. She is particularly proud of the work that DARTdrones is doing with law enforcement and firefighters, she said.

Will DARTdrones still be in business if drones become fully autonomous? Yes, Owre said: “If you are going to use a drone as a firefighter, you need to know exactly when it will be useful, and how to gather and use data pulled from the drones. It’s imperative you have the training to know when and how to fly. Flying over a fire at certain times could just introduce chaos,” she said, “or you may end up with no good data from your mission.”

DARTdrones courses open to the public include in-person trainings to learn to fly the popular DJI Phantom and Inspire drones; a Part 107 test prep course, which is offered either online only or in-person for a full day; and an online aerial photography course. The company also sells a “bundle” of all these courses for a discounted rate.

And it created an introductory online course, “Drones for Beginners,” just for their pitch at Shark Tank. It becomes available to the public tonight concurrent with the episode airing on ABC at 9:00 p.m. eastern tonight. The introductory course costs about $20.

So far, the company’s customers have included employees of the FBI, CNN, the NFL’s Chicago Bears and the New York Times, Speicher said. The company has an early lead in the market, but to be sure, more online and offline flight schools and consultancies have opened up since the Federal Aviation Administration put the Part 107 rules in place last August. One big competitor for general drone knowledge and Part 107 test prep is Fly-Robotics, whose courses are promoted by the Academy of Model Aeronautics (AMA). But for now, DARTdrones offline courses are available in more markets than any other US flight school, Speicher said.

Speicher and Owre were not permitted to discuss the results of their pitch with TechCrunch during this interview which took place before their Shark Tank episode aired. However, the startup closed a $300,000 investment from Dallas Mavericks owner and Shark Tank judge Mark Cuban in exchange for a 10% stake in their business.