Today Politwoops, the service that tracks politicians’ deleted tweets in an effort to hold elected officials accountable for the statements they’ve made on social media, announced it’s now up-and-running in 54 countries worldwide and has added the ability to show realtime statistics. That is, you’re able to see how fast a tweet has been deleted by a politician or candidate, as well as track other metrics, like what and when politicians delete the most tweets or even which party is responsible for more deletions.

The transparency service, as you may recall, came back online in the U.S. last year after having earlier been denied access to Twitter’s API. Twitter had mistakenly argued that its users had the right to express themselves on its platform without their tweets becoming permanent record. Of course, this position ignored the fact that politicians and other elected officials are considered public figures, and their statements are held up to increased scrutiny by the media, their constituents, and their fellow politicians. 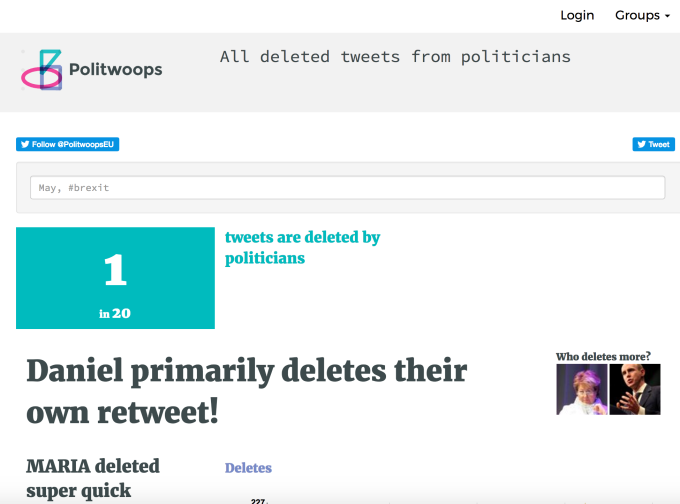 Twitter later reversed its decision, and Politwoops returned to serve the U.S. market around a year ago.

In the U.S., the version of Politwoops is run by ProPublica. Unfortunately, that means it does not have the same features as the other countries following this update, as its site is managed separately.

Along with the news that the service is now capable of tracking politicians’ statements in 54 countries and the European parliament with added realtime statistics, the organization behind the service, Open State Foundation, also said that the new version of Politwoops has added several features. This includes an improved search engine, which includes more filtering options and information specific to the individual country’s politicians and their use of Twitter.

When you venture into one of the countries’ feed of deleted tweets, Politwoops will display that country’s metrics, like how many tweets, on average, are deleted by politicians in that region, what kind of tweets are more often deleted, and who is quickest to delete their tweets, among other things.

Politwoops is a useful tool for journalists and citizens alike as it holds the politicians accountable for what they say, and highlights the times when they’re trying to walk back from earlier positions – whether because they’ve changed their mind or don’t want to be shown to have once supported an unpopular position.

The new version of Politwoops, run by the Open State Foundation, is available here.