The new HP Spectre 15 is a rare marriage between an ultra high definition screen and a thin frame. What makes it better than other 4K laptops is its decent battery life and healthy selection of ports. If Windows is your jam and you need full-size screen, this is the notebook to get.

The latest edition of the 15-inch Spectre x360 is only offered with a 4k (3,840 x 2,160 pixels) screen. HP is that committed to providing an ultra-high res experience. But having a 4K display on a 15-inch laptop often comes at the sacrifice of battery life and processing power, making thinness and battery life tricky. But not with this kit from HP. The Spectre x360 is thin, powerful, loaded with ports, all while sporting a gorgeous 4k touchscreen.

Living with the Spectre X360 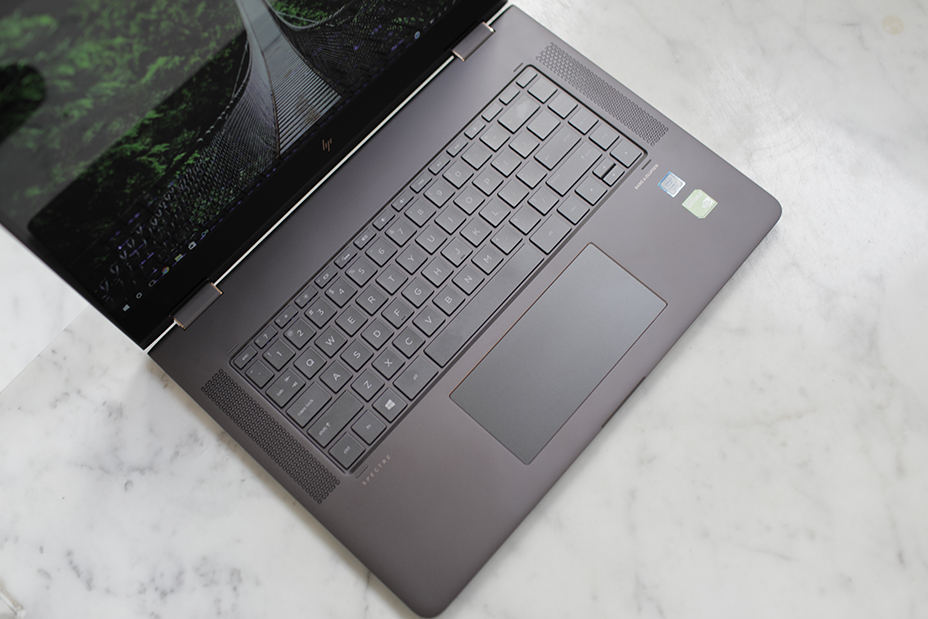 The Spectre 15 is my favorite 15-inch touchscreen Windows machine out today. This notebook follows the proven formula. Though it’s not without some explanation: inspirations for the updated 15-inch model can easily be traced back to 13-inch version that was released and reviewed last year, to positive marks. It’s a good blueprint: a machined aluminum body that weighs 4.4 pounds and measures 14 x 8.9 x 0.7 inches.

In other words, performance is buttery smooth (especially if you remove bundled apps) with decent data transfer speeds and enough graphics power to get you through 4K video or a game of League of Legends.

Despite being a larger system, keyboard layout remains nearly the same as the 13-inch model’s, but thankfully it doesn’t feel terribly cramped. It’s mechanical and includes enough travel for new users to become accustomed to it easily. This is a departure from Island-style keys and while it’s not my favorite, I could learn to live with it.

he touchpad is wide (which is great), but is much shorter from top to bottom than I’d want it to be. If I had to single out what I liked least about the Spectre 15, it would be the keyboard/touchpad combo.

The slight oddities with the touchpad and keyboard are minor: there still is excellent travel on the illuminated keyboard, along with plenty of sensitivity and cursor speed options for the touchpad that make it much more enjoyable and fluid to use. Otherwise, everything else has been great.

The main highlight of this laptop will be its screen. The 15.6″ 4K WLED panel is equipped with a 360-degree hinge, so it is useful knowing even if you don’t ever lay your screen out at a 180 degree angle (or use it in “tent mode”), you still have a 4K panel to look at.

The main question — dependent your needs and personal preferences — is whether or not the extra pixels are worth it?

Next to a Macbook Pro 15″ with Touchbar, the difference in resolution is obvious on paper — 2880 x 1800 on the Retina versus the Spectre’s 3,840 x 2,160 — but in everyday web usage, document creation, consuming multimedia, projecting and the like, I found little difference. There’s also the discussion of user interface scaling with high resolutions, which Macs have done better than most Windows machines; that’s for another post.

But in reality, this 4K screen isn’t color-corrected or up to Adobe color gamut standards, so it’s no editor’s display.

Like myself, you might be pleased to find extra pixels to work with in Photoshop or Lightroom, and even further pleased to find that your system won’t hang rendering it. But in reality, this 4K screen isn’t color-corrected or up to Adobe color gamut standards, so it’s no editor’s display.

Of course, with specs like this, the main concern is battery life. A 6 cell 79.2 Whr battery provides enough juice to easily get past the 6 hour mark for tasks on the web, even touching eight hours if used conservatively. It won’t break battery life records in the 15-inch category, but it gets away with it, despite pushing a 4K screen at all times. That’s impressive.

Audio is tuned to be flat. The quad Bang & Olufsen speakers can be tweaked via a provided app, and at higher levels is more than enough to fill a small room or be the source of entertainment for a small gathering of two to four friends. Overall it produces loud sounds which can have depth, with a touch of bass.

Don’t call it a stylus 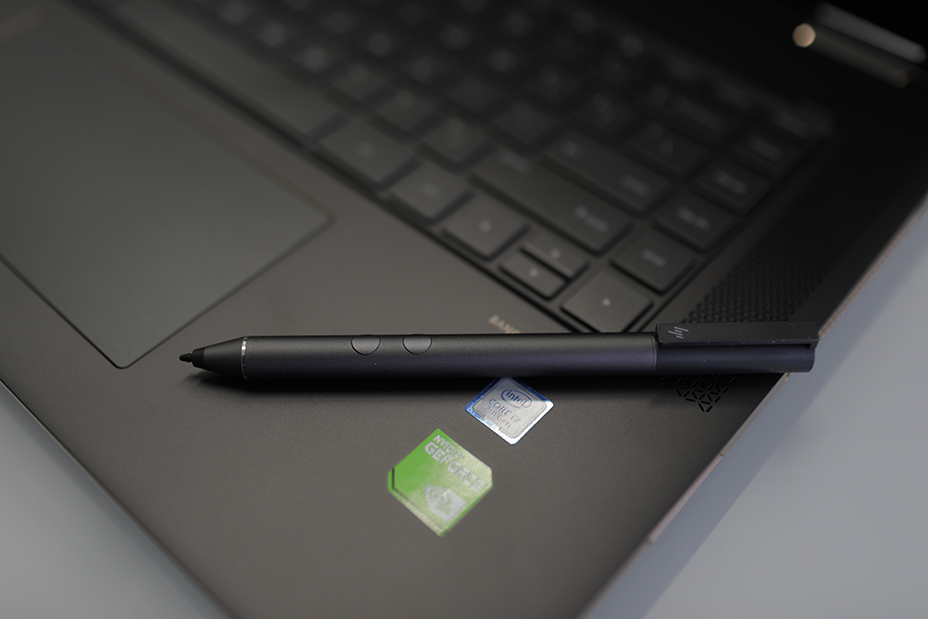 This isn’t a first by any means, but HP is providing an active stylus with every new 15-inch Spectre. It’s not your average display stylus either; it’s made of metal, connect via Bluetooth, includes two function buttons and <em>almost</em> matches the chassis finish. In other words, it’s actually worth something.

If you venture outside of the traditional clamshell form, into tablet or tent mode and/or want to try some drawing or precision input, then it’s a welcome freebie.

Out of the box, its current capacity isn’t <em>that</em> useful, so I’d wait for the upcoming Windows Creator’s update, which will be adding creative apps and even better active stylus integration. It will mean your freebie active stylus will have a higher calling once Microsoft releases the update. 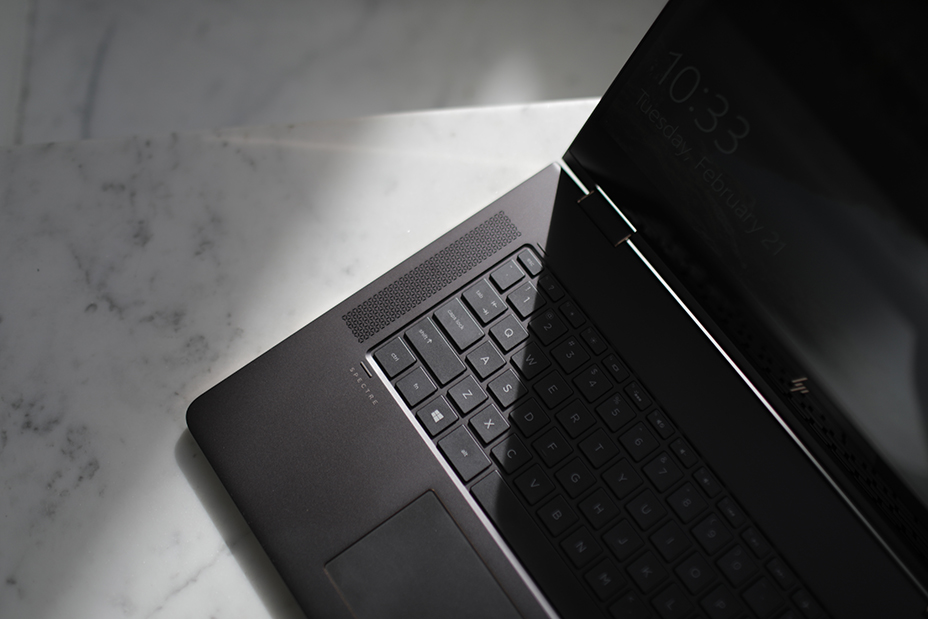 If you have a catalog of things in 4K you’d like to watch, but also are in the market for a new Windows laptop, then the Spectre 15 x360 is what you’d want.

If you don’t need the bigger screen and the worse battery life but still want the design HP has engineered, go for the smaller Spectre 13.

The everyday consumer doesn’t truly need 4K in their daily lives, while others might clamor for its aggressive sharpness and clarity. If you don’t want the bigger, 4K screen and worse battery life, go for the smaller Spectre 13.