New York-based Scout wants to take the pain out of hiring, by automating search and outreach for companies. The company is able to reduce friction associated with recruiting by presenting hiring managers with qualified candidates and making it easier to reach them.

The company was founded to help simplify the process of finding and recruiting top talent. That’s something founder and CEO Andres Blank struggled with at his last startup, a photo-sharing app called Pixable where he hired 30 people before eventually selling the business to SingTel.

“We relied a lot on recruiters and spent a lot of time trying to bring in the best people,” Blank told me. “It was super tedious.” With that in mind, he created Scout to cut through a lot of the noise in finding candidates, and automate outreach to them.

Rather than hiring a recruiting agency or searching LinkedIn for qualified candidates, Scout customers simply submit a job description of who they’re looking for, and the company follows up with a list of 10 potential hires that it believes will fit the criteria. 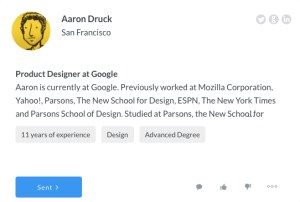 All the candidates Scout finds are displayed on its platform with a detailed profile of their skills and experience. On the backend, Scout has also already done the work of finding the best email address to reach them on.

That allows recruiters to choose which candidates they’d like to approach, and Scout sends personalized emails directly to them. The system tracks all responses and sends automated followup emails to candidates, but replies go directly to a hiring manager’s inbox when candidates respond.

The system vastly reduces the time spent by recruiters and HR managers in finding candidates. According to Blank, Scout customers reach out to about 70 percent of candidates sent to them. On the recruit side, he says the company also has a vastly higher open rate for its emails compared to LinkedIn’s InMail.

Rather than operating on a per-hire basis, Scout customers pay on a monthly subscription basis, starting at $600 a month for up to 100 leads. So far Scout has attracted business from companies like Lyft, Reddit, Sony Music, and DigitalOcean.