DatePlay, a new dating app co-founded by The Apprentice finalist Vana Koutsomitis, is gearing up for a public Beta launch, which TechCrunch understands could be as soon as tomorrow.

The concept, which Koutsomitis first pitched on the U.K. television show back in 2015, promises to ‘gamify’ the online dating experience by having users work through a series of mini-games or quizzes. 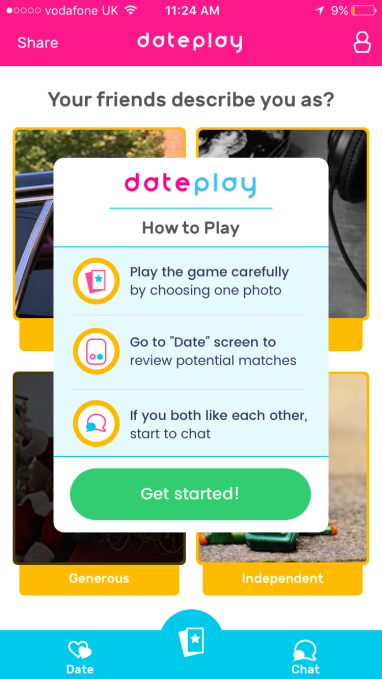 It will then use the personality data the quizzes collect, coupled with the app’s own matching algorithm, to help find you a potential date.

Although DatePlay is yet to hit the App Store, I managed to get my hands on an early build of the app, which, I’d caution, could still change prior to launch.

I also understand that the strategy being employed by Koutsomitis and DatePlay’s other co-founder Joris Magenti has been to keep the Beta version as simple as possible while the startup seeks feedback. The thinking is that it is always better to add features later rather than have to remove them.

After signing in via Facebook, DatePlay explains ‘How to Play’.

The middle screen is where the gaming action takes place and consists of a series of BuzzFeed-style multiple choice quizzes.

Some of the questions seem very random and just for fun, while others, such as asking you to choose your favourite place to go on a first date, are more specific. 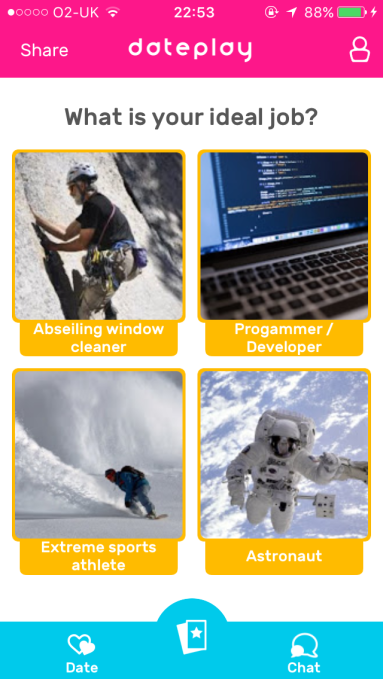 There also seems to be a fair amount of overlap to the questions and themes in general, presumably to help deter you from trying to game the system.

In fact, Koutsomitis told me last year that the whole idea behind DatePlay is to eliminate ‘self reporting’: the tendency to create an online profile as you’d want to be seen rather than how you actually are, typically encouraged by form-filling styled dating sites, such as eHarmony or Match.

At the same time, by making an attempt to match people based on how compatible their personality types are —  I’m told that there is a lot more going on under the hood than is being surfaced  — DatePlay wants to avoid the superficiality of apps like Tinder.

The left screen labeled ‘Date’ is where you’ll find prospective matches, including a compatibility score based on personality data garnered from the quizzes you’ve taken. Similar to Tinder, you swipe in opposite directions to like or reject a match.

The right screen labeled ‘Chat’ is where you can message any mutual matches. At the top of the screen it shows you attributes you have in common with your match, based on the answers you both gave.

How well does it pan out in practice? The short answer is, only time will tell. Like any new dating app, once it launches, DatePlay will be heavily reliant on network effects to ensure there are enough users to put its matching algorithm through its paces.

I gather the plan is to roll out in a few key cities in the U.K. first. I also spotted a share button in the top left-hand corner of the main screen, encouraging you to post DatePlay questions on Facebook.

In my short time with the closed Beta, I only got two potential matches. One was Koutsomitis herself, and knowing she’d probably kill me if she knew I was writing this post, I swiped left and promptly closed the app.

A few minutes later, however, I felt compelled to open DatePlay once again, where I was asked to answer this very important question on Family Guy: 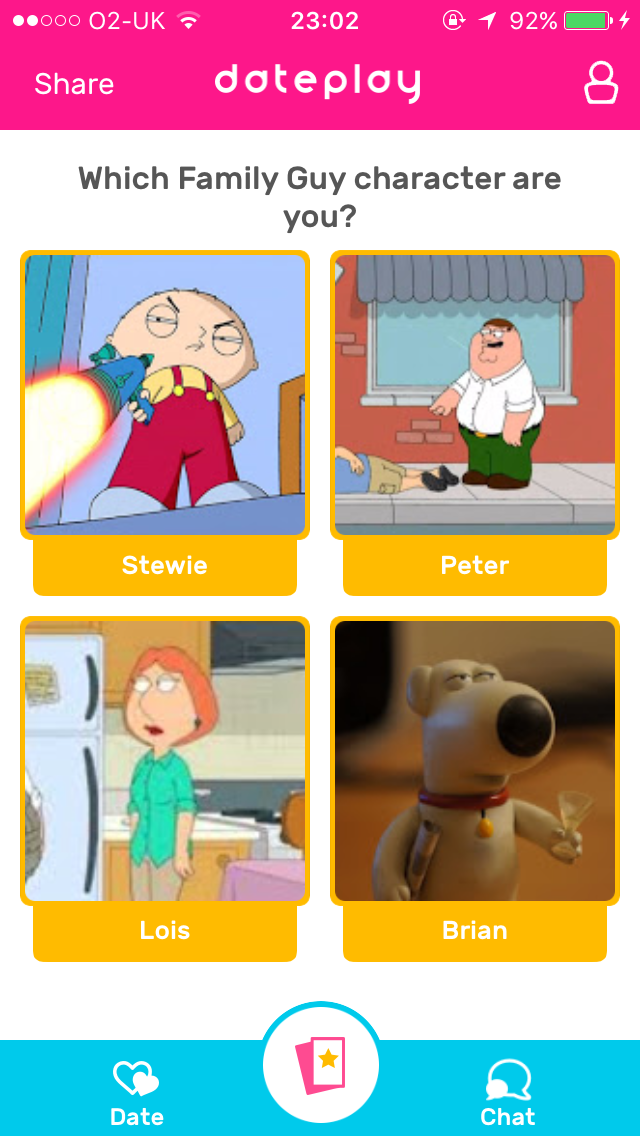 I’ll let you guess the answer.