Hair color startup Madison Reed is on a tear. Over the past year, the San Francisco-based company quietly raised $13 million in new venture funding, landed its products on the television shopping network QVC, launched a chatbot, and opened a New York City storefront called the Madison Reed Color Bar. Such efforts helped it double revenue in 2016, says CEO and founder Amy Errett, though she declined to disclose specific dollar amounts.

To sustain its growth this year, Madison Reed has hired Heidi Dorosin as its first Chief Marketing Officer. Previously, Dorosin was a General Manager for the Clorox laundry division, which includes some of the company’s best-known brands and flagship product Clorox bleach. On her watch, profits for the division grew 30%, and Dorosin kept its products relevant with a new generation, up against competitors including OxiClean and Seventh Generation.

Making and selling hair color may sound like anything but a high-tech affair. But Madison Reed has been equal parts tech startup and consumer packaged goods brand since it launched. For one, Madison Reed started as an e-commerce player garnering attention for its simple to use, hair color quiz and mobile app. The standalone app gives users hands free help coloring their hair at home.

The company’s signature quiz walks users through 12 questions about their hair and how they want it to look. Since it launched in 2014, almost 2 million people have taken this quiz, giving Madison Reed a huge payload of data about what the market needs and wants when it comes to hair products. Users can also upload images of their hair to Madison Reed online. The company’s photo recognition technology sends them a quick reply about what products may work best to cover their grays, or add shine to their ebony locks, in response. 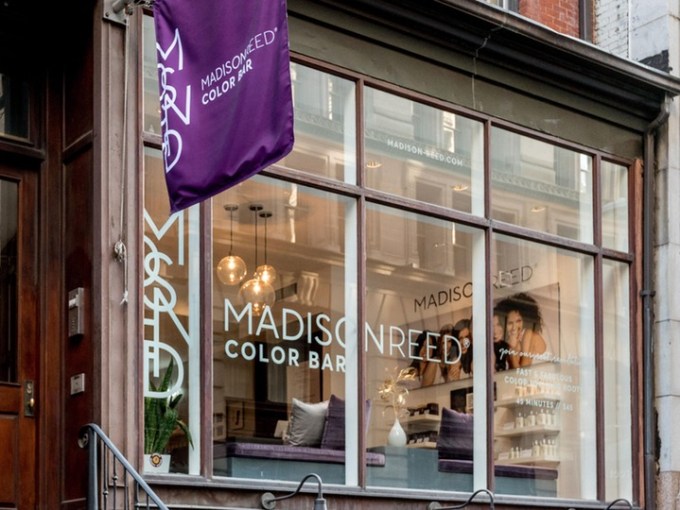 The data and photos the company has amassed serve to guide Madison Reed in tweaking their formulas, or figuring out what new products they should develop next. The company currently sells permanent hair color, glosses, root touch up powders, shampoo and conditioner, and a range of tools and accessories to help people color their hair.

Today, Madison Reed products are sold by Sephora, and on television. But 90% of the company’s sales are still direct-to-consumer, Errett says, and the company expects to keep it that way. The CEO said she believes a direct connection with customers allows the company to deliver the highest possible level of customer service, whether that’s through a 24-hour call center, or Facebook Messenger chatbot.

Newly appointed CMO Heidi Dorosin said she left Clorox to join Madison Reed after having a positive gut reaction to the brand and to CEO Amy Errett. But it wasn’t all inspiration. She said, “I’m a marketer, so of course I ran the numbers! There’s a $15 billion market that hasn’t seen much in the way of innovation in decades. Practically every woman over 40 colors her hair, but all they had to choose from before was a crappy box dye or a very expensive salon experience. I think of Madison Reed as the ultimate hair color hack.”

The company has a new line launching this spring, the executives said, but they weren’t ready to spill the details. Madison Reed may also add storefronts following the success of its New York City-based Madison Reed Color Bar. Unlike a full-fledged salon, the Color Bar accepts walk-in customers only who can get a root touch up, but nothing more complicated like highlights or ombre, for $45 in 45 minutes. The idea is to show customers how to use Madison Reed products to maintain a look they love at home and leave the rest to salon pros elsewhere.