The smartwatch landscape is dramatically different from the one that greeted the first batch of Android Wear devices in the summer of 2014. It’s a lot harder to be bullish about the whole thing these days. Shipments are down, declining 51.6 percent in Q3 of last year, by IDC’s count, while some big names have seemingly abandoned the space altogether, including, notably, Pebble, which recently gave up the ghost altogether.

Perhaps predictably, the space has made room for a couple of dominant players, including Apple and Samsung (along with Garmin, a bit of a wild card), the same pair of names that have asserted similar dominance over the smartphone sector. Samsung, a one-time Wear supporter, has since abandoned Google’s wearable OS in favor of its strain of Tizen, while Motorola recently announced that it would be dropping out of the smartwatch game altogether for the foreseeable future.

Of the first few manufacturers to jump on-board, only LG remains — so it stands to reason that the South Korean manufacturer would be the first hardware partner for the long-awaited and much-delayed 2.0 version of the OS. Announced in May, Wear’s delay is considered a key factor in the recent decline, with many manufacturers choosing to hold out until the next big update before taking another swing at the space.

Officially unveiled today, LG’s two new smartwatches have a pretty big weight on their shoulders, as the official ambassadors of Wear 2.0, as the Nexus line has been to Android before it, only with the decidedly more Herculean task of serving as the product ambassador for a wearable operating space that hasn’t left much of an impact on market share.

LG has smartly offered two distinct specs to usher Android 2.0 into the world — the manageable Watch Style and the everything-plus-the-kitchen-sink Sport, which takes up a heck of a lot more arm real estate as it crams in everything from LTE connectivity to additional battery life. 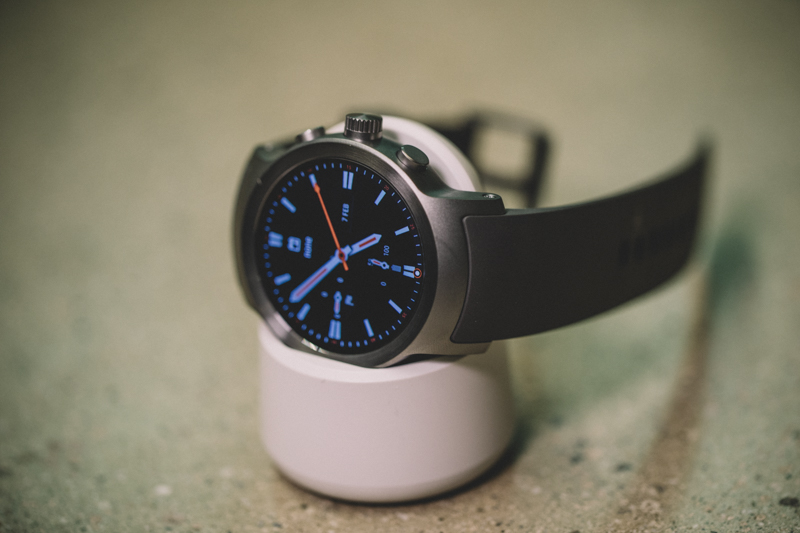 I’ve been wearing the LG Watch Sport around town for the last several days, at the expense of my long-sleeve shirts, which are all a bit more stretched than they were when I started.

The Style is significantly smaller than its sibling and $100 cheaper. Naturally, that comes with some key feature sacrifices, chief among them, LTE, making the Sport the second Android Wear device (after last year’s LG Watch Urbane 2nd Edition) to offer up that manner of wireless connectivity. The Style also sacrifices wireless payment via NFC, another key feature new for Wear.

Heart-rate monitoring and GPS are also only available in the higher-end watch — which really feel like a misstep for LG, as both features have quickly become standardized across wearables in recent years. If neither of those features are deal breakers, the Style is a no-brainer choice between the two, at $100 less and a heck of a lot more wearable than the Sport. 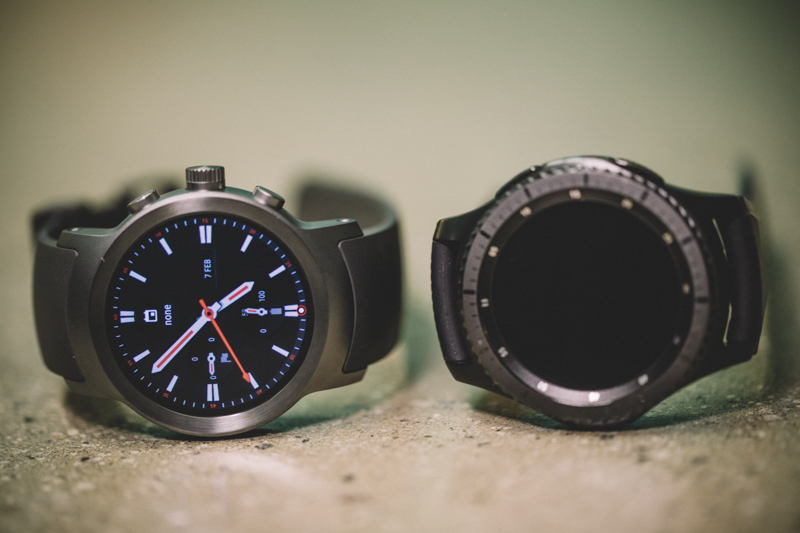 I spent much of my Gear S3 review discussing the gadget’s massive size, so it’s only fair to do so once again. Like Samsung’s latest, the Watch Sport is downright unwieldy. The dimensions are fairly similar to the S3, but the Sport manages to come in even thicker, at 14.2 mm to Samsung’s already extremely beefy 12.9 mm.

I realize that, as Samsung stated before it, big watches are all the rage these days, but the large face coupled with the sort of internals required to run a smartwatch make for a downright gigantic device. I’m 5’11” and have what I assume are fairly average-sized wrists, and the watch simply feels way too big — I can only imagine how large the watch would appear on someone smaller.

It’s a fairly common issue with smartwatches, dating back to early Samsung devices like the original Gear, which seemed to crossover into the territory of Futurama-style wrist communicators. As with those devices, it’s easy imagine how silly such devices will look in a couple of years when the size has come down considerably. In the meantime, good on LG for (unlike Samsung) offering up a smaller version of the watch, even if it did drop some key features in the process.

The style of Sport 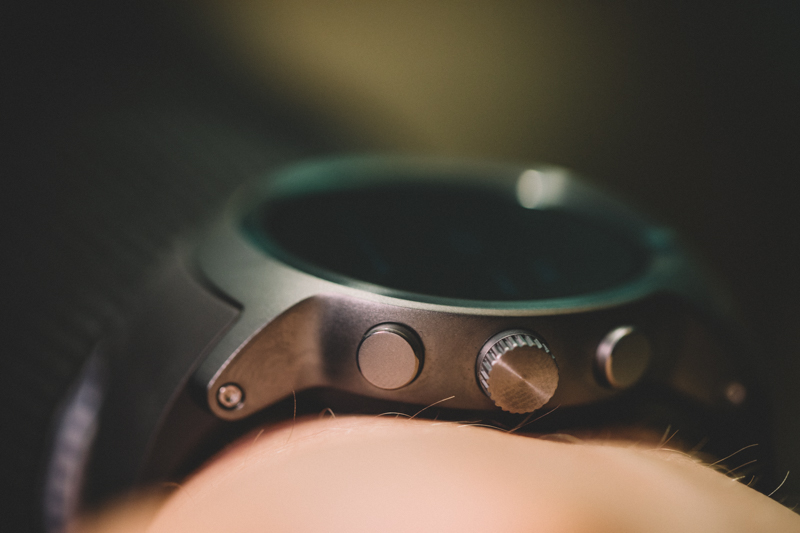 Size issues aside, LG’s actually designed a pretty nice, understated watch, with smooth lines more reminiscent of the Gear S2 than the S3’s many ribbed and numbered edges. It’s a clean bit of industrial design which, in spite of the “Sport” in its name, doesn’t go too far in the direction of many other outdoor watches.

On the left side is a small speaker port and on the right, a trio of navigation buttons — or, rather, two navigation buttons and a big dial in the center, which takes advantage of an Android Wear improvement, serving to navigate around the UI in a manner similar to what you’ll find on the Apple Watch.

It’s much faster than swiping or tapping buttons, though given the watch’s circular design, I did find myself missing Samsung’s rotating bezel feature, which is currently the quickest and best way to navigate around a smartwatch interface.

Unlike the Style’s snap-and-swap straps, the Sport’s bands are rigidly screwed onto the watch case, meaning they’ve got no give and aren’t easily changed with standard straps, so pick a color you like, because you’re going to be stuck with it for a while. It also means that you don’t have the same sort of freedom you’ll find on plenty of other smartwatches, which give users the ability to change things up between, say, the gym and the office. 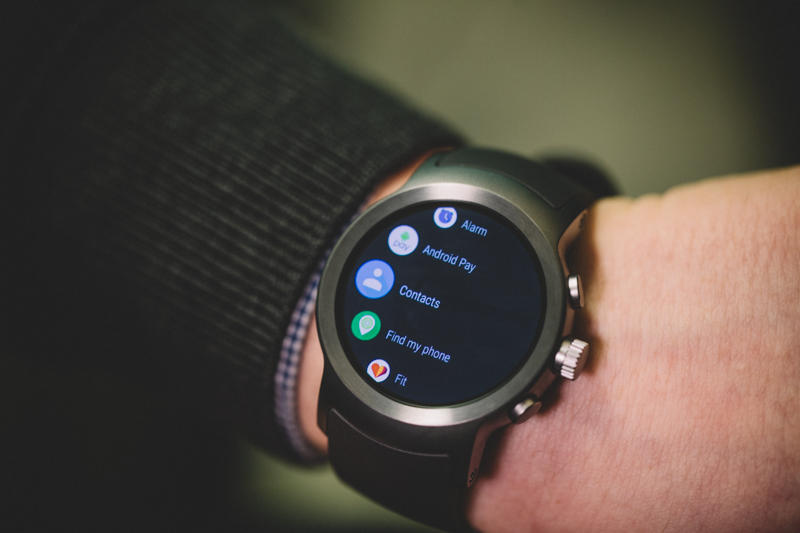 At 1.38 inches, the display is actually notably larger than the Gear S3 (1.3), which, at least in part, is responsible for adding to the watch’s footprint. It’s also considerably more pixel dense, at 430 x 480, which works out to 348ppi (to the S3’s 278). The result is a lovely little display that makes the most out of relatively limited real estate.

As for the side speaker, it’s small, but powerful. I have to admit, it was pretty freeing carrying on a conversation on the watch, utilizing the on-board LTE. It’s about as close as you’re going to get to all of those decade’s worth of Dick Tracy wish-fulfillment. And while the speaker wasn’t great, it did the job. 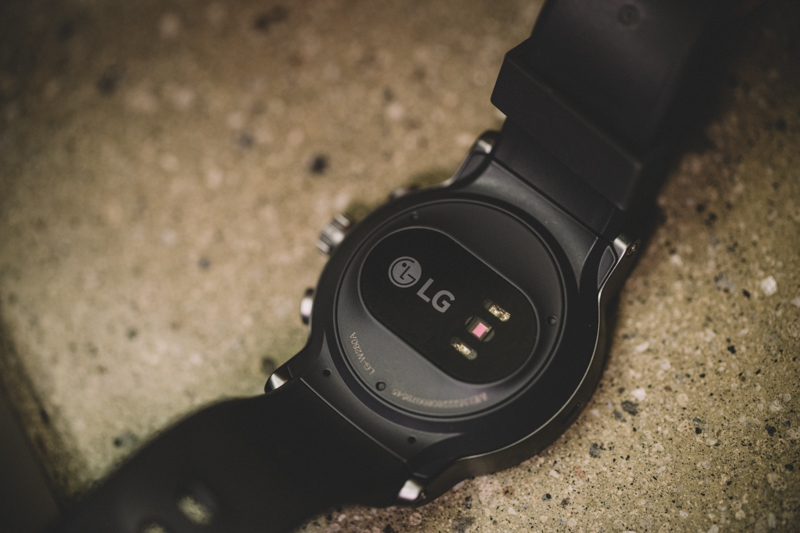 Like the Gear S3, the Watch Sport feels like a company throwing everything it’s got at a product. It’s a bit of a go-for-broke proposition from a company that really needs a big win in a space that has thus far stumbled on take-off. Inside, you get 768MB of RAM and 4GB of storage (same as on the S3), for storing things like music files locally if you want to go for a run without your phone but don’t want to eat away at your data plan.

The processor is a 1.1GHz Snapdragon Wear 2100, which performed whatever I threw at it pretty smoothly. Built-in NFC means you can buy things with Android Pay without pulling your phone out (welcome back Google hands-free), by holding the watch up to a compatible store machine — similar to what’s offered on the Apple Watch and Samsung’s latest offering.

All of this added functionality naturally requires a bigger battery. The Sport delivers on that front with 430mAh to the S3’s 380, though I had trouble making it last. With LTE and the always-on display enabled, I was able to get around 13 hours in real-world testing — enough to get through a work day, but not much else.

When I turned off the always-on screen, however, the number jumped to a far more manageable 18. Not bad, but we really ought to be shooting for at least 24 hours on a wearable. Though perhaps I’ve just been spoiled with the three-week battery life I’ve been getting on the Withings hybrid I’ve been wearing around. It’s also worth pointing out that the watch has a tendency to heat up when doing more resource-intensive tasks like making phone calls. 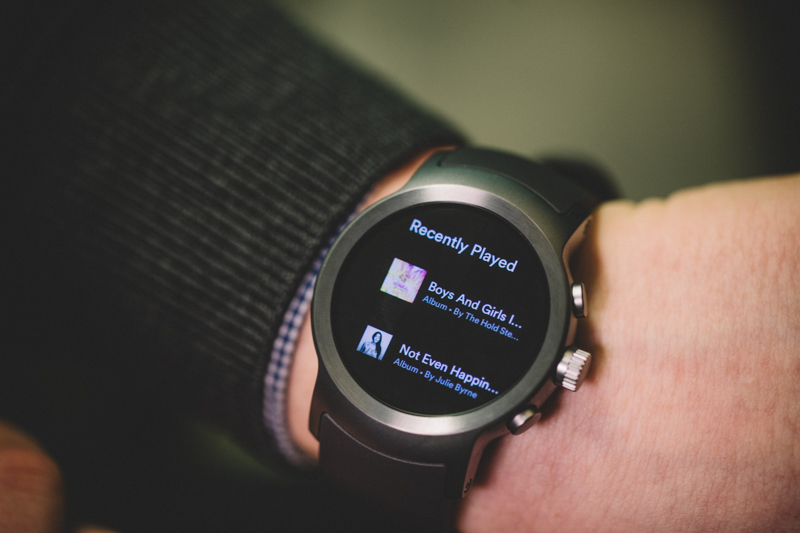 This is what we’ve all been waiting for — Wear’s biggest since 1.0 was released in 2014. So, what’s new? I recommend reading Frederic’s report for the full breakdown of new features, as we’re only just going to touch on it here as it pertains to the new watch.

This latest upgrade seems designed more to bring Android Wear up to speed with watchOS and Samsung’s in-house version of Tizen. Nothing here moves the ball forward for smartwatches in general, so much as it puts Google’s wearable OS on a level playing field with the other two major players in the space.

Aside from some of the added hardware benefits mentioned above, the updates go a ways toward improving the device’s overall usability, between the addition of the dial functionality and quick single swipe access to settings, notifications and watch faces. 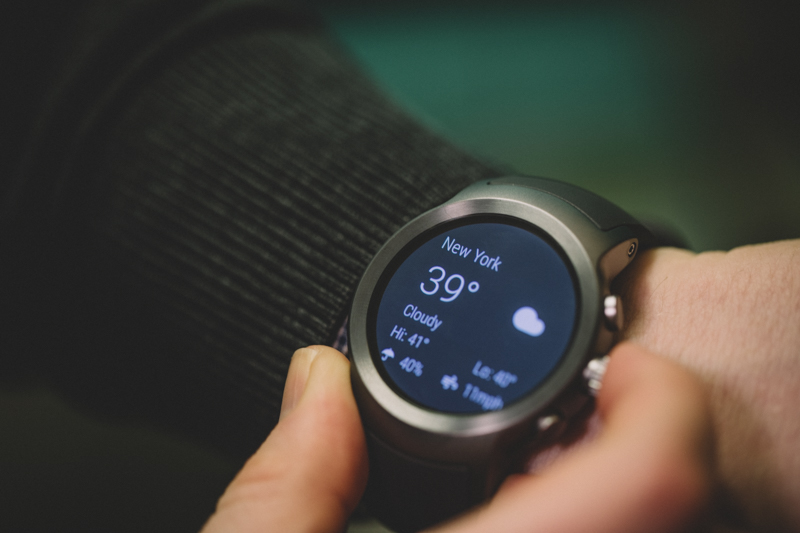 The watch faces are much more dynamic this time out as well, with modular segments that let users customize what content is served up to them on the home screen, like fitness data, app shortcuts, appointments and the like. It’s similar to the toolbar on a smartphone, letting you move your most used functionality front and center. Definitely one of the more handy additions to the operating system.

Google Assistant can be accessed with a long press of a dial, and the functionality works pretty well. You can check the weather, find sport scores, call an Uber and the like with a quick voice command. The recognition works well and the integration is nice and deep. Given the limited screen real estate, this is the most logical way to interact with the gadget. 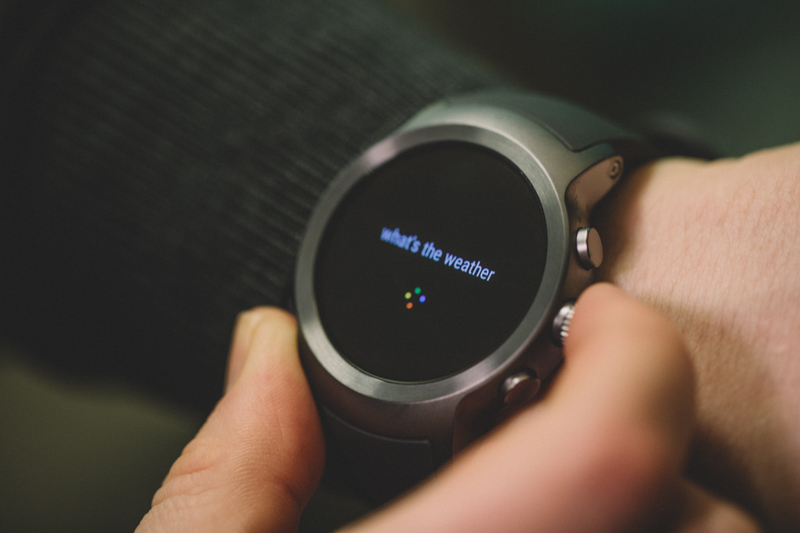 That said, Google also added an onscreen keyboard, which works surprisingly well for such a small thing. Even so, unless you’re responding in an extremely curt fashion, it’s not all that handy. Anything beyond a few words is a bit of a chore. As with watchOS, Wear also sports some canned responses, along with a drawing function for jotting down quick emojis, so there’s no shortage of ways to try to bypass the problem of small screens.

So tired of waiting 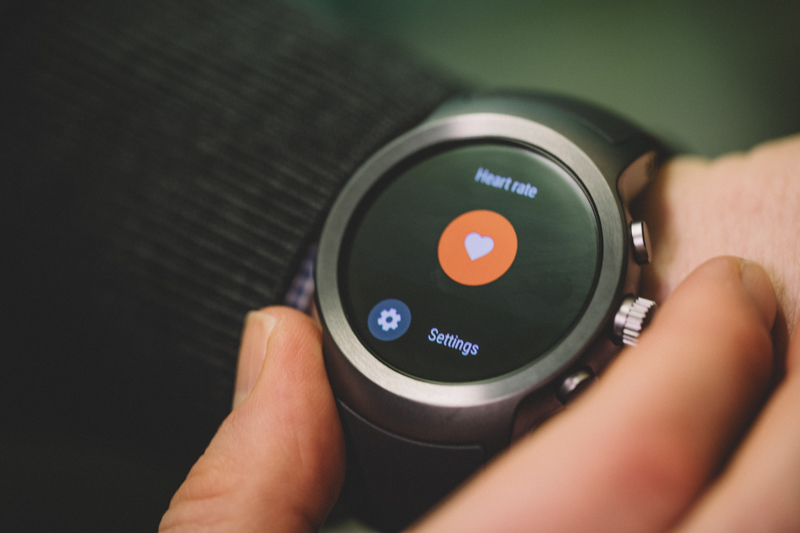 In early 2017, the smartwatch category could use a savior. The LG Watch Sport is, however, sadly and unequivocally not it. For starters, it’s simply too large for most wrists. Users can opt for the Style instead, but will be losing out on some key functionality in the process.

There are some nice additions this time out. LTE is a good option to have, even if it will likely continue to be a relatively niche portion of the already niche space. The dial navigation coupled with added menu functionality makes the system much easier to use, and Assistant is an unquestionably handy addition.

The lackluster battery life is definitely a ding against the watch, as is the general lack of anything exceptional from a hardware standpoint. If you weren’t convinced you needed a smartwatch before, LG’s new offering is very unlikely to tip the scales. Ditto for Wear 2.0, which brings some welcome changes to the operating system, but doesn’t do much to change the dialogue.