Social media plays a large role in politics today, from the election of Donald Trump to those now resisting his policies, such as through the grassroots-born movement that was the Women’s March on Washington. The movement began as a Facebook page for frustrated voters, then morphed into an event that drew in an estimated 5 million participants, thanks to its sister marches beyond D.C. and around the world. Now, the organizers of the Women’s March have launched a feature on their website in an attempt to harness the power of social media for their own purposes, outside of Facebook’s walls.

The organizers this morning announced the launch of Next Up Huddles, community gatherings that will be held from February 2nd through 12th, 2017. The goal with the huddles is to turn first-time activists into committed participants across a range of issues, including civil rights, healthcare and the environment. 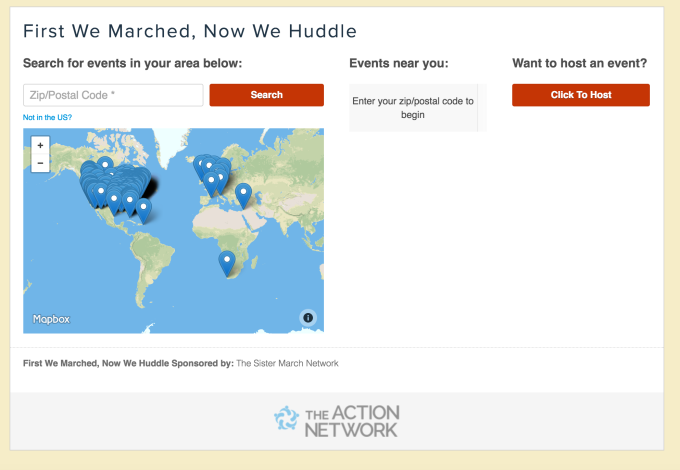 Instead of Facebook pages, events or groups, interested participants are being redirected to a new page on the Women’s March site, which has you first enter your zip code in order to locate the events nearby. If none are in your area, you can also choose to host an event yourself. It’s basically a bare-bones version of Meetup.com for the Women’s March supporters.

The organization will announce actions and activities that these smaller groups will help to carry out, including things like building out local action networks and working toward specific state and federal agendas, it says.

When you find an event you want to attend, you click a button to RSVP and register. But this all takes place directly on the site. Facebook isn’t involved.

Whether or not the Women’s March can capitalize on the nascent power of its movement without the network effects of Facebook, however, remains to be seen. The March itself gained exposure and attention through the organic sharing that takes place naturally on the social network — a site that now has 1.86 billion users. It’s a risky move to relocate both the event-finding and sign-up process off of Facebook, where these registrations and “interest” will no longer show in the News Feed.

According to the organization, however, the transition is going well. The feature only launched this morning, but there are already 378 of these “huddles” registered on the new site. The huddles are one of the 10 Actions in 100 Days that the group has promised. The first, “contact your elected officials,” is already live.