Zenefits today said it would be introducing new pricing tiers in an effort to simplify them, as well as add new tools for HR managers to ensure that employees are getting their documents in and they are compliant with regulations.

The new tools — and pricing — are another way that Zenefits is trying to differentiate itself as an all-in-one platform for managing employee records and compliance. As Zenefits has had to shake off the perception of cutting corners in order to focus on growth, it’s had to temper back its plans and has instead started to focus on being more of a platform for HR managers to handle their employees and slot in third-party apps that access that data.

“For us the most important thing is the core HR system, the employee system of record with the key workflows around employee hiring, like management and termination,” CEO David Sacks said. “That’s the thing that gives us the right to be a platform. Everyone wants to hook into that stuff. We see that as central. Payroll, we think, is a really important part, and of course benefits are important for revenue reasons. Everything thing else we see as something for a partner to do.”

The first new tool is a way for HR managers and employers to keep ahead of compliance requirements for their employees. For example, that might be flagging when an employee hasn’t submitted their required paperwork after accepting a job. This gives managers an overview of all the employees it needs to get in check in order to ensure that they are compliant with all regulations, Sacks said. And the challenge there, and what might give Zenefits a good pitch to companies, is that these regulations may whip from one requirement to another — requiring the service to be constantly appraised of how things are working.

The second is a documents-management application that gives HR managers a way to track all the documents that employees have to submit for their employers. The goal there isn’t to just offer file storage like a Box or a Dropbox. Zenefits’ documents app instead focuses on the metadata of those documents and tries to ensure that everything is signed and in a file somewhere. HR managers can upload documents on their own or request (or bug) employees to get their documents in on time.

In October, Zenefits opened up its service to developers in order to build applications that would link into the company’s HR database. Zenefits decided at the time that it would be better off trying to build an employee record database with all the attached requirements — such as payroll or document management — and let developers handle the rest. So far we’ve seen developers build tools that manage employee options and 401(k) plans so far, and more are on the way, Sacks said. He said the company has more than 50 companies in their developer pipeline.

While Zenefits may seem at times to sort of be assembling some kind of mess of products — especially as new partners add new tools — they are all ones that HR managers need and have been requesting. The need for simplicity, however, isn’t lost on Sacks, and the company is trying to pare down the complexity of their pricing with a new model that charges per additional service.

“When Zenefits launched originally, it had HR and made money off benefits,” Sacks said. ” In the past year we’ve been launching a bunch of different paid HR apps, and sharpening our focus on HR. We started rolling out more and more paid apps to have a price on every app becomes a little unwieldy. The bundles reflect the way that we expect Zenefits to actually be used.” 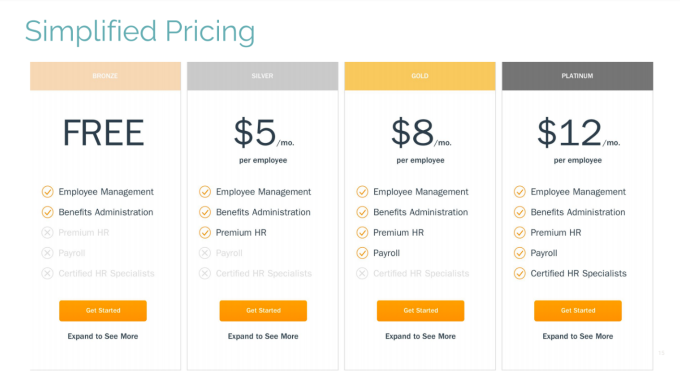 As Zenefits builds more and more tools and tries to simplify the model — making it more attractive for small business — Sacks said products like insurance for individuals (going to the bottom of the funnel) still weren’t something that interests the company. “On the insurance side, that’d be a detour for us,” he said.

Zenefits also said it was expanding payroll to five new states: New York, New Jersey, Connecticut, Colorado and Arizona. It already exists in California, Florida, Texas and Washington. That’s going to, naturally, bring the company in more direct competition with startups like Gusto (which is also gunning for HR) as well as larger providers like ADP. But Zenefits is hoping that as it becomes a more complete suite, it can become a more attractive platform for developers and eventually be more sophisticated.

These moves, while they may seem incremental, add up over time to shape Zenefits into a new company that is going to try to be more sustainable. Zenefits under founder and then-CEO Parker Conrad was tagged for skirting regulations, and since then Sacks has had to take over and rebuild the company into something more sustainable and in line with what regulators are seeking.

It’s started to settle and self-report with some states — with some penalties being more serious than others — and has slashed its valuation in half. Sacks said he would step down in December last year and was looking for a replacement, who will also inherit the daunting challenge of flipping the company into something more sustainable.