Silicon Valley’s most consistently successful old-guard venture firm now makes the majority of its investments outside the United States.

Sequoia Capital, the storied early investor behind such iconic U.S. technology companies as Google, Cisco, Apple, and LinkedIn, has increasingly being setting its sights abroad. The firm invested in 51 funding rounds for non-U.S. companies in 2016, according to Crunchbase data. That compares to 45 rounds for U.S. companies last year.

The shift toward more globally dispersed investments been a consistent pattern over the last three years for Sequoia, which invests out of dedicated funds for China and India as well as principally U.S.-focused and global growth funds. Prior to that, the 45-year-old firm appears to have made most of its investments in the U.S.

The growth in overseas rounds for Sequoia reflects a broader trend of rising global venture investment. Crunchbase estimates that $176 billion went into seed, venture, and technology growth investments globally in 2016, a 19% year-over-year increase. Over the same period, U.S. investment totaled $76 billion. Overall, 2016 was one of the highest U.S. numbers on record, but still down $10 billion from 2015.

Silicon Valley-based venture firms also rank as the most active global lead investors. For 2016, Crunchbase, found that 19 of the 20 firms and corporate VCs most active in leading venture rounds were U.S.-based, though most have investment partners located in multiple countries. (The list includes U.S.-focused, multinational and China-based investors.) 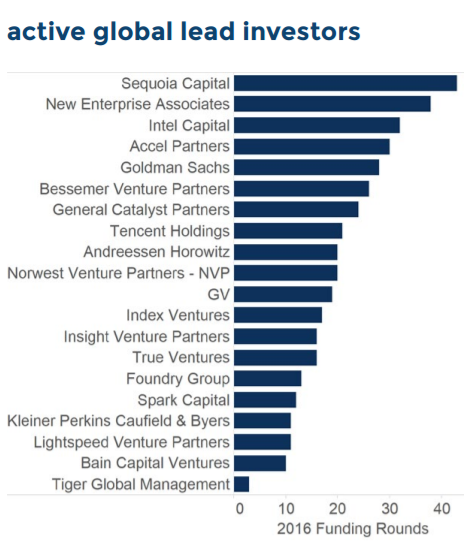 Yet while Sequoia scaled up abroad, several other prominent Valley VCs cut back. Accel, which has dedicated Europe and India funds, along with its larger, mainly U.S.-focused fund, backed 30 non-U.S. companies last year, down from 43 in 2015. Average round size was down as well.

Other large investors, including Intel Capital, Lightspeed Venture Partners, and DCM Ventures, also had fewer overseas investments last year compared to 2015, according to Crunchbase data.
Big multinational VCs have a history of changing course in their global investment strategies. Investment in India, for instance, hit a peak in 2014 before turning lower for the past two years amid concerns of frothy valuations and lackluster exit prospects. VC investment in China, meanwhile, has been trending higher, with Beijing startup investment hitting an all-time high last year.
Firms with a track record of hits also tend to scale up investment in a region, while misses have the opposite effect. Sequoia’s partners have been early investors in a few companies outside the U.S. that have gone on to become market leaders, including China-based mobile internet company Meituan-Dianping and package deliverer ZTO Express, Europe-based payments provider Klarna and Indonesia-based ride-hailing and delivery app Go-Jek.