When Cisco bought AppDynamics last night for $3.7 billion, it was initially a bit of a shocker, partly because of the timing, just days before the startup was scheduled to IPO. While the acquisition was clearly part of a longer term strategy by Cisco to shift focus from its hardware business to one based more on cloud software, at its core, the deal was a pure data play.

Data has taken center stage in today’s enterprise. It’s become cliché to say that ‘data is the new oil,’ but like all clichés, it’s developed because there is a ring of truth to it. As companies shift to artificial intelligence and machine learning, these are technologies that live and die by copious amounts of quality data.

Why did Microsoft pay $26 billion for LinkedIn? Why was Salesforce willing to go the mat for a chance to buy Twitter last year, before it fell through? It’s all about the data — and Cisco spent $3.7 billion of its treasure for AppDynamics yesterday for the same reason.

What AppDynamics gives Cisco is a tool for monitoring the performance of applications, regardless the application delivery platform. The idea is to find issues and deal with them before they become a big problem for end users. The worst case is a full outage, but there are countless other issues that can cause slow-downs and other headaches, as every user is keenly aware. As it monitors these applications, AppDynamics is gathering tons of data about the applications, the connections to other systems, the devices being used to connect to the application and so forth. All of this data is a natural byproduct of the monitoring process — and could have great value when combined with other network information. 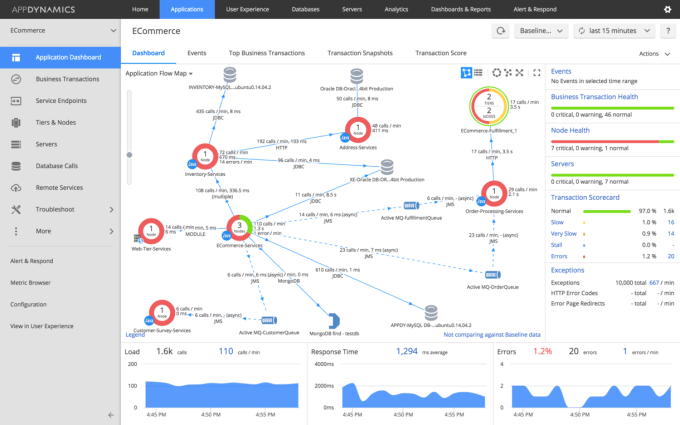 In a blog post announcing the deal, Cisco’s VP of corporate business development, Rob Salvagno cited the AppDynamics data as a big reason for the purchase. “As companies across industries are expanding their digital infrastructure, IT departments are faced with vast amounts of complex, siloed data. AppDynamics helps many of the world’s largest enterprises translate this data into business insights and empowers them to drive value for their customers in today’s digital world,” Salvagno wrote.

Ray Wang, founder and principal analyst at Constellation Research, says that it was critical for Cisco to find an M&A candidate that could handle the future of apps in-network, but he says this deal is about more than pure applications performance management.

“The long term play is when you add this type of software onto the network, you gain network intelligence and more importantly a critical piece for IOT, as well as building a long-term neural network and machine learning story,” he said.

The Jasper Technologies purchase gave them that IoT piece. AppDynamics gives them a view of the applications running on top of that, and while all of that is useful in itself for the short term, Wang believes that this will ultimately be part of a more automated approach in the future, driven by the growing amounts of data and the complexity inherent in managing all of that.

“Companies ultimately don’t want to be monitoring apps and the network in a manual fashion, but to predict, prevent and deliver situational awareness,” he said.

Speaking at a press and analyst event today, AppDynamics CEO David Wadhwani acknowledged this was in fact the long-term vision for the platform. “We are moving from systems of records to systems of engagement — and that is the short and mid term. [Looking further out] we are moving to systems of intelligence when you rely on automation and machines to make decisions in real time,” and that’s where they ultimately see it going, he said.

If he’s right, you can look for more M&A from Cisco moving forward to acquire the artificial intelligence underpinnings it’s currently lacking. “The acquisition gives Cisco a place holder into this market and a better software story,” Wang said, but it’s only a foundational piece, not the entire solution.

With Jasper and AppDynamics (and its own understanding of the underlying networking infrastructure), Cisco has plenty of data. Now it needs to fill in some of the other pieces, and begin to put that data to work in a more automated way. While it’s possible to do that now to some extent, the real power could come if they add the missing artificial intelligence technologies.