The next mainstream computing platform may not be bots, AR, or VR, but rather voice-based computing. According to a new state of the industry report from VoiceLabs, it’s estimated that there will be 24.5 million voice-first devices shipped this year, which will lead to a total device footprint of 33 million devices in circulation.

If the prediction holds true, this would be a remarkable increase from the 1.7 million voice-first devices shipped in 2015 and 6.5 million units shipped last year.

Voice-first devices includes products like Amazon Echo, Amazon Tap, and Echo Dot, as well as later arrivals like Google Home, for example. And VoiceLabs expects that at least two of the three other major tech companies – Apple, Samsung or Microsoft – will also ship a voice-first device in 2017, contributing to its estimates.

Amazon is leading the market in this space, currently, as consumers embrace voice computing as a natural way to interact with machines. Amazon Echo sales were estimated to have reached over 5 million to date ahead of the 2016 holiday season. Afterwards, Amazon said Echo family device sales were up over 9 times from last year’s holiday season, and that “millions” were sold worldwide during the year.

The new report estimates there are now over seven million Amazon Echo devices in consumers’ homes.

What’s also notable about this market is that it has high consumer lock-in. That is, only 11 percent of survey respondents who owned an Echo or Google Home said they’d buy a competing device. 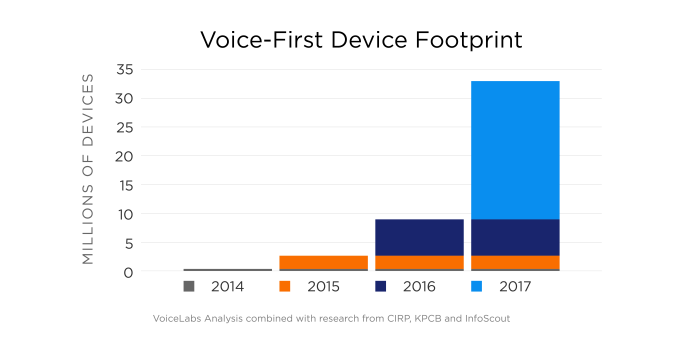 “Therefore, while not a winner-take-all market, in 2017 VoiceLabs predicts it will be a winner-take-entire-household market,” the report states. “This puts pressure on the hardware providers to distribute devices quickly.”

Contributing to Amazon’s success in this area of voice computing is its know-how when it comes to selling consumer electronics, which gives it an edge in distribution. Meanwhile, it has also made it easy for developers to build Alexa voice applications for its Echo family of devices, and has invested in tools for application development.

In terms of sheer volume, the News, Trivia and Educational categories are currently dominating, but in terms of real-world use, many apps are basically “zombies.” Only 31 percent of apps have more than one review, which indicates they’re not being heavily used.

When it comes to the use cases that are resonating with consumers, Music Streaming & Books, Home Automation, Games & Entertainment, and News & Podcasts dominate. 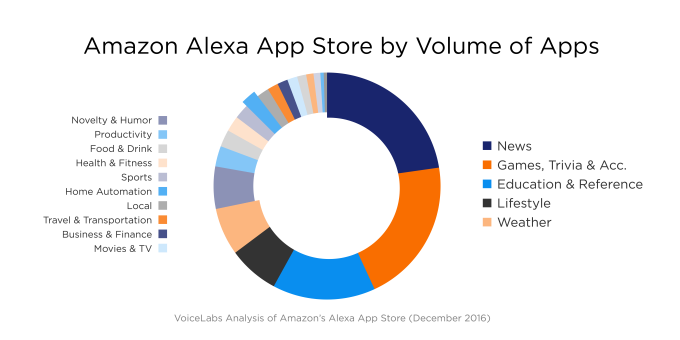 This year, VoiceLabs predicts the Smart Home use cases will continue to grow, and there will be innovation in the Games & Entertainment categories, too.

For now, the platform owners, Amazon and Google, are able to heavily influence app discovery. Featured Alexa skills can expect a 200 percent increase in new users while being promoted, and VoiceLabs says that it has seen ranges between 500 and 250,000 new users on a per application basis.

On Google Home, there’s a similar trend. Featured Actions can expect a 290 percent increase in new users during the promotion cycle, with Actions seeing between 1,600 and 3,100 news users on a per application basis. 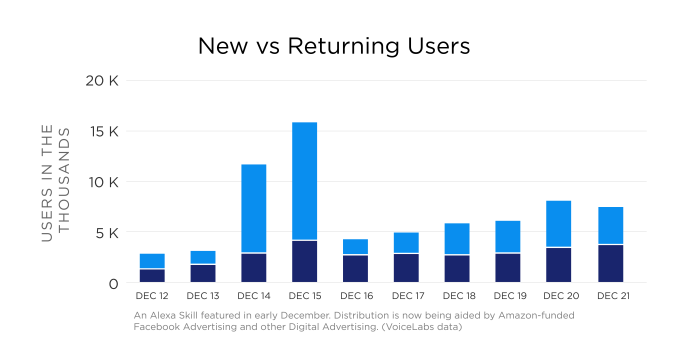 But most applications, save for a few outliers, are struggling to retain users, the report found. There’s only a 3 percent change that users are active in the second week after adding an app.

In addition, the apps aren’t yet able to monetize – a challenge the reports expects Amazon and Google to address by the second quarter.

2017 may be a milestone year for voice-first computing, which is a category that goes beyond the in-home smart speakers. There’s also the battle of the virtual assistants which live on desktop, tablets, smartphones and TV streaming players, like Cortana, Siri, Google Assistant and Alexa, while other devices like Apple AirPods let you better utilize voice computing while on the go.

The report summary is available via the VoiceLabs website here, or in full upon request.