Sex toy maker OhMiBod just announced that the company is looking to open up its relationship… with developers. Best known for its digitally connected vibrators, OhMiBod will release an open SDK to accompany its latest line of devices this spring.

The company notes that some creative apps could tie the company’s line of sex toys into hookup apps like Tinder and Grindr, making for some far more interactive new ways to swipe right or #masc4masc.

OhMiBod founder Suki Dunham lays it out for us:

“Imagine you’re on a dating app and chatting with a potential partner — and they are “OMB enabled” (e.g. pink dot on the screen that signifies a user is in an “active” state much like Facebook Messenger. If they are active, it means that they are connected to one of our BlueMotion vibes.

We’re inclined to agree that, yeah, if there’s any developer interest, that could be pretty interesting. Of course, OhMiBod is just one school of fish in the cyberdildonics sea. There’s not exactly an established platform for sex toy developers, so things remain pretty brand and device specific, at least until someone like OhMiBod attracts devs to an awesome open standard that manufacturers team up on. Or until all of our smart vibrators are hijacked into weird, sexy botnets, whichever comes first (ha). 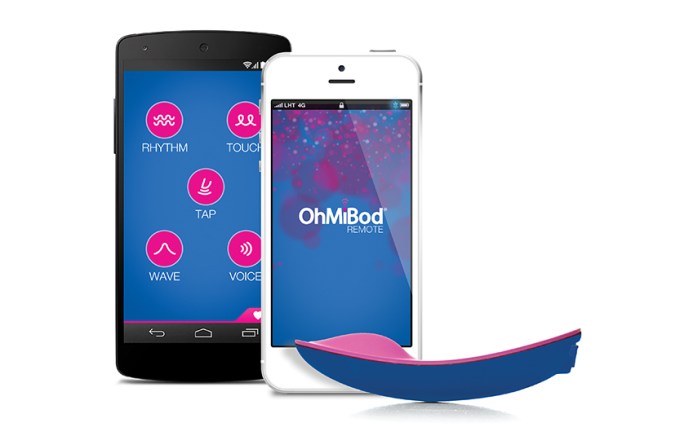 OhMiBod has been paving new paths for good old-fashioned cybersex for a while now. The company’s trademark is its line of smart sex toys that allow remote users to connect, like the BlueMotion NEX 1, which the wearer can slip inside their underwear to get sneaky sensations from their own paired device or from anyone else on their Wi-Fi with the companion app.

It’s not hard to imagine all kinds of interesting apps that could connect remote users to toys and to one another. With the advent of smart sex toys, virtual reality and increasingly sophisticated haptic feedback, digital kink is entering a new era altogether.

OhMiBod’s SDK will be available in late spring alongside the company’s upgrade of its BlueMotion vibrators to Bluetooth Low Energy (BLE). In the meantime, developers can sign up to receive updates from the company about its forthcoming SDK here.