No sensors in the room, no cables, and vision processors strapped to your face, not the computer next to you: today, Intel showed off its first version of the Project Alloy headset, a new wearable computer that it describes as its foray into “merged reality” — a combination of virtual reality mixed with augmented reality. In this case, it will deliver both video content that will immerse you, and augmented reality that will project images of some of that content directly into whatever room you happen to be in.

Project Alloy will start to ship in Q4 of this year, Intel CEO Brian Krzanich announced during a keynote at CES in Las Vegas today. This is a relatively quick turnaround for a headset and project that was only made public in August of this year.

It’s one of many steps Intel has taken to position itself as a prominent player in wearable computing, which is one of the key areas where the company hopes to carve out a leading position as it attempts to move its business into the future of computing and away from legacy areas like PCs. 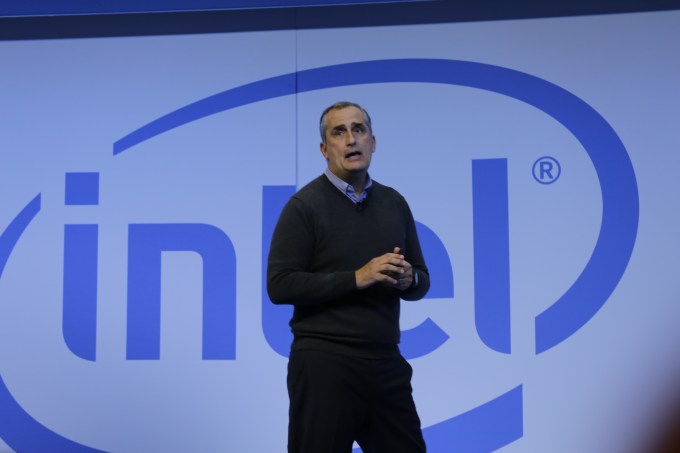 The idea here is straightforward. Devices like the Oculus — which Intel is also using during the press conference, with a headset in each seat — rely on being tethered to a computing system (here they were attached to massive, heavy laptops); other services like Microsoft’s Kinect require physical hardware sensors to get their spatial bearings. The Alloy aims to put all of that kind of computing into the device itself.

Each device will feature an Intel seventh generation Core processor, a vision processor, fisheye lens and sensors, two RealSense cameras and an on-device battery, and will be built in conjunction with a number of partners. Krzanich did not say who the partners would be, but the company has made several acquisitions and partnerships in the last year — they include buying immersive sports VR company Voke and a three-year content partnership with the Spanish soccer league LaLiga.

Intel did not disclose the projected price of the headset, nor whether the first device would be a developer model or a fully-fledged consumer product.

If Project Alloy was all about the possibilities of where VR and AR will eventually be going, the rest of the press conference was focused on trying to ground people in some real-world examples from today.

At a time when many people still wonder if VR will ever take off amid the claims that there are not enough compelling use cases for virtual reality services, today Intel took people through a series of examples of where VR experiences could be relevant, and “save time, money and lives,” in the words of Krzanich, “solutions that we believe could bring value to the end user.”

Each seat at the press conference today was a leather easy chair, with small tables in front of each holding a Razer Predator laptop (gaming company Razer being one of Intel’s big investments), Oculus headset, and motion sickness bag.

This laid the groundwork for Intel to take us through a series of VR scenarios that included a look at a travel experience in Vietnam produced with HypeVR that took attendees to a remote, countryside waterfall and skydiving in Utah; and a basketball game, which you watched court-side. Perhaps the most notable was live VR footage shot from a drone hovering over a massive 2,000-acre solar power plant in the Nevada desert — implying some of the industrial uses for the headsets.

The drone hovering over the solar panel was the first time that 250 people in one place had performed a live industrial inspection using 360-degree, 4K video, Intel said, making this the most technically challenging press conference it had ever run, but it’s not clear whether this is a one-off high water mark or new bar for what we will expect to see in all conferences of the future.

In any case, it seems like the experience for users will continue to expand: Kzranich noted Intel projections that by 2020 the average person will generate 1.5 gigabytes per day of data, up from 650 MB today — but that computers will nonetheless continue to shrink to make this manageable. “Moore’s Law is alive and well today,” he said.