Disney-ABC is going after cord cutters with the launch of a suite of streaming TV apps for the Fire TV, aimed at bringing ABC stations’ local news to those who don’t pay for cable. The company this week launched eight apps that cover all its ABC-owned stations, each delivering local news to that market, along with weather, community news, an evening video digest with the day’s top stories, and even a “Feel Good” section with upbeat, inspiring stories to take the edge off.

The move is a notable investment on ABC’s part to reach the cord cutting audience, who are often lacking for local news.

Without using a digital antenna to capture free, over-the-air stations, many cord cutters simply forgo watching local content when streaming through apps on their connected media players. But the station apps are free, and don’t require a subscription to use, notes ABC, which will allow them to attract a wider audience. 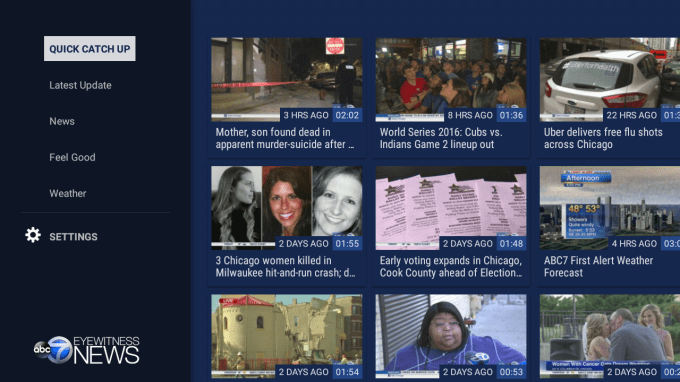 Of course, ABC’s main app also offers live local news programming, but the new local apps are focused on offering a different type of experience. Instead of live streams, the apps’ navigation lets viewers browse through sections like “Quick Catch Up,” or “Latest Update,” depending on what sort of news they’re looking for at the time.

But because these curated news stories are not live streamed, some viewers may be frustrated that the content doesn’t feel as current as it could be.

The company said the decision to launch these apps was prompted by the sizable increases Disney-ABC has seen on connected devices in the past year. By launching on Fire TV, it’s hoping to capture those lost viewers who are no longer tuning into their local news channels.

The new apps are available for download from the Amazon Appstore.