You could argue that 2016 was the breakout year for Amazon’s cloud computing service, AWS — and Wall Street knows that an even bigger wave is coming next year.

Amazon’s retail business continues to grow, and chug along, and gobble up share from offline commerce and other companies desperately trying to up their e-commerce game. And that’s all fine and good — that’s what Wall Street has come to expect from Amazon. What might not have been expected, though, was just how big AWS would be and how fast it would grow to become that big.

We got a brief taste of it in April this year in the company’s earnings report, which showed Amazon Web Services was clearly on a great clip and on its way to being a business that generates more than $10 billion on a regular basis. And since then, it seems more and more obvious that the AWS bet that Amazon made years ago is going to pay off in spades as a strong core business that’s going to have great scale without the insane overhead costs of its core retail business. Each quarter we seem to see continuous success from AWS — and continuing heavy investment in that operation.

Here’s a quick snapshot of the current state of AWS from the company’s most recent earnings presentation: 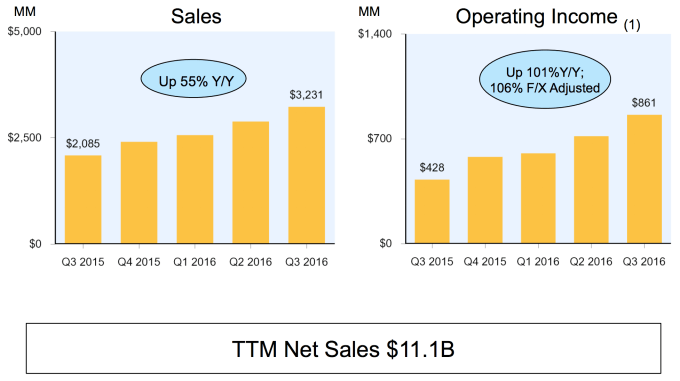 The raw efficiency of AWS is going to be something that Wall Street is salivating over as Amazon continues to diversify itself beyond just its standard retail operations. Wall Street loves companies that have multiple different kinds of revenue streams that operate efficiently in parallel or are even perpendicular to the core business, but still give the company a strong way to continue to deliver value.

And Amazon knows it. Earlier this year, Amazon held an event where it unveiled a slew of new products designed to give AWS users more flexibility, streamlining the process of getting their data into Amazon’s servers. One extreme example is literally driving a truck to the front door of an office to transfer that data, but that just goes to show the lengths that the company is going to go to in order to get more and more companies signing up for AWS.

It’s hard to understate the importance of AWS, especially as competition aggressively ramps up. Microsoft and Google are increasingly trying to encroach on Amazon’s turf, where the company essentially defined what this style of cloud computing looks like and offered startups a way to quickly roll out their products for a much lower cost than buying their own infrastructure. And now, Amazon is looking at a business that is already generating more than $10 billion on a trailing twelve-month basis.

So, in short, it’s going to be a way that Wall Street is going to be looking for continuous growth from Amazon much in the same way it’s always looking for growth in its retail operations. We’re coming up on the holiday quarter, so we’re going to see what Core Amazon looks like in the face of a critical season, but nonetheless AWS represents one of the most important elements of the company as it goes into 2017 and a growth moment that pretty much defined Wall Street’s observations of the company in 2016.

So, that’s enough about AWS. Let’s talk about Amazon proper.

This year another rather special thing happened for Amazon, too: It recorded multiple straight quarters of profit. Sure, it wasn’t the same kind of profitability you might see from Alphabet or Apple. For a company that is known to just rapidly invest and not worry too much about profits, it gave Wall Street a taste of what a profitable and efficiently operating Amazon might look like:

Online retail is still just cracking the surface of pulling dollars away from brick and mortar, so the overhead for Amazon’s retail business remains very high. If Amazon continues to close that time gap of getting a product in the hands of consumers following an order, it’s going to continue to see additional traction there. Wall Street is naturally looking for that continued innovation, but it’s clear that Amazon’s proper business is continuing to grow. (And maybe that will come from drones, even — though let’s hope your new Amazon Echo doesn’t fall on your head.)

Amazon, also, has the advantage of being able to stay ahead of traditional brick and mortar that are trying to expand to e-commerce. Walmart realizes the potential existential threat it faces and is trying to expand its e-commerce operations, but it might just simply not be fast enough to get to Amazon. It will to some extent come down to the number of SKUs each company can offer, but Amazon has a huge lead on Walmart in terms of an e-commerce branding and also in terms of the ancillary services it can offer on the back of that branding and the efficient operations that it’s set up.

So, all looking good for Wall Street again. But we have to pivot back to AWS for just a second, which as we can see while Amazon is now generating an income though small, it’s pretty clear that AWS is a significant contributor to that income.

So, now we have a company that in 2016 had a core new business that continues to not only grow rapidly but also at a very efficient rate. And we have Amazon retail operations that continue to grow, and an income stream that once again allows the company to continue to invest in new operations, like once again closing that time gap from an order to getting a product in a user’s hands. We’re looking at an Amazon that in 2016 showed a huge amount of continued potential while those bets are starting to play out materially.

Understandably so, Amazon’s stock has seen a rather spectacular rise on the year as we start to get a look at what Amazon looks like after all its huge bets are starting to pay off. The company’s shares are up around 15 percent in the past year.

Amazon is, of course, not just going to rely solely on its retail operations. And even though AWS is wildly successful, getting users to get stuck to the Amazon brand — whether that’s through Prime or something else — gives it the ability to monetize its users in new and unique ways. One of the most natural ones is a strategy that’s played out well for Apple and Amazon: sell media products. And so far, it looks like it’s generating a decent amount of revenue: 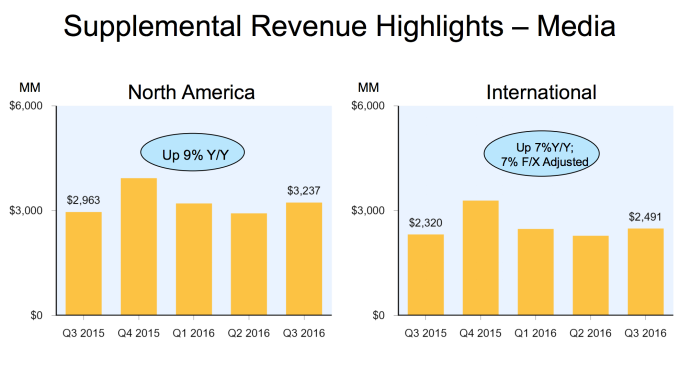 Again, not huge, but not trivial. The overhead costs of acquiring new media are usually high, which again highlights the shining points of AWS. But Amazon is clearly continuing to make other bets in its business — much like it made an early bet on AWS — that hopefully will pay off in the future. Again, Wall Street loves diversity, and Amazon appears to be hoping that this is something that’s going to be good for the company moving forward.

So for 2017, Wall Street is going to look for continued growth. Amazon has a great product in AWS and great branding among smaller companies, offering startups a way to jump-start their services. But it needs to not only ensure it gets those startups, but also keeps them and goes upstream. And there’s the looming shadow of Microsoft and Google — which the latter was able to capture Snap’s business (issues aside).

But in short, 2016 was a breakout year for Amazon — and in particular AWS — and is showing Wall Street pretty much what we knew all along: the FANG (Facebook, Amazon, Netflix, Google) acronym exists among investors as growth stocks for a reason and we’re going to see a lot of continued potential for Amazon.