Twitter ditched its stars in favor of hearts to “like” Tweets, and now, to get more people using Twitter, it is considering replacing its iconic “Retweet” button. TechCrunch has learned and confirmed that Twitter has been testing a new version of its mobile app that drops the current Retweeting icon, along with the arrow for replying to a tweet, and respectively replaces them with a circular icon for “sharing” options and a speech bubble:

These are the current icons, for reference:

Twitter confirmed the test to us, adding that it was trying to see how it changed behavior on the site.

“We’re testing new icons on Tweets to evaluate how this impacts the way that people use Twitter,” a spokesperson said in an email.

With the new sharing button, the current two choices of “Retweet” and “Quote Tweet” will be augmented by two more options. As noticed by Twitter user @lasersushi and appearing here in German, the new menu is Retweet, Quote Tweet, Send by Direct Message, and Share Tweet (taking you to the usual menu to share that you get today). 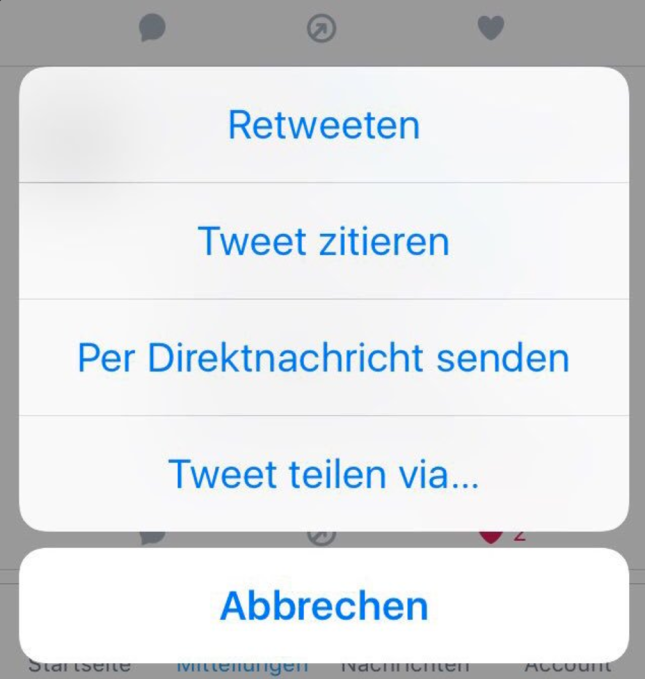 This is not the first time that Twitter has mulled replacing retweets with sharing. Back in 2014, it also toyed with the idea, although, it seems, without a change to its iconography.

The retweet has been a core part of the Twitter experience from early on, as a way to share content you’ve seen on the service more easily. Twitter has made moves to update it over time to encourage more use of it. For example, in June it started to let users retweet themselves.

Why test out a new way to share? Twitter’s test to roll up and expand sharing options points to how the company, which currently has 313 million monthly active users, has continued to try to figure out better ways of making the service more mainstream and less full of its own jargon.

Critics say that Twitter-specific lingo and special way of doing things puts off new or infrequent tweeters from using the service more regularly, or maybe ever coming to the platform in the first place. Specifically, there is some confusion among some users around the icons on the mobile apps.

And so Twitter is looking to more established social media norms for the solution. Just as Twitter moved to a heart icon from a star to get closer to the universal term of “like” (versus “favorite”) as a way of endorsing something you see on social media; now it’s seeing if “sharing” gets more people to be more social with Twitter content.

It’s the same reason Twitter would change the reply arrow to a speech bubble: Twitter is looking for more understandable iconography, and having too many arrows was, again, confusing to anyone less familiar with Twitter beyond very regular, existing users. Having a speech bubble icon may also prove to remind people to react more frequently, boosting engagement — a key metric that Twitter, as an ad-based service, needs to grow (especially since user growth has largely been flat).

It’s interesting, incidentally, to see how Direct Messaging has been downgraded a bit in this new test version. It’s still there as an option, but you now have to go into the sharing menu to access it rather than directly through the envelope icon. It makes us wonder just how much that (still pretty new) DM icon is being used; and also whether Twitter may have something else up its sleeve with DMs. (Perhaps the long-fabled, standalone Direct Messaging app?)

Direct messaging is definitely an area that Twitter is focusing on, although it’s hard to guess what the current thinking might be for where it will ultimately go. Or even if there is a cohesive, greater strategy at play, considering reports that it apparently killed off another standalone messaging project in India.

Unsurprisingly, among some of the power users seeing the new version, at least some don’t really understand why Twitter is tweaking.

they changed the retweet icon??? literally why pic.twitter.com/zy9YldsV1b

Indeed, if this gets rolled out to everyone as a permanent change, it is unlikely to be popular among long-time users and Twitter purists. But remember that the move from stars to hearts was vehemently opposed and it is now an established part of Twitter, so never say never.

In any case, this is a test, and we’ve heard from an insider that there are “a bunch” of tests that are being tried out at the moment, so it’s anyone’s guess what might stick. If you’ve seen something new pop up in your own Twitter experience, get in touch and tell us about it.