Food delivery startup Munchery is trying its hand at brick-and-mortar sales, opening a pop-up shop in San Francisco that we spotted this week.

In the competitive and cluttered market for online food delivery, Munchery is distinct in that it sells chef-prepared meals that just need to be heated, or meal kits with recipes and pre-measured ingredients to its members and other customers.

There are meal kits with pre-measured ingredients from the likes of: Blue Apron, HelloFresh, Plated, and the Purple Carrot. For companies like this, refrigeration, recipes and packaging matter more than heat and speed.

Then there are meals delivered to groups of employees where they work including EatClub, Farm Hill, ZeroCater and Zesty. For these companies, heat and precise timing of deliveries matters more.

And of course, there are platforms that enable online ordering of food from a wide variety of restaurants, like pioneers Grubhub (which also owns Seamless), and Groupon-owned OrderUp which operates in smaller cities. 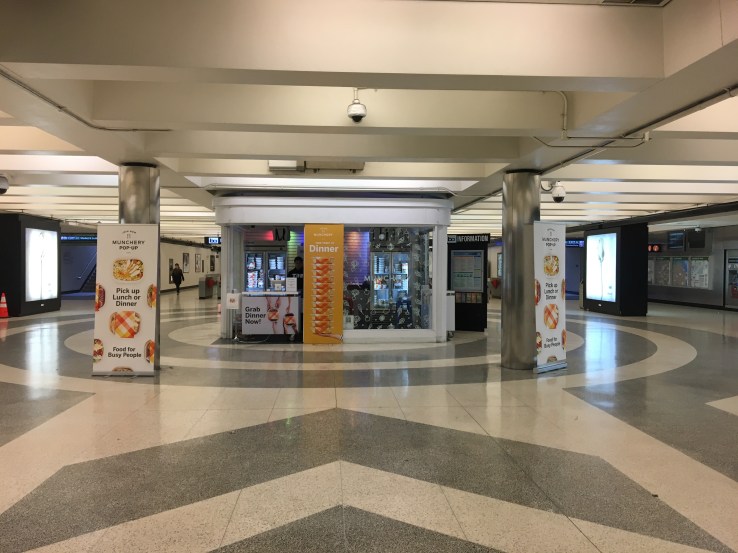 Munchery’s physical retail effort could be as much about branding as it is about expanding into a new sales channel. Having a presence and giant signs in a well-trafficked subway station should ostensibly lead to better brand awareness, at least, if not an increase in food sales for Munchery.

Underscoring the competitive nature of the food delivery business, one floor below the Munchery pop-up shop, Grubhub was advertising with subway posters. One featured a 20-something guy tucking into a piece of pie, a take-out box on the table beside him. The slogan reads, “Mmm, just like mom used to order.” Cute stuff.

A company representative said  that Munchery will use the San Francisco-based pop-up shop as an experiment of sorts. If it succeeds, they’ll open pop-ups in other cities. The pop-up will also sell meals that aren’t yet available on the site or app, yet, and if they sell well it may add them into the mix.

If its pop-up experiment works, the company will have successfully adapted a move from e-commerce players in fashion to the food world.

To help scale their startups, apparel and accessories brands like Bonobos, Everlane, the Tie Bar and Warby Parker opened pop-up shops or their own storefronts where their products could be purchased, or at least tried on then ordered from a tablet to be shipped home.

As we recently reported, Munchery has been reportedly struggling in recent quarters, leading to the appointment of a new CEO at the company in November, James Beriker. The company’s cofounder and former CEO Tri Tran has moved into the Chief Strategy Officer role.