When Facebook originally launched its photo-sharing service Moments, the idea was to offer friends and family a better way to send each other photos without having to post them more publicly on the social network itself. The mobile app has since become a moderate success, ranking No. 171 overall on the iTunes App Store and No. 131 overall on Google Play. Now, Facebook is making Moments a more prominent part of its desktop web experience, as well.

The company had already rolled out limited web support for Moments earlier this fall, when it introduced a way to send a Moments link to a friend. When clicked, this link would take them to the private online album you wanted to share. The additional feature made it possible to share photos with people you weren’t already connected with on Facebook, and allowed them to join the album to add their own photos.

The launch had followed a similar move from Google Photos, which had improved its own shared albums feature to allow users to add their own photos to albums when they received a link. At the time, Facebook Moments was limited to sharing among Facebook friends, so the new feature was something of a catch-up attempt.

Now, Facebook is making it easier for Moments users to view photos when they’re not on their phones.

The company says this lightweight version of Moments for the web was being tested earlier, but is now available to everyone. 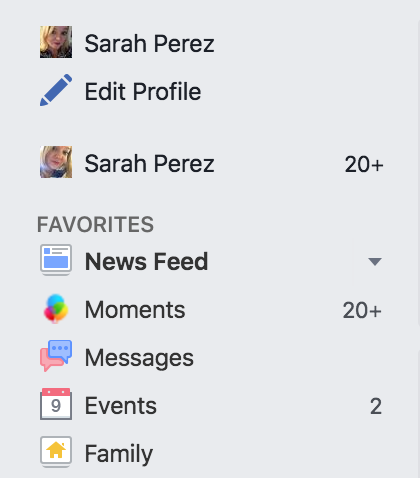 The web version of Moments is available from the left-side navigation on the social network, and takes you to a collection of the private photo albums on the photo-sharing service.

This online version of Moments is a much more lightweight experience that what’s available via the mobile app — basically, you can only view the shared photos here, but not much else. If you want to add your own photos to an album, leave likes or comments or create slideshows, you’ll need to download the mobile app to your iOS or Android device.

The album homepage heavily promotes the app, too, with a big blue button that will direct you to the app’s download page.

Bringing Moments to the web makes sense because of how deeply tied Moments is with Facebook itself. When you share photos with someone in Moments, they’re alerted via Facebook’s notifications and in Messenger. 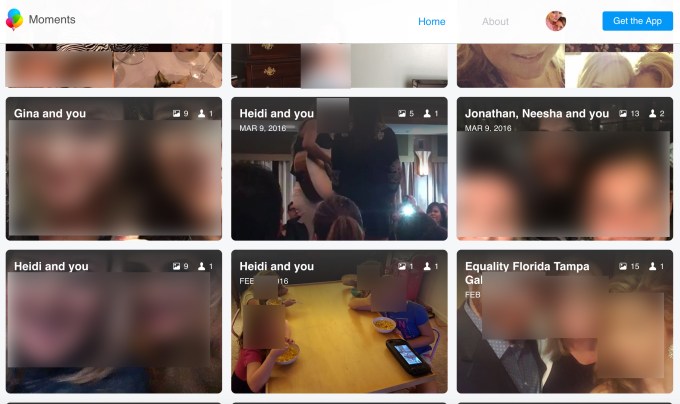 Additionally, because Facebook retired its mobile photo-syncing feature in favor of Moments, it’s helpful to have a way to gain access your mobile photo uploads when you’re using Facebook on the web, too.

It’s clear that Facebook wants Moments’ web version to be a simple way to promote the accompanying mobile app without conflicting with Facebook’s own photo album sharing feature. However, as a web app, Moments isn’t very useful today — which is frustrating, given its potential to become a private social network of sorts that lives within Facebook itself.