Netflix’s decision to introduce an in-app subscription option in its iOS app over a year ago has helped the streaming service steadily gain more subscribers, and surge up the Top Grossing charts in the Apple App Store. Back in November of last year, the app hit the Top Grossing chart for the first time, reaching the No. 9 position. Today, Netflix has reached another milestone, as the app has earned the No. 1 Top Grossing spot on the U.S. iPhone App Store.

Its bump up to the top spot was spotted by app intelligence firm Sensor Tower, which has been following its climb since the introduction of in-app subscriptions last fall. Between then and today, Netflix has grown its weekly net revenue from under $50,000 to nearly $2.9 million, its report says.

The app has come close to snagging the No. 1 spot on the Top Grossing chart before, Sensor Tower notes. The closest it got was on November 14th, 2016, when it ended the day at the No. 2 position. For what it’s worth, rival app intelligence firm App Annie didn’t record that brief fling with No. 2, and only credits Netflix with having achieved the No. 3 Top Grossing spot in the U.S. on November 8th, 2016.

The discrepancies come down to how the firms measure and record app data, but regardless, neither had recorded the app as ever having earned the No. 1 one spot in the U.S. 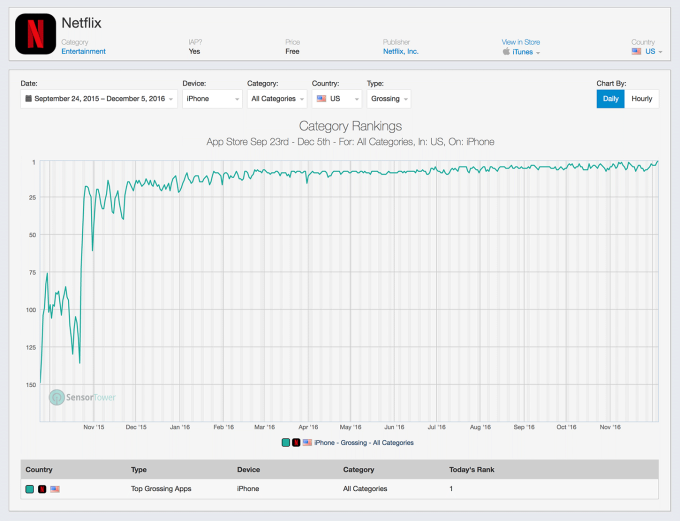 The milestone is significant for Netflix, as it indicates the company’s success at continuing to grow its U.S. subscriber base, despite earlier concerns that the U.S. market was nearing saturation. As indicated by Netflix’s Q3 earnings, the company appears to be shaking off its weak U.S. subscriber growth — something that’s been attributed to the appeal of its growing library of original content.

In addition to revivals that tap into viewer nostalgia, like “Fuller House” and “Gilmore Girls” — the No. 1 and No. 3 most popular original shows, according to a research firm — Netflix has original series that appeal to a variety of viewers. 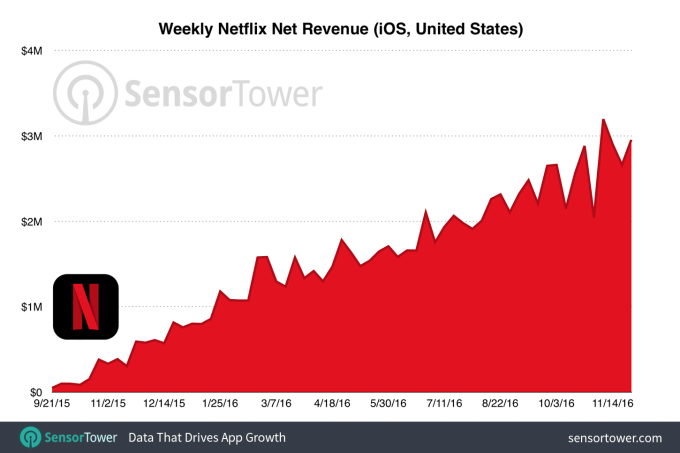 The advantage of being a streaming service is that Netflix’s shows don’t have to each receive blockbuster ratings on their own, as compared with what’s required in network television to keep a series on the air. Instead, they have the power to reach niche audiences, that, when combined, can boost the company’s bottom line.

Netflix aims to continue to bolster its library with more originals that will bring in new subscribers — more than doubling the number of hours of original programming in 2017 compared with this year. The company today announced its plans to delve into unscripted series as well, with around 20 more shows in this category launching next year.

While today represents the first time Netflix has scored the top grossing position in the U.S., the iPhone app has already earned this honor in other markets. It’s also now the No. 1 grossing app on iPhone in India, Mexico and Columbia.