Before the streaming era, if you found yourself watching a movie or TV show with a great soundtrack, you may have gone out later to buy the CD. These days, at best, you may remember to look up the soundtrack on iTunes or a streaming service like Spotify. But the premium TV network Starz has a different idea: in partnership with Spotify, it’s putting soundtracks directly into its video streaming app.

This collaboration is the first time a top streaming video service has integrated with Spotify like this to connect viewers with the music behind their favorite shows and movies. However, it’s not the first time that music and video content have been combined – after all, Spotify’s own app features a variety of video programs, including its own originals. And YouTube, which is both its own streaming service and source for music, has dabbled in this space for years.

The move is meant to make Starz’ app more engaging, in the now highly competitive market for video streaming services. Starz benefits by being able to promote its shows through the new feature, but what’s more interesting about the deal is that Starz will actually use Spotify users’ listening habits to customize Starz video recommendations.

The precision of the science behind these music-powered recommendations remains to be seen, but it’s not something that’s really been tried before in the other major streaming services.

According to Starz, anyone using its app can listen to 30-second track previews, but Spotify Premium subscribers will be able to authenticate with their account and then listen to the full songs and playlists. You can also save the songs you like and follow playlists from the Starz app, which then makes the music available to you in your Spotify app. 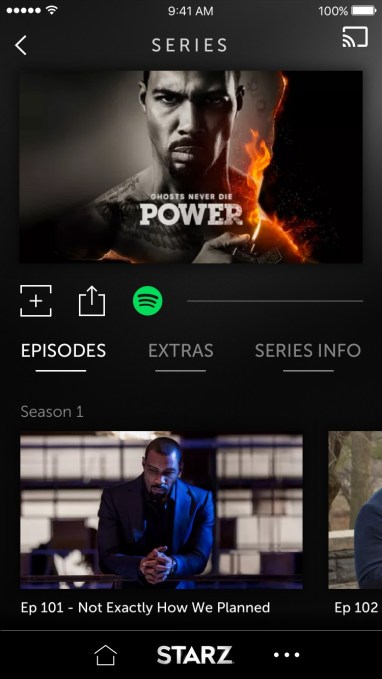 The company plans to use Spotify to highlight its original series in particular, but says that music will be available for other premium movie and television content, too. Some of Starz’ more popular shows including “Power,” “Outlander,” and “Black Sails,” and it will soon be home to the anticipated “American Gods.”

However, not all these original shows currently have a Spotify playlist available. Instead, the selection at launch includes “Flesh and Bone,” “Power,” “Outlander,” “Magic City,” “Ash vs Evil Dead,” “Da Vinci’s Demons,” “The White Queen,” and “Spartacus.”

Starz itself is not a free service, but it does offer sign-in options for both pay TV and cord cutters in a single app. The over-the-top version of Starz is $8.99/month, or you can authenticate with your cable or satellite provider.

For Spotify, app integrations – even unexpected ones – are not uncommon. The company’s music service has been made available within a number of mobile applications, including Uber, dating apps like Bumble and Tinder, Starbucks, Messenger, Alexa, and others.

Starz says Spotify has been integrated into all its handheld and tablet applications on iOS and Android.