Ola, Uber’s main rival in India, has launched a connected car entertainment platform for its vehicles to make its trips more luxurious.

Nobody wants to be stuck in a cab for a long and boring ride — and the rides can be long in India’s traffic clogged cities. ‘Ola Play’ takes the idea of in-trip entertainment, which we’ve previous seen through initiatives like Uber’s integration with Spotify and Pandora, to the next level.

It features two touch-sensitive consoles — one for driver and one for passenger — which include entertainment options, trip-based features, an internet browser and more. It also syncs with a passenger’s phone, to enable them to use services like Apple Music, Sony LIV, Audio Compass and Fynd from their own device on the screens.

In addition to participation and partnerships from companies like Apple, Ola worked with India-based automotive firm Mahindra and Mahindra and Qualcomm on the hardware.

We’ve seen Ola argue that its rides must include entertainment features before. Last year, it added free in-car WiFi to its cars — at the same time Uber did — with the argument that its passengers should be able to enjoy a quality experience and help battle India’s often patchy mobile network signals. It took that a step further this year when it announced an ambitious plan to turn those roaming Wi-Fi cars into municipal Wi-Fi networks that Ola customers can access.

Now, with Ola Play, it is once again putting the focus on experience. The service be available within its high-end Ola Prime cars in Bengaluru, Mumbai and Delhi for “select customers,” but the plan is to increase Ola Play so that it covers more than 50,000 vehicles across India by March 2017. 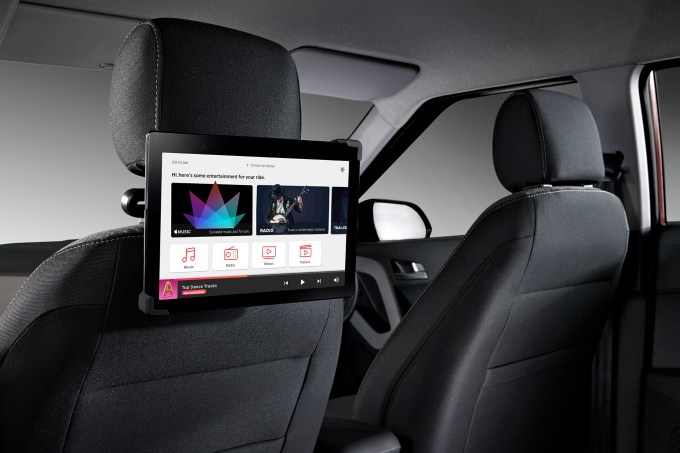 It will be interesting to see what features Ola plans for the in-car platform, since it is already working with some brands — including fashion e-commerce firm Myntra — on ‘Ola Select,’ its benefits program which include the Wi-Fi package. It wouldn’t be too difficult to provide in-car shopping, for example, from a particular company to the potential benefit of both passenger and service provider.

Ola is locked in an intense battle with Uber, with the U.S. company diverting increased resources into India following the (impending) sale of its business unit in China in Didi Chuxing. Ola covers more cities in India than Uber right now, and evidence suggests it is just ahead in major cities, but Uber is upping its focus with new features for India and expansion plans, so Ola is forging ahead with its entertainment push to sway more affluent users — the kind that might be acquainted with Uber — to its service.

“I believe this will completely transform the consumer’s ride experience, giving the user the power to control the interactions within the car, and usher in a new era in the ride-sharing industry,” Ola co-founder and CEO Bhavish Aggarwal said in a statement.

“With over 60 million minutes spent in Ola rides every day, the impact on consumer comfort, convenience and productivity can be transformative. This will further propel ride-sharing as the first choice of mobility for many more millions,”Aggarwal added.

The launch also comes amid speculation that Ola is close to raising new funding. The company raised $500 million one year ago and, with Southeast Asia-based ally Grab raising a blockbuster $750 million despite operating in a smaller market, Ola will be hoping for a windfall, too. Earlier this month, Bloomberg reported that Ola is close to raising $600 million — no doubt one of the objectives of today’s splashy and glamorous announcement is to help any ongoing investment talks progress.