The Ken plays the starring role in the traditional Japanese Kendama game. It’s a cup-and-ball juggling toy that hasn’t seen much disruption since the 17th century. Until now, that is. Dendama is an Internet of Things-oriented company that’s working on bringing the Kendama toy into the current century.

The toy has seen an increase of popularity both in Japan and internationally over the past 15 years, with an increasing number of national and international competitions. Check out the 2016 World Cup-winning routine, for example. Yowzers!

“We have added sensors on all the contact surfaces of the old game,” Yoshihiro Ohtani, CEO of the Japanese startup tells me at the TechCrunch Tokyo conference. In addition to cup and spike sensors, the toy has accelerometers built-in to determine which tricks players are succeeding at.

The Dendama connects wirelessly to a smartphone, which can help the user train for new tricks. The app also adds a layer of multiplayer gaming possibilities to the age-old games. Recognized tricks are given a difficulty score, which cause “damage” to your opponents. 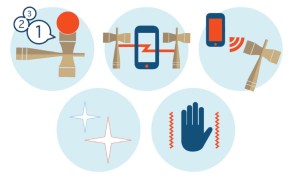 I hope this graphic from the company’s website helps clear things up.

The company raised around $11,300 from Japanese crowdfunding site Makuake. Ohtani tells me that Dendama is planning another round of crowdfunding on Kickstarter in March of 2017 in order to raise funds for production and to test the international appetite for the product.

To see what a digitally enhanced version of a hundreds-of-years-old game looks like, check out the video below.