The BBC, the UK’s national media organization, is expanding its international presence as part of an ambitious goal to reach an audience of 500 million people by 2022.

The initiative will see the BBC World Service expanded into 11 new languages — Afaan Oromo, Amharic, Gujarati, Igbo, Korean, Marathi, Pidgin, Punjabi, Telugu, Tigrinya, and Yoruba — to take it to a total of 40. The long-term plan is to create video content for all of these languages.

Beyond localizing existing content for new audiences, the World Service will also create bespoke news, radio and video programming for a number of regions, including Russia and surrounding areas in Eastern Europe, Africa, the Middle East, and Korea. A good example of this kind of expansion is Japan, where the BBC made a localized push last year.

The BBC is also investing digital mediums for its news and bulletins, such as localized websites, an increased social media presence and new TV programs for partner broadcasters. The organization is pledging to hire more journalists on the ground in some regions with the aim of creating original content, increasing analysis and its reporting to “help audiences to make sense of the world by explaining the ‘why’ as well as the ‘what’.” 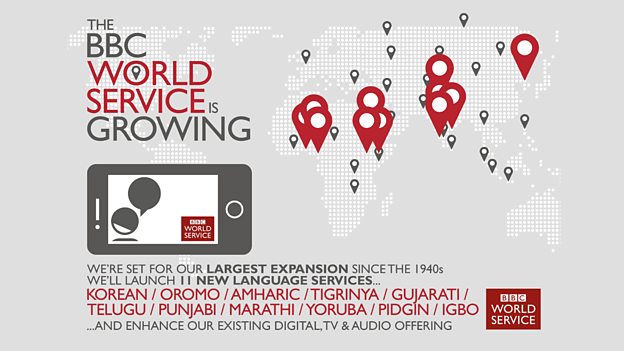 “Today’s announcement is about transforming the World Service by investing for the future. We must follow our audience, who consume the news in changing ways; an increasing number of people are watching the World Service on TV, and many services are now digital-only. We will be able to speed up our digital transformation, especially for younger audiences, and we will continue to invest in video news bulletins,” Francesca Unsworth, BBC World Service Director, said in a statement.

This expansion, which the BBC said is its largest since the 1940s, is being funded by a financial boost from the government that was secured last year. The UK government committed to provide £34 million ($42 million) between 2016-17 and £85 million ($106 million) per year from 2017-18 to expand the scope of the World Service’s digital, TV and radio footprint. That funding allocation is due to be reviewed in 2020.

The BBC currently claims to reach close to 350 million people worldwide, but the goal is to reach that aforementioned audience of half a billion by 2022, the year that marks its 100-year anniversary.