And I honestly don’t think these things should be reviewed at all — especially as a gadget. More of a hybrid marketing/consumer research experiment than an actual product launch, Snap, née Snapchat, Spectacles are one of the coolest, most fun bits of hardware I’ve used lately and I just scored an NES Classic.

But they’re not a full rollout of a hardware product. Reviewing these would be tantamount to reviewing one of those pop out pairs of 3D glasses that come inside a Blu-Ray case for some tentpole flick. Not that the hardware isn’t interesting or well designed in its own way, but they’re being dropped out by dribs and drabs in the few thousands of pairs and are a limited edition product. This product and the marketing effort around it will establish Snap as a company that exists outside of Snapchat, its software product — and it will tell Snap how people use them and what for, exactly. 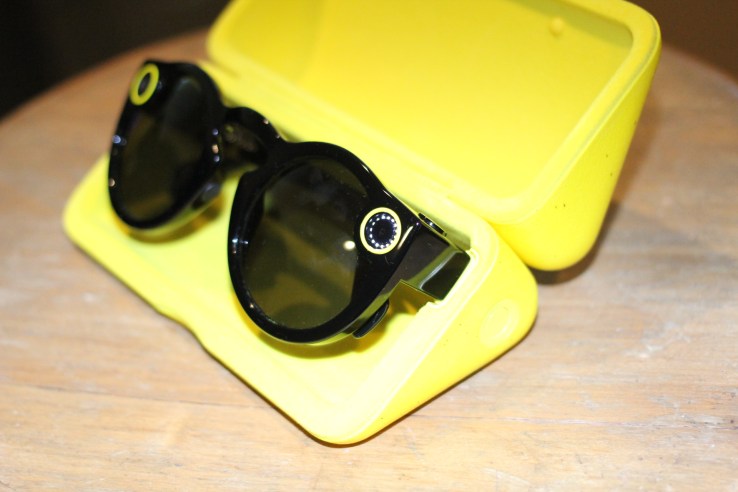 But they’re still worth examining, for the same reasons I mentioned above.

As an establishing force, the Spectacles are a solid win. There was huge hype over their release in a vending machine designed to look like a character out of Snap’s ‘universe’ — a cartoony eyeball sporting Minion box with a clever Augmented Reality try-on screen and whimsical details like a rainbow printed receipt with a binary code message at the bottom. You can read more about the experience of using the machine here. Early impressions, including this one, are good.

With huge lines in its first location (it’s coming to more places soon) in Venice Beach, CA near Snap HQ, the buzz was instant and fierce. Pairs of Snap glasses are going for thousands on eBay because the demand far outstrips the supply. Already, this limited rollout pays dividends as it avoids pairs sitting on shelves somewhere and creates a marketing event around even their appearance. Snap avoided sending the glasses to gadget or tech sites for review, which I’ve already said I think is a great idea. That’s not where these things will be sold — that will be accomplished via the hype and their output, which exists only on Snapchat in the form of clever circular video.

It’s a product that produces content only for its exact intended purchasing audience. This is an incredibly difficult feat to pull off. Even Apple, with its incredible history of great iPhone cameras has to appeal to a wide audience of potential buyers that may be using photos or videos on dozens of different platforms.

Snap has inverted the hardware funnel here in a way that I haven’t seen since the Flip camera (RIP, dead before your time). 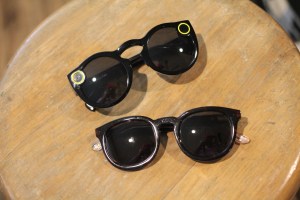 The glasses themselves are a Ray-Ban analogue but with some design twists that remind me more of my favorite pair from Ksubi, the Bonde. Size wise they are closer to a 54mm Wayfarer – big on the face but not out of trend. The two yellow circles for camera and LED ‘recording’ light balance out the front, making the camera a design element rather than letting it fall into the realm of ‘technical necessity’. The four circles of the two lenses and the two yellow circles give the glasses a radically distinct look that is recognizable from a distance — another hallmark of great marketing design.

The packaging and accessories are, more than anything, disarming. It’s the egg foam that cuts that heavy pour New York Sour.  The sweet cream that makes that acidy store bought cold brew palatable. A fun foamy case that charges the glasses to full four times and can sync snaps over to your phone with a button. A cleaning cloth cut into the shape of the Snap ghost. A multicolored USB cable wrapped in bright yellow packaging. 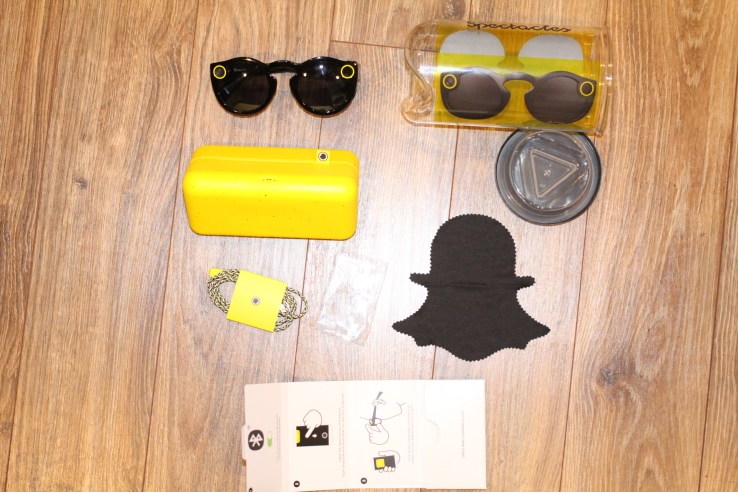 All of it tucked into a plastic canister that feels like it could hold tennis balls or an inflatable coozie. The whole thing evokes sun, croakies, beaches, sunblock, activewear and fun. It’s not a vibe that is going to work for everyone, some will probably feel put off by the casualness of it all. But not Snap’s core demo. And more than anything it will get attention and is completely recognizable as a Snap product.

The glasses even pair in a logical way for a Snap product. You just flip them open and snap a picture of your Snap code on the screen of your phone. This is both easy and logically aligned with Snap’s ‘universe’.

To record, you tap once for 10 seconds and twice more to extend the recording up to 30 seconds. A rotating LED on the front very clearly indicates recording — which should help reduce the creep factor just as much as the highly recognizable yellow rings and manual gesture to start recording.

The experience isn’t without its glitches. The glasses did drop Bluetooth connection at very short ranges and the transfer of snaps is too slow. Even the WiFi mode, manually enabled, for transferring ‘HD’ snaps is not all that zippy. But overall, it works as advertised.

The image quality is snap quality.

More than anything else here, though, the circular video is a revelation. When shot with Spectacles and displayed in your camera roll, it’s a circular disc. When viewed in Snapchat, the video fills the screen and as you rotate your device you get a smooth transition from vertical to horizontal, allowing you to see more of the image than if you’d just done one or the other. I only tried this on iPhone though it is available on Android as well.

There is a sort of rethinking here of what video is and is used for. The choice between vertical and horizontal stills became a moot point when video became common, then flared up again when mobile phones rolled around. With their default vertical orientation the holy war between vertical video and horizontal video shooters was born. I’ve never been particularly religious about it but almost always preferred horizontal because the intended viewing point of those videos was either a TV or a computer. Snapchat, of course, changes that because all of its video is intended to be viewed vertically.

Allowing the viewer to choose what they see and when they want to see it is a great little hack that side steps the entire debate and feels mobile native at first go. It also lends itself to repeat viewings, because there may be something you missed there.

Here is an illustration of the Snap mechanic pic.twitter.com/FFcWQCIiTH

There is also the matter of hands.

When Snapchat released its marketing video I remarked on how many hands were in the frame in all of the shots they chose to use. And in use I’ve come to value the way that they free up my hands from fumbling with a phone or placing that phone in between me and my kids or dogs. I had similar experiences with Google Glass, RIP as well. Having your hands free to manipulate or hold or touch or help while you’re taking a snap is so great. It also greatly increases the sense of ‘place’ that you get out of it. I spent some time yesterday talking about how point-of-view photography is going to change the space, I’ll just quote that here:

There is another whole discussion in how POV, which encourages eye contact (something that you get with Spectacles) is an enormous break in narrative technique from centuries of film and photography. Traditionally, eye contact with the camera was considered something to be avoided as it breaks immersion. With POV cameras, however, you’re placed into the narrative and have to come to grips with the fact that you’re a character.

And hands are going to increase that sense of immersion and place ten fold, just as they do once you include them in a VR experience.

As with Vine and other hyper-specific formats, I expect art to come out of this as people figure out how to use the whole ‘circle’ to provide unique viewing experiences. If you put text ‘off the screen’ to the right, for instance, it will show up only if you rotate the phone. Keep an eye out for Circlorama-style adaption to format among Snapchat creators here.

So to sum up, the Spectacles are an amazing packaging and marketing exercise. This is not a ‘gadget launch’ as we’ve come to expect it, but it is one that is completely aligned with the company’s audience and efforts to become something more. And the circular video is a true blue technical innovation that came out of left field yet feels perfectly obvious — which is exactly how all of the best ideas feel.

This is a toe dipped in the waters of hardware for Snap, but so far the water is warm.