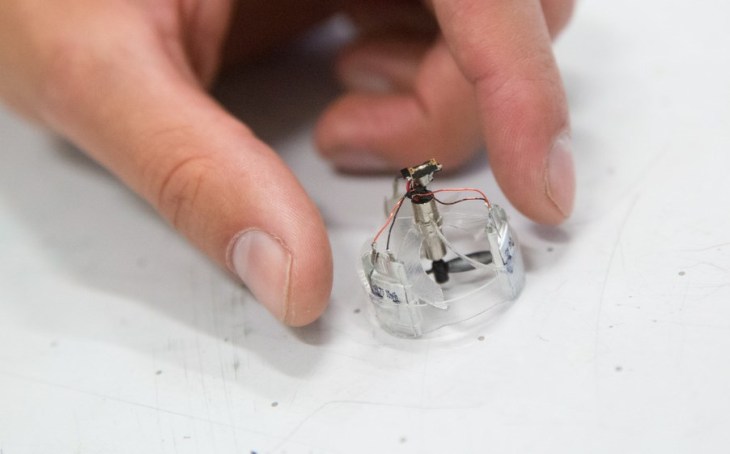 Big robots like Spot may be great for carrying things or trotting out onto stages, but just as much sophisticated engineering goes into creating tiny ones as well — and this little flyer from the University of Pennsylvania is one the tiniest yet. 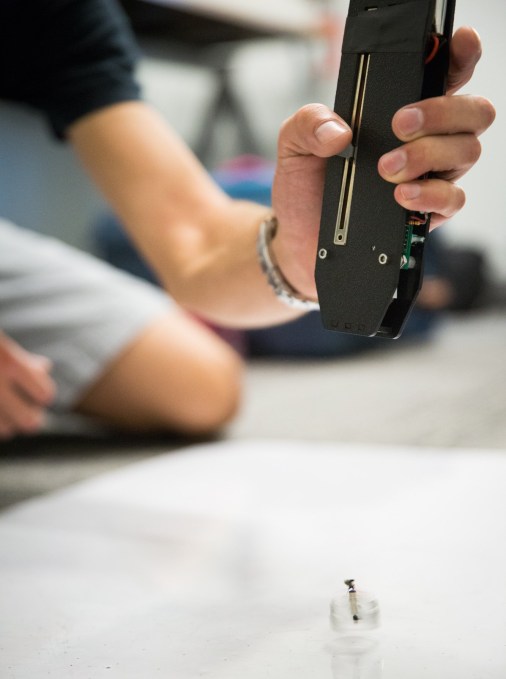 About the width of a quarter, Piccolissimo has just two moving parts, which is one more than the ballbot we saw earlier this month. One is the propeller, the other is the 3D printed body: both spin, but at different speeds. The propeller is slightly off-center, and the body turns 40 times per second, evening out the thrust to vertical — but tiny modifications to that spin speed can send it in one direction or another. It’s all controlled with a simple signal sent over an infrared beam.

For now it just hovers, but functionality is easy to add.

“Spinning vehicles are pretty terrible for carrying people, but pretty fantastic for carrying sensors,” explained Piccoli in a Penn news release. “It’s common practice to make a simple sensor, then spin it around, like radar dishes at airports. We get this feature for free, so we could take a line-scan camera, like in a barcode reader, put it on the vehicle body, and get a 360-degree panorama.”

Easy to add, at least, assuming you can keep the addition under a gram — that’s the current payload limit on this diminutive platform.

The reasons for creating ultra-small, ultra-simple devices are many. Simple often means efficient and cheap, even disposable — which is good not just for consumer applications but everywhere. It’s a big decision to send a million-dollar humanoid robot to investigate, say, a radiation leak or damaged building. Not only is it expensive if it fails, but the complexity of the robot means it could be just as susceptible as a human to things like radiation, dust, and other obstacles.

On the other hand, a swarm of a hundred Piccolissimos coordinating as a group, equipped with cameras, radiation sensors, and accelerometers (one each) could reconnoiter an area quickly and cheaply, and if they don’t survive, well, you can print another hundred.

Big robots like Spot may be great for carrying things or trotting out onto stages, but just as much sophisticated engineering goes into creating tiny ones as well — and this little flyer from the U...