LG shipped 13.5M smartphones overall in the quarter, with some uplift in North America where it reported a 14 per cent increase in sales from Q2.

It says its priorities for the final quarter of the year will include increasing sales of its LG V20 smartphone, as well as putting some wood behind its “mass-tier” K and X series devices.

It also intends to finalize business structural improvements in the mobile division to — in its words — “be better prepared for the challenges ahead”.

LG announced a restructuring of its mobile division this summer, after disappointing sales of its modular G5 handset.

Unveiled with much fanfare at the Mobile World Congress tradeshow in February, the G5 smartphone with the swappable chin nonetheless roundly failed to excite consumers. The LG V20 is a more ‘back to basics’ device, with no modular elements — just a big screen, dual rear cameras and what we dubbed “an unremarkable design”.

While smartphone sales growth has generally been experiencing a slowdown globally, the Android OEM space continues to be especially competitive, with a raft of Chinese device makers battling to take share from more established rivals — making life difficult for the LGs of the phone making world.

Three of the top five smartphone device makers are from China, according to analyst Strategy Analytics’ Q3 smartphone market report — 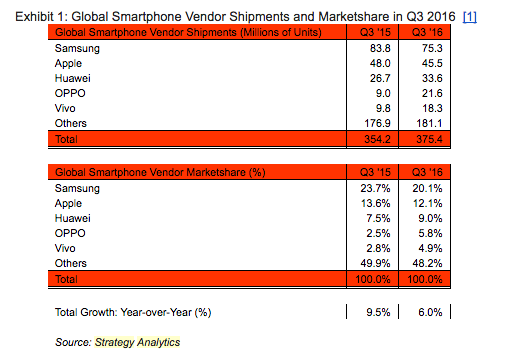 Third placed Huawei, one of the Chinese brands, saw its growth more than halved in the quarter as a number of domestic challenger OEMs eroded its home advantage.

“Huawei is facing intense competition from OPPO, Vivo and other emerging Chinese rivals such as fast-growing LeEco,” notes the analyst.

Rising Chinese device makers are also contributing to some uplift in global smartphone shipments, which grew 6 per cent annually in Q3, from 354.2M units in Q3 2015 to 375.4M in Q3 2016, which Strategy Analytics says is smartphone industry’s fastest growth rate for a year. Although there’s no comfort for LG there, given its tough quarter is set against a backdrop of rising boats elsewhere.

Strategy Analytics says its expecting an improved smartphone growth outlook for the second half of this year, due to several big new product launches — “from Apple, Huawei and others”.