No mainstream electronics manufacture is making more interesting, innovative and downright bizarre products than Lenovo. Between its contorting efforts under the Yoga banner and the modular handsets being produced by Motorola, the Chinese company is taking the sort of form factor risks we rarely see outside of hardware startups.

Nowhere is this better embodied than in the $499 Yoga Book. If nothing else, it’s impressive that the company has managed to produce yet another fascinating take on the well-trod world of the hybrid. This time out, the company leans heavily on the notion that handwriting is one of the great unsung casualties of the rise of the tablet.

In fact, the system is built around the return of pad and paper, incorporating the analog-to-digital output of devices like kind offered by Wacom’s budget Bamboo line into a high-end, $500 device. When we spoke to the company ahead of its launch, they saw it as primarily as a play for college students – a combination note taking device and standalone computer all in one.

It’s a bit of a gamble, as these sorts of radical form factor departures always are. But if nothing else, it’s an utterly fascinating piece of hardware from an industry that too often defaults to more of the same. 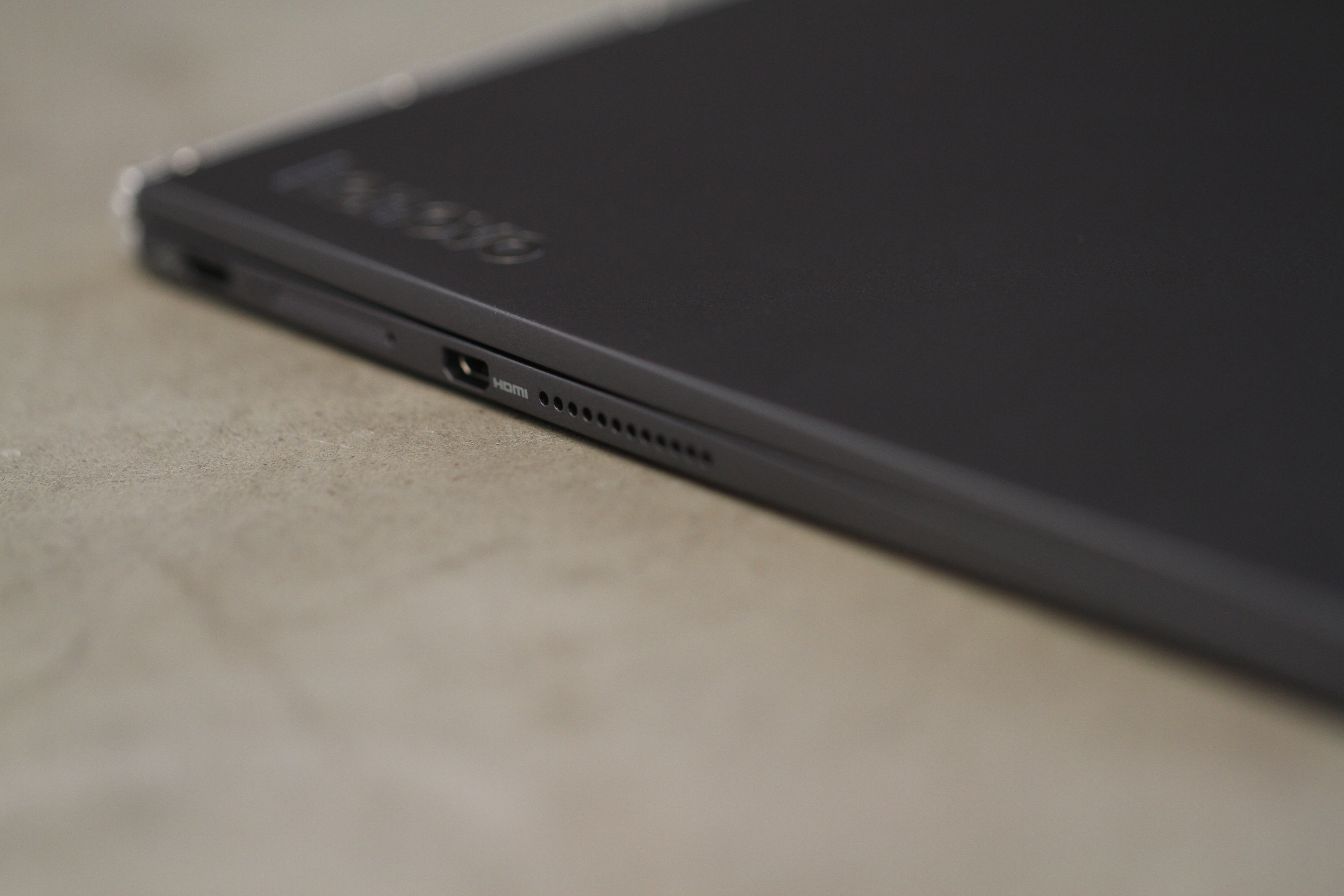 The Yoga Book is thin as hell. It’s 9.6 millimeters thin. That’s 0.38 inches, compared to the Macbook’s 0.52 and 1.5 pounds to the Apple laptop’s 2.03. It’s perhaps a somewhat unfair comparison, given the difference in screen sizes, but it does drive home how remarkably compact the device is. And indeed, it really does feel like a marvel of engineering – it’s thin and light enough to slip into a backpack with little notice, while maintaining the sturdiness of a full laptop.

The solidness of build quality is due in no small part to the hinge. It looks a bit gauche and out of place at first, like a metal watchband connecting the two panels. It’s perhaps not aesthetically consistent with the other understated pieces, but it manages to contort the system to nearly 360-degrees, never wobbling the whole time.

Closed, the system takes on the appearance of a scaled down ThinkPad – albeit one largely devoid of ports. All you get is a single micro-USB (not USB C, mind) for both charging and plugging in accessories and micro HDMI – more inline with its tablet roots than laptop aspirations. Sandwiched between the two is a micro SD slot. On the other side are the device’s sole physical buttons: power and volume, along with, yes, a headphone jack.

Inside the book are two completely flat panels. Up top is a fairly standard squared touchscreen display surrounded by a thick black bezel, with a two-megapixel camera up top and a silver “Lenovo Yoga Book” logo in the bottom right corner. The bottom panel, however, is where things get really interesting. 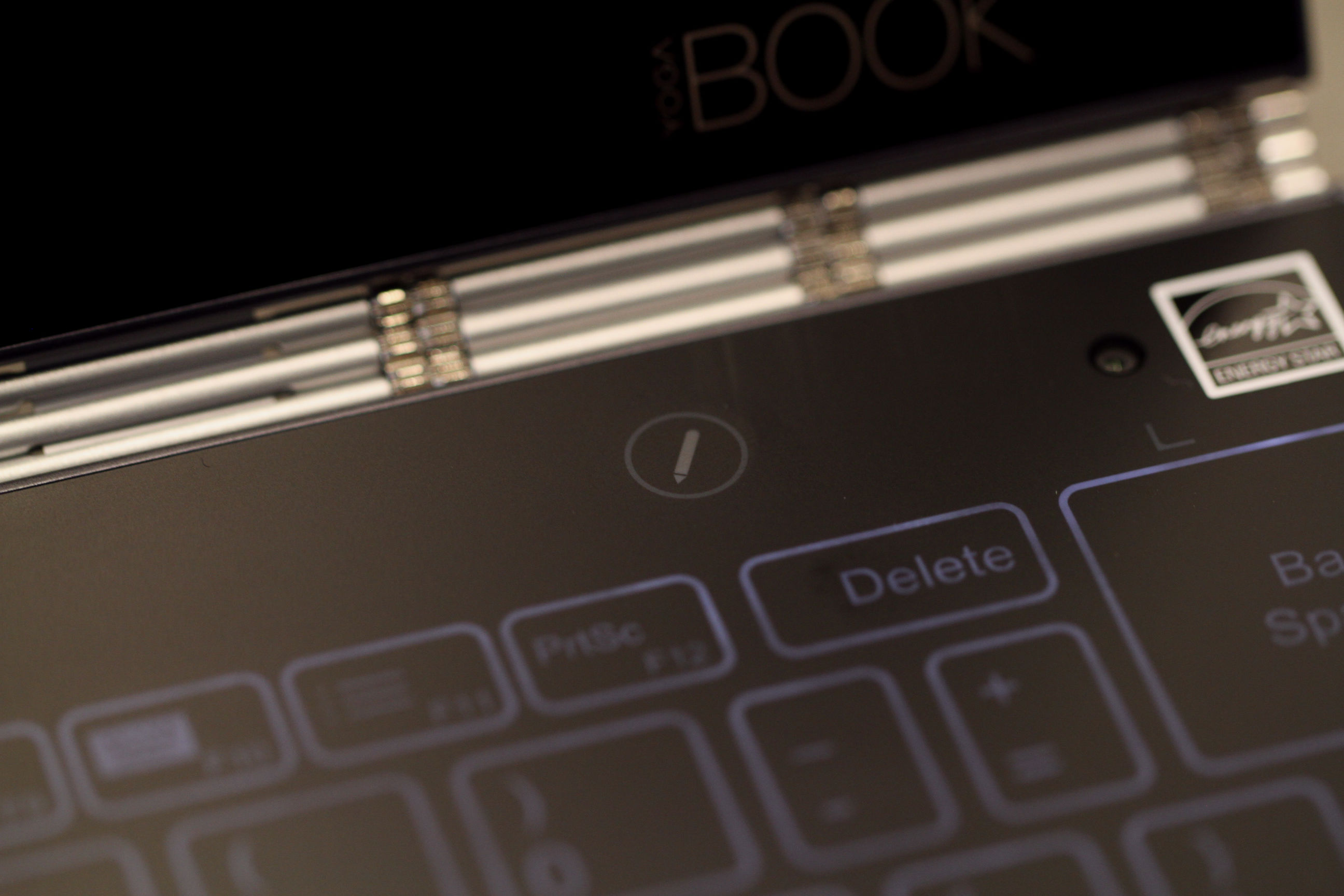 It’s also where Lenovo tries to be everything to everyone. Powered off, the bottom panel is entirely black, with the ghostly suggestion of a keyboard. Once on, the keys illuminate. It’s a nice effect – the Halo keyboard. It looks good, and it certainly goes a way toward shedding a few fractions of an inch from the Yoga Book’s profile.

But the drawback is equally apparent. You’re typing on a flat surface, and all of the haptic feedback in the world won’t change that. Granted, I’ve only been using the Yoga Book for a limited period, but I really don’t think the experience is for me. A little give is important to the typing experience, and that much haptic buzzing is more of an annoyance.

Again, Lenovo’s banking on younger users for this device – including high school and college kids – whose formative typing experiences largely occurred on touchscreen phones and tablets. The Android experience also has the added bonus of offering up predictive text as you type, akin to a mobile device, which some users may find to be a plus. Experience will also come down to precisely how much typing you plan to do on the thing. After all, that bottom black surface houses another key feature. 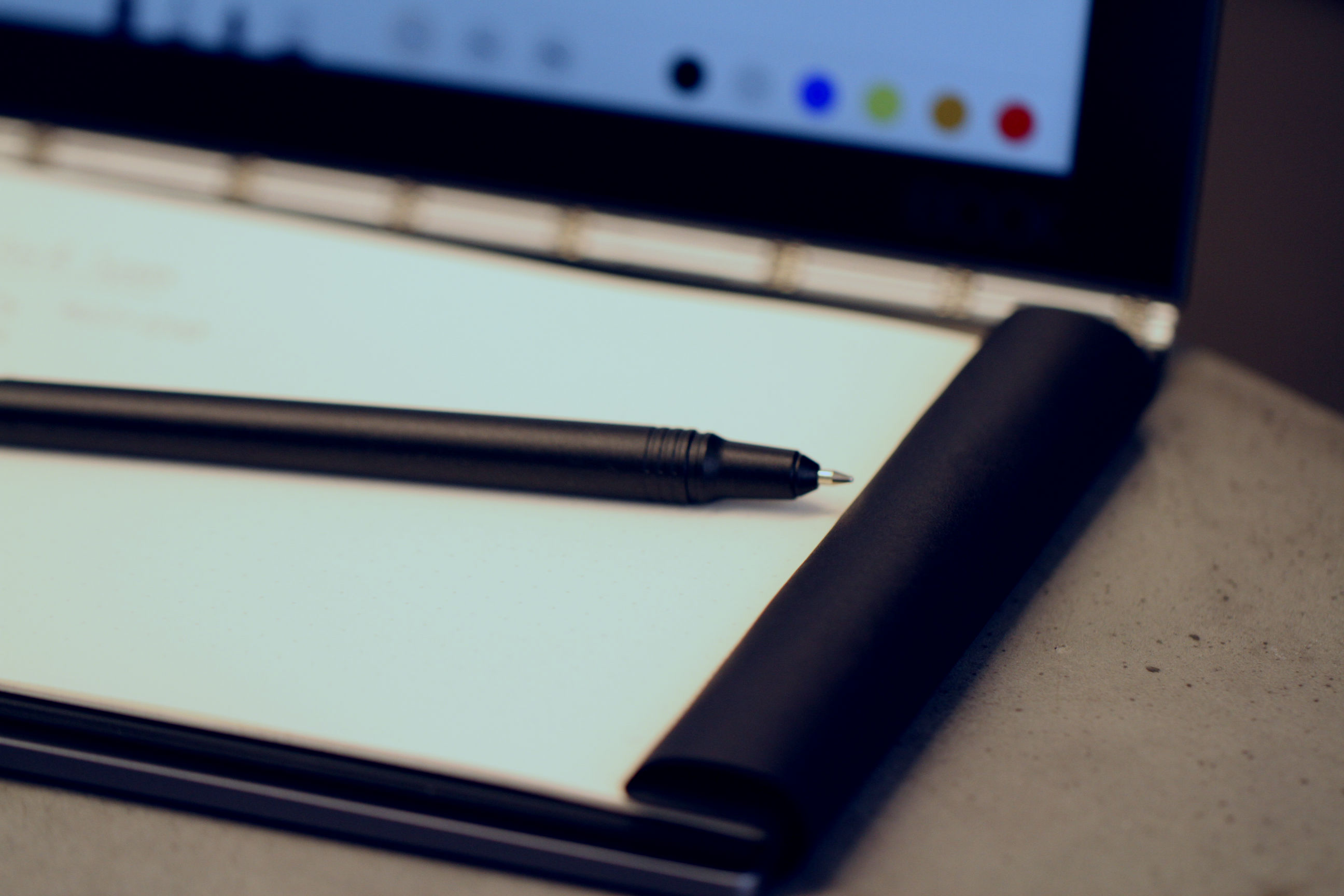 Hold down on the little pen icon above the keyboard and you’ll fell a haptic buzz before the surface goes black. The included stylus is the size of a standard pen and features a variety of different tips, both standard plastic stylus and a ballpoint ink variety, so users can write directly on the surface or magnetically snap a pad of paper on top and write the old-fashioned way.

Either way, the surface serves as a display surrogate, with text appearing on-screen in real time, as you write. Using the Note Saver app, you can switch between a trio of thickness options, ballpoint/fountain/pencil, and six colors. It’s fairly simple with an MS Paint-like interface, but it does the trick for note taking. 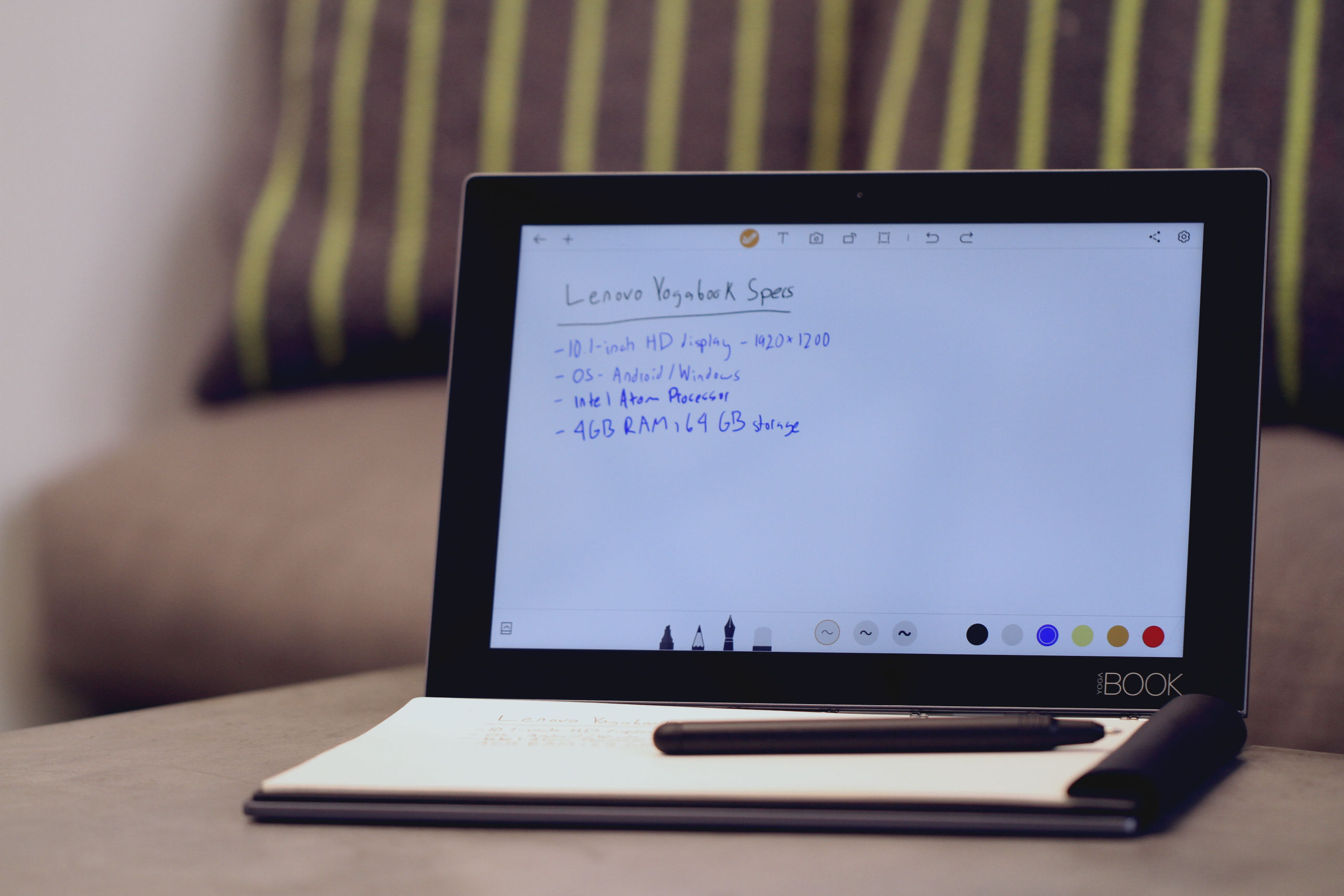 Unfortunately absent from the app is OCR – which converts handwriting to text. The Lenovo rep I spoke to said the company just didn’t believe the technology was accurate enough to employ this time around – a pretty big downside for those of us with abysmal handwriting that’s only gotten worse as we’ve moved more and more to the keyboard.

At the very least, it’s a less roundabout way to incorporate the sorts of analog to digital note taking capabilities from companies like Wacom and Livescribe directly into a device. For the moment, however, the demand for such functionality still feels about as slim as the device itself 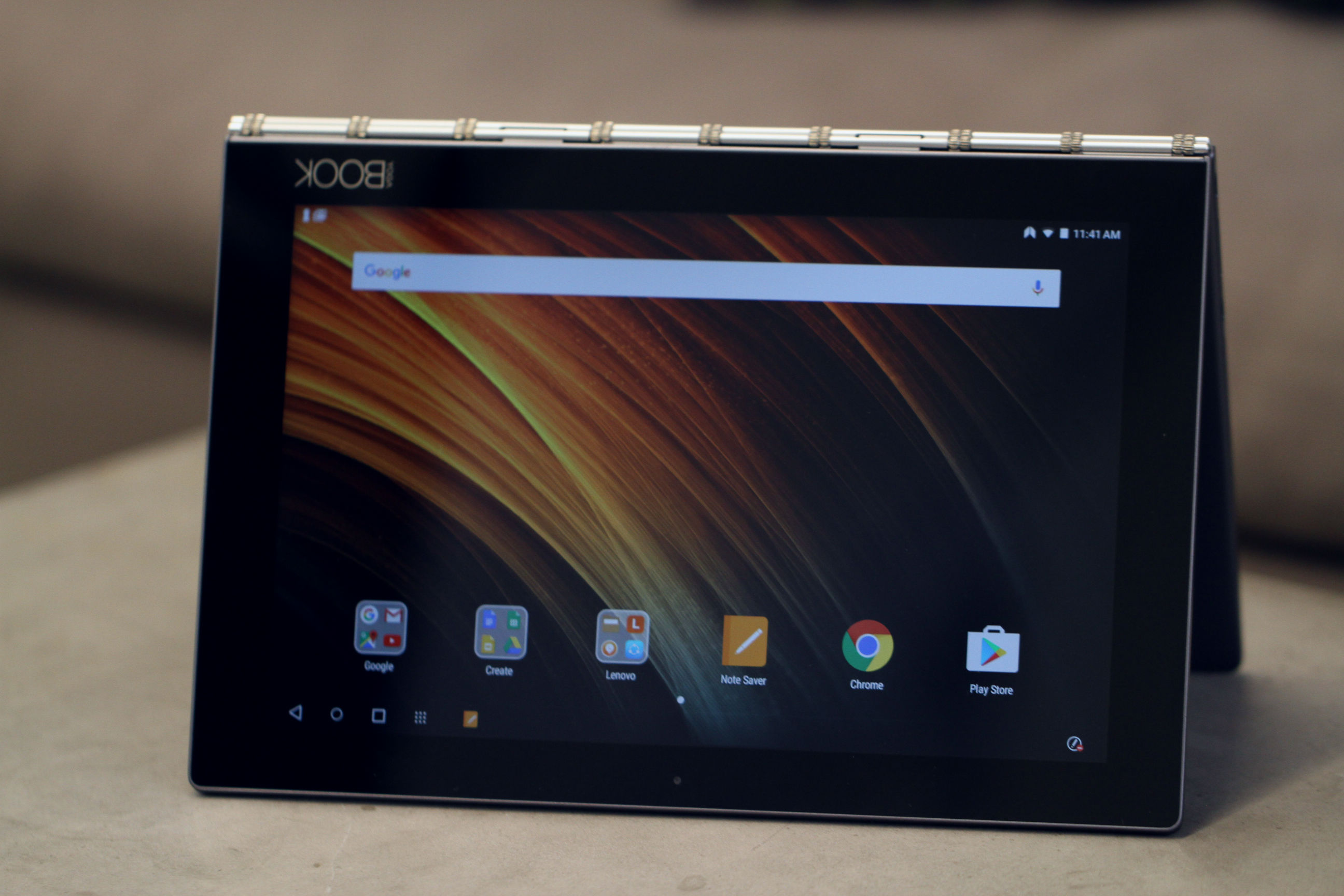 The unit we received runs Android (a fairly old 6.0.1 – with Nougat arriving somewhere down the road). Another $50 will get you the Windows 10 version – probably a worthy upgrade for anyone seriously looking to integrate the Lenovo Book into their daily computing life. If you opt for the Android version, be forewarned that it comes with all of the limitations of that platform.

Both version of the device run on an Intel Atom processor, coupled with 4GB of RAM. It’s enough to get most day-to-day functions accomplished, but don’t look toward the device to do any heavy lifting. The Yoga Book is better suited for in-class/office devices, rather than a full-bodied laptop replacement. The battery, meanwhile, is a hefty 8500 mAh, which ought to get you through a full day’s use, no problem.

A bit of a stretch 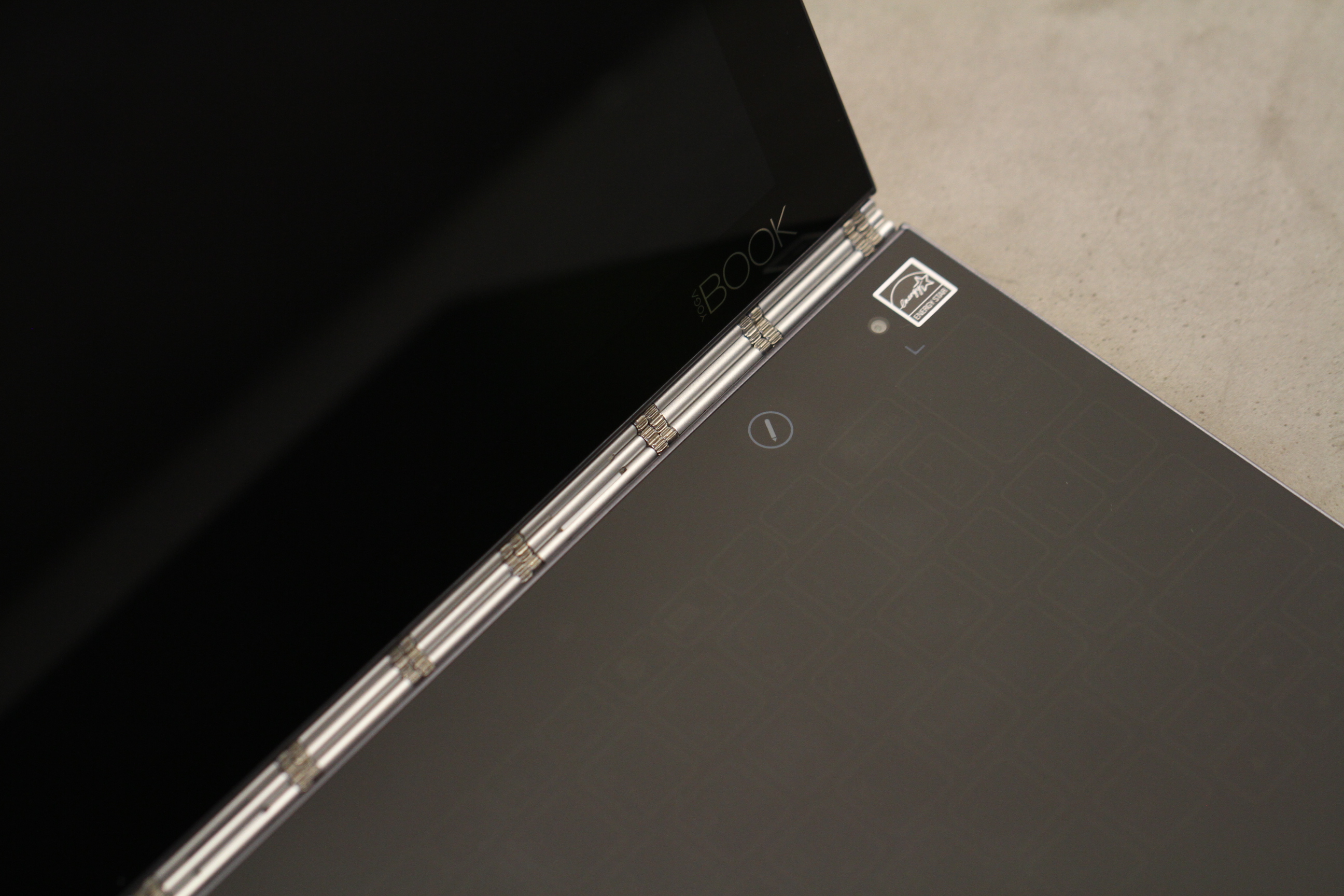 The Yoga Book isn’t for everyone. But then, Lenovo’s approach has never been one-size-fits-all. It’s a well designed piece of hardware (though you’ll want to find a spot for your notepad and stylus, so there’s no room on the device itself), that seemed likely doomed for a fairly narrow user-base.

Students and others who have long searched for a well-made tablet with integrated pen and paper note taking capabilities may just have found their dream device. For most of us, however, it’s a tablet oddity. It’s fascinating and a bold attempt to bring yet another take to the hybrid space, but as it stands, it’s not ready to set the tablet world ablaze.