Ever wonder which of your selfies is best? Tinder wants to help you figure it out, with the launch of a new feature called Smart Photos. And Smart Photos, in turn, show us just how much Tinder is a big data company, meticulously collecting information about what (and who) you like and don’t like.

Smart Photos is a single toggle in the Profile section of the app. When toggled on, Tinder continuously tests your various profile photos to determine which one is most popular, and automatically serves up that photo first in your ‘deck.’

Not only does the Smart Photos algorithm take into account overall popularity of your photos, but it also accounts for the swiping patterns of people looking at your profile.

The pic of you and the pup gets more overall right swipes than any other picture, and is served up as the first picture (or, calling card) of your profile most of the time. But, if your profile is about to be served up to someone who typically swipes left on dogs, Tinder re-orders your photos to show the selfie or sky-diving first to that particular person. 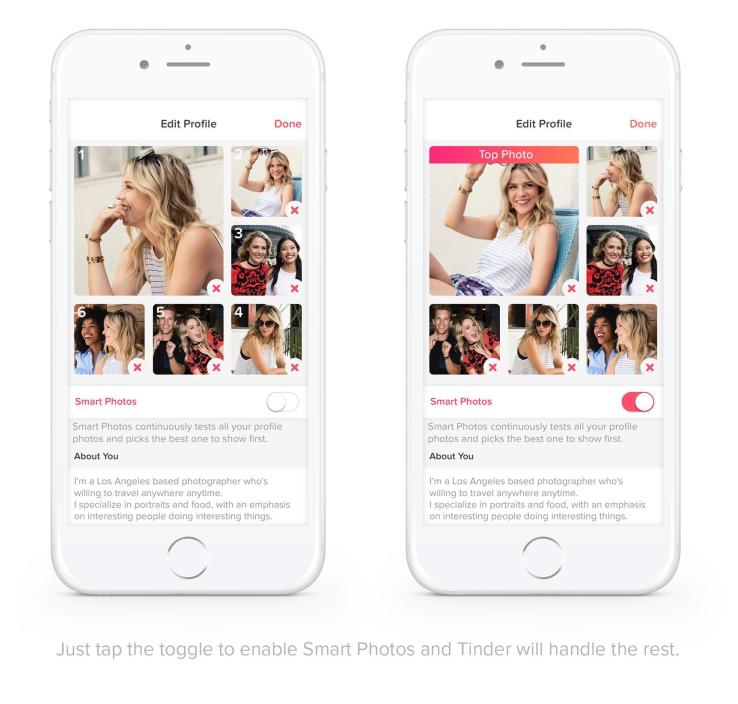 This is where things get really interesting.

Tinder has long been quiet about what kind of information it takes into account about its users. There is the obvious stuff, like gender, age, location, bio information, and if you hook up your Instagram then that’s even more data. But Tinder has never outright said that paying attention to what each individual user is swiping right and left on within an image.

In fact, the company has always said that the most ‘successful’ photos are the ones where you’re “being yourself.”

In testing, Tinder found that folks with Smart Photos toggled on saw up to 12 percent increase in matches. But the implications go well beyond more matches on Tinder.

In more ways than one, Tinder is a big data company. With millions of engaged users, Tinder is constantly trying to figure out how to serve you the most relevant matches in your area. And on that quest, the company is likely pulling in whatever data points it possibly can about you.

This type of information — that you hate pictures of dogs or that you tend to prefer buff, blonde guys — can be used in a variety of ways that go beyond matching you with other Tinder users.

For example, Tinder has an advertising product, where ads are served directly in the feed of folks who don’t pay to use the app (Tinder Plus). You could see how information about what you find attractive could be valuable to advertisers and other entities over time, especially as the world inches toward more targeted, personalized marketing.

It’ll likely be a long while before Tinder is actively using its troves of data — about who you like, and if you’re in the majority, and all your deal-breakers — to help marketers and advertisers better sell to you. But Smart Photos tells us a lot about what kind of data Tinder is collecting about its users.