A startup called Shine is rolling out a new service offering on-demand life coaching via text messages as a paid tier to its free, daily texting service. While a number of today’s chatbots and SMS-based concierge services have been focused on helping people shop via text message, Shine to date has instead focused on helping you become a better person. Through automated texts, Shine delivers daily self-help, encouragement, and advice to its subscribers, via either SMS or Facebook Messenger.

With the debut of Shinevisor, it’s preparing to introduce a more personal touch: advice and guidance from real people, who are certified life, career, and school coaches. 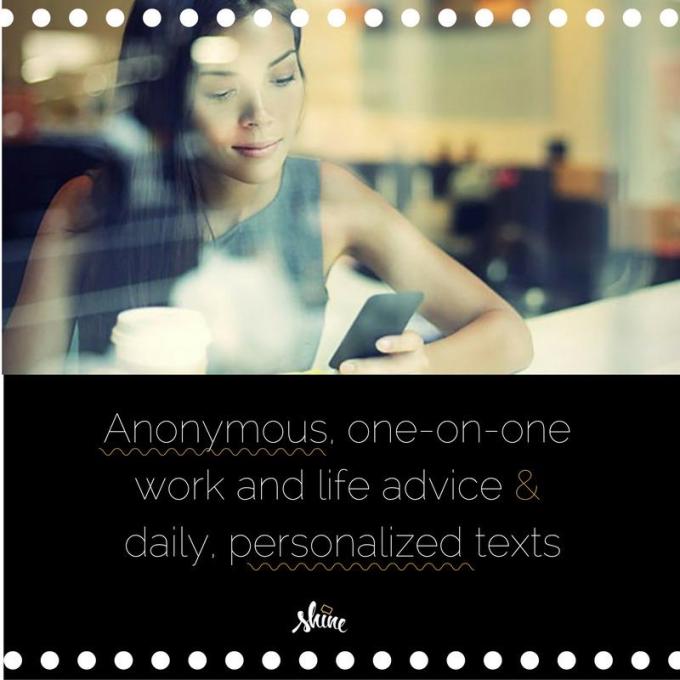 Launched into beta roughly a year ago, Shine’s free service is largely targeted toward a millennial audience. Every day, it sends out an automated text that tackles life’s struggles. For example, recent texts I’ve received from Shine have delved into subjects like facing criticism, trying to let go of the need to exert control over everything, overcoming procrastination, practicing patience, learning self-compassion, and so on.

Many of the texts are particularly tuned into issues you would face at work, and in particular those that women deal with in their careers. As co-founder Naomi Hirabayashi explained at last year’s launch, half of women report having experiences with self-doubt about their performance and careers, compared with 31% of men. Shine wants to address that.

Each Shine text starts of with an introduction to the day’s subject, which you can respond to by texting back “M” (for more). Shine then sends additional insight, including the why’s and how’s of the issue and hand, as well as further reading via web links.

As of this summer, the service had sent out over 2.8 million messages to a user base that’s almost entirely (88%) under the age of 35. Today, that number has grown to 10 million messages, to an audience that’s 70% women. 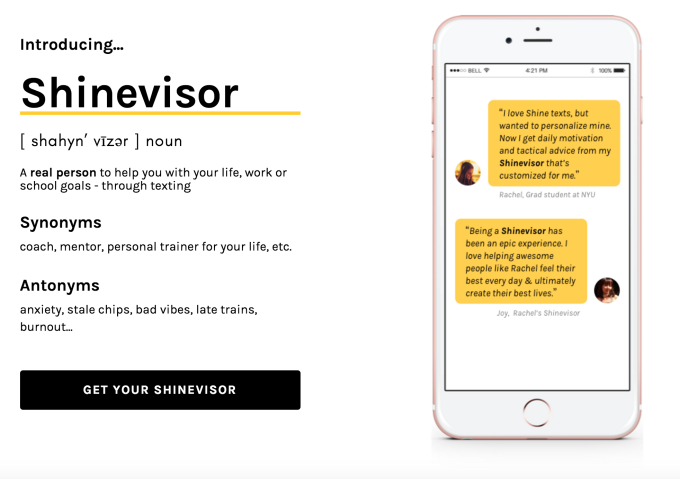 Now, Shine is experimenting with the next phase of its business: personal, one-on-one coaching. Through Shinevisor, users are connected with a certified coach they can text any time.

According to messages recently sent out to early Shine users, a number of members have been asking for the ability to talk to a real person for advice on work, school and life.

These advisors and coaches are first vetted by Shine before being connected to users. They have to have accreditation from a formal coaching program, many are referred through the Dreamers // Doers community for entrepreneurial women, and they receive virtual training to make sure their coaching is on-brand in terms of Shine’s voice, energy and personality.

The cost for this service is not cheap, however. Shinevisor is a fairly steep $15.99 per week (billed on a 12-week basis). That’s nearly as costly as the co-pay at a therapist (for those with health insurance), even though it isn’t like having an in-person session.

Instead, this real-world life coach will listen to your venting, your problems, and your life goals, via text, then write back with customized advice, feedback, and guidance. They’ll also send articles on the subject, so you can learn more about whatever it is you’re facing. Paid members are guaranteed at least one texting session per day, and the messages are sent asynchronously.

“We’re meeting people where they are in terms of the platform – which is on the go,” explains Hirabayashi. “So you can text your coach at any time, and they’ll get back to you when they’re able, and vice versa. So it’s a fluid conversation, versus the traditional coaching that’s a set session,” she says.

Traditional life coaching can clock in as high as $250-300 for an hour-long session, Hirabayashi adds, explaining how Shine aims to offer a lower cost competitor.

It should be interesting to see if Shine is actually able to convert its young users to this level of paid, on-demand coaching, however. After all, there’s so much free support available online – ranging from blogs and websites to email newsletters to private Facebook support groups and more.

Shinevisor, meanwhile, falls somewhere in between those looking for free advice, and those who are committed to seriously tackling problems through therapy or real-world mentorship.

The new service, still in beta, is currently being pitched via text to select Shine users, but is also available via the company website, where you can sign up for a free trial.