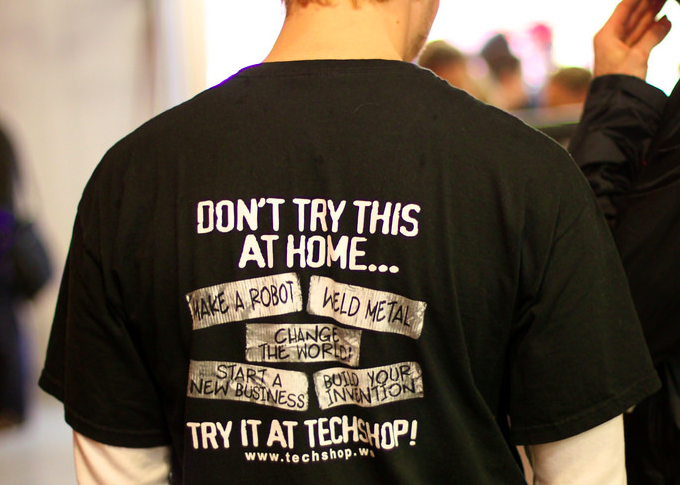 After years in the works, it’s finally happening: TechShop is opening up a Brooklyn location, TechCrunch has exclusively learned. It should be officially announced later today.

For those unfamiliar with the chain: TechShop is something of a do-it-yourselfer’s paradise. You pay them a monthly membership fee, and in return are granted access to any and all of their workspaces, each filled wall-to-wall with crazy equipment. Laser cutters! Welding stations! 3d printers! Plasma cutters! If it’s big and loud and maybe a little dangerous without the proper training, they’ve probably got at least one — and they’ll teach you to use it.

A membership at TechShop isn’t cheap. It’ll run you $100-$150 a month, depending on whether you buy in during a promotion. Then you need to get certified on each type of machine you want to use, which’ll run you about $60 a pop. All of that said, it’s a whole lot cheaper than buying (and, you know, maintaining) pretty much any of the equipment they’ve got; one of their laser cutters, for example, would set you back at least five grand. I’ve been a paying member for a few years now, and have tapped pretty much the full gamut of their gear for one project or another.

TechShop has been trying to get into Brooklyn for years. A post on their Google+ page mentions efforts going back as far as 2012. Alas, finding a suitable location — a place with room for all that hardware, member project storage, etc. — is tough.

Now, though, the City of New York itself is helping make it happen. Late last year Mayor Bill de Blasio announced an effort to bring manufacturing jobs back to New York City; part of this is “Futureworks NYC”, a collection of manufacturing services and spaces that call the NYC-owned Brooklyn Army Terminal home. As part of the deal, the city will help TechShop with things like discounted rent for its first five years.

A rep for the project tells me they expect the TechShop location to come in at around 20,000 square feet (15,000 for the main shop, plus another 5,000 square feet for member project storage), and that it should open by the end of Q2 2017. This will be TechShop’s tenth location, and its first in New York.