Figuring out public transportation can be a difficult experience — a lot of the data exists in disparate spots on the internet, and there are a lot of apps trying to jockey for a spot on your phone. Amid all that, there’s of course the opportunity to simply use Google Maps to find the right timing and pathway to get to your destination.

Then there’s Moovit, a public-transit-tracking app that has been trying to get a spot on phone owners’ home screens since it launched in 2011. The company says it has 45 million users, and with a new update to the way the app looks and feels today, it’s hoping it can not only hold onto those users but attract new ones — especially as it moves into new countries.

“One thing that I learned, end of the day if you’re not really solving a true problem and a big problem, there’s a big risk that users are simply gonna maybe download the app because the experience might be nice and maybe win some design awards, but it doesn’t stick because it doesn’t provide users an ongoing value,” VP of product Yovav Meydad said. “Public transportation is relevant for billions of people around the world, and the market size is enormous.”

The app has essentially been distilled down into three different parts of the experience that ended up on a new navigation bar at the bottom: planning a trip, looking up stations and tracking commute lines. Each of these more or less represent a specific mode in a user’s movement throughout the day using public transportation, Meydad said. The company has also added new features to correct existing information if it’s changed, as well as crowdsource new data, he said.

The design changes went all the way down to trying to simulate what users might see or feel on the street — whether that’s colors, specific designs or logos or things along those lines. Other apps like Transit try to do something similar, and the process is all about convincing users the app is basically an extension of the standard commute experience, Meydad said.

“For an app like ours, providing users a similar experience inside the app to what they see in reality, that’s what’s most important,” Meydad said.

A lot of applications will rely on publicly available data — like the kind of information that’s released by NextBus in San Francisco — and, to be sure, Moovit does the same. But it also heavily relies on crowdsourced data, such as figuring out updated bus stops in the case of construction or having up-to-date photos. That’s geared toward making sure users have the best-possible estimates for arrival time and transit to where they’re trying to go.

The app went through a series of iterations, as well, before launching. Meydad basically stuck his team on building individual versions that would maximize each part of the experience before finding all the right data and combining everything into a core application that would convince users to engage in it in multiple different ways, he said. 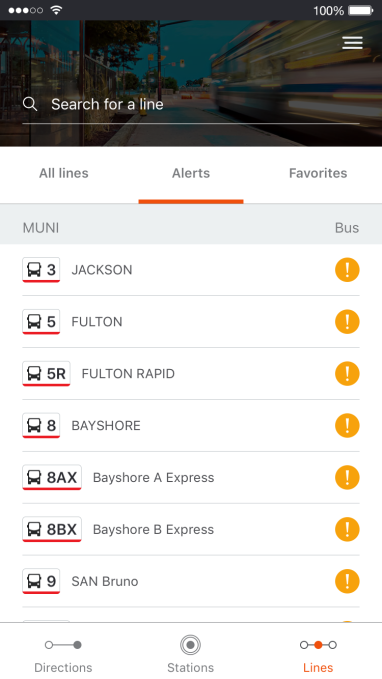 “Imagine an app that had just one screen, no taps at all, directions lines and stations — think of it as Moovit for dummies, or something like an on-boarding,” Meydad said. “It was kind of radically different in its design, eventually it didn’t make it because we showed the engagement rates in this design was not as high. It was eliminating a lot of alternative design based not just on our own feeling but on tens of thousands of users over a period of four months, picking eventually, the ones that performed best.”

To be sure, Moovit is not a new entry into keeping commuters informed. The app, which started in Israel, has 45 million users and most recently raised $50 million in financing. It’s expanded into dozens of countries and continues to localize into new ones, which involves figuring out how to bring in all the right transit information and sorting it out based on where you are in the world.

While the experience has been simplified, it’s still going to have to deal with a lot of competition, both from the likes of Citymapper and new entries like Transit. Moovit tries to peg itself as a sort of Waze-like experience by relying on crowdsourced data, but it’s going to have to do two things to get that done: get people using the app, and get them to contribute data.

And of course, there’s always the opportunity to simply type in your destination with Google Maps. But for Moovit — and other apps — the goal is to not only help plan trips but also simply keep users informed with basic information that they already need. Users might simply need an arrival time because they know where they’re trying to go. Meydad’s hope is that by distilling the service into a few key experiences and making them easily accessible, Moovit will provide some kind of differentiated experience from Google Maps that merits being a completely separate app.