With Unleashed, Foolography is launching the smartest SLR camera remote control yet. Instead of using the camera’s remote control port or trying to futz about with Wi-Fi, the company chose a third option… Using a custom Bluetooth dongle that plugs into the camera’s USB port and leaches power from its HDMI port, Unleashed unlocks the power of your camera from your smartphone.

Smartphones are smart. Cameras are smart. Getting them to talk to each other should be oh-so-much-easier than it is. The camera manufacturers know this, but keep stumbling at the most ridiculous roadblocks; even Sony, which is probably the front-runner in the world of Wi-Fi-controlled cameras, can’t make it easy to control the camera. 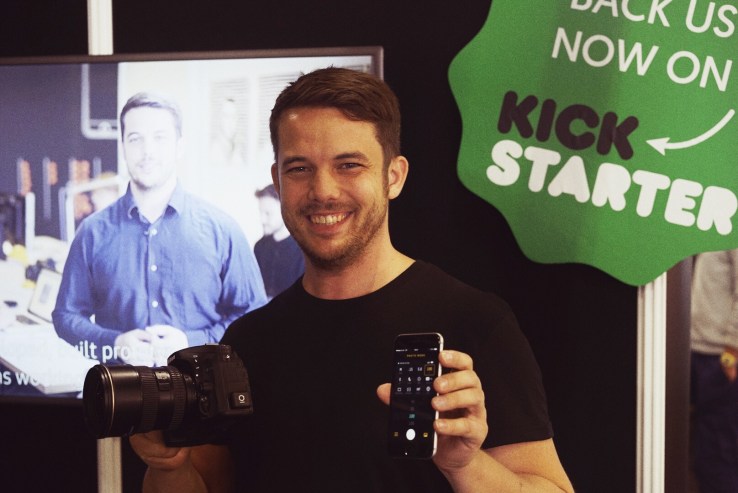 I cruelly tricked Oliver Perialis, founder of Foolography, into posing in front of a photo of himself pitching his product. Because I’m a cruel human being.

This is the thing Foolography is trying to solve with its Unleashed product, which is currently funding on Kickstarter. Unleashed is a tiny, unobtrusive device that plugs into the USB port on the side of your camera. It adds a Bluetooth module, to which your smartphone can connect. From there, you can take full control over all your camera’s features.

At least it’s not Wi-Fi

Isn’t all of that already possible, using the camera manufacturers’ own apps and the cameras’ Wi-Fi connectivities? Well, yes, in theory. In practice, however — have you ever tried using any of those apps? 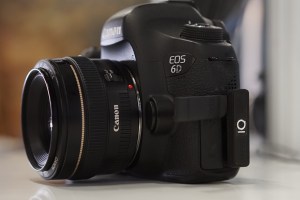 The little thingie marked ‘IQ’ is a prototype of Foolography’s Unleashed. In this case, the version for Canon’s EOS 6D.

“The camera manufacturers are trying to solve the problem with Wi-Fi,” the company’s founder Oliver Perialis told me at Photokina, “but there are huge usability issues. To connect to Wi-Fi on most phones you have to leave the app to go to the settings app, then connect to the camera. If you manage to get it all set up, you have to cross your fingers that you don’t lose the connection, because your phone won’t automatically reconnect to your camera. On top of that, whenever you connect to a Wi-Fi network, phones assume that this is your internet connection, so you lose the internet, too. Bluetooth doesn’t have any of these problems.”

Well, apart from not being able to offer live view, Perialis admits, claiming that the Bluetooth standard isn’t high enough bandwidth to offer a live preview of what the camera is seeing.

Unleashed is a complete refresh of the company’s first product, also called Unleashed (but retroactively renamed Unleashed ’09, as it was launched in 2009). The original was just a way of adding a GPS tracker to certain cameras; the new version is a whole lot more than that.

I wanted to try out Unleashed, but the company didn’t have a working version available at its stand. (“I broke it yesterday when I wanted to do a last-minute update,” Perialis told me). The app’s interface looks great and the company still has nine months to iron out any kinks before its estimated June 2017 shipping date, so fingers crossed for that.

Taking a broader view, when Foolography is able to bring these products to market, the camera manufacturers would be well-advised to pay attention. The company has done a lot of things far better than they have, and either Canon or Nikon could do a lot worse than snapping up the company before the other does.

The product is initially only available for select Canon and Nikon cameras, but the company is open to developing it for other camera platforms further down the road. On Kickstarter, it’s available for €129 (around $145).