Google just sent out invites for an event in San Francisco on October 4th. Rumor has it that the company will reveal its next smartphones at the event.

While the invite itself only features Google’s own logo, the company also just posted a teaser video and site that both strongly hint at a new phone. The URL for the teaser site is madeby.google.com, and unless something has changed, the Pixel brand still stands for devices that are made by Google (and not in cooperation with its partners like LG or Huawei).

According to the latest reports from Android Police, we’ll likely see two Pixel phones (one large, one small — and Google will do away with the Nexus brand). 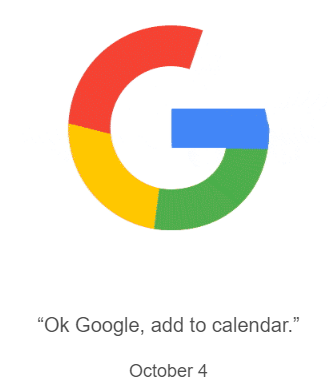 The last time Google held an event for a smartphone launch (almost exactly a year ago), the company also announced the next generation of its Chromecast device and rumor has it that we’ll see a 4K-capable Chromecast this time around. At the same event last year, Google also showed off the Pixel C tablet, though it only launched it a few months later. Maybe we’ll see a new Pixel C, too.

Even if all we see is the new Pixel phones, though, this should turn out to be a pretty interesting event.

We will obviously be at the event, so now is probably a good time to set that Google Now reminder for 9am PT on October 4th.