Apple Pay will arrive in three more countries this fall: Japan, New Zealand and Russia, and will hit the web alongside the launch of iOS 10 on September 13th. The web version of Apple’s payments service will be made available to Safari users on any Mac introduced from 2012 on, which is also running the latest operating system, macOS Sierra.

The company detailed the Japan launch of Apple Pay on stage today at its iPhone 7 event, noting in particular how the service had to be made compatible with a different version of contactless tap-to-pay technology used in the country, FeliCa. Developed by Sony Corp., FeliCa chips are commonly used by Japanese smartphone users who tap to pay for things like public buses and train passes.

Bloomberg had previously reported on Apple’s plans to roll out its payments technology in Japan, noting also how it would work with major players like the Suica and Pasmo networks. Apple confirmed the Suica news today, saying that Japanese users can commute and pay for everyday items with Suica from JR East, as well as make payments in stores, in apps and on the web.

An upgraded version of Maps in iOS 10 will also help Japanese transit riders see ride details, including fare breakdowns that will automatically show Suica pricing on their device, says Apple.

Japan’s major financial brands will support Apple Pay, too, meaning it will work in the country’s largest stores, as well as neighborhood shops and restaurants.

Apple Pay will come to Japan with the launch of the iPhone 7, iPhone 7 Plus and Apple Watch Series 2, the company says. 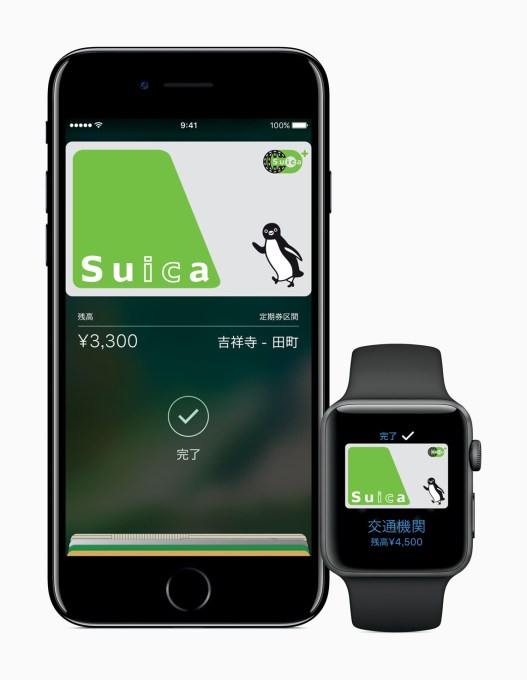 Though not announced on stage, Apple will also expand Apple Pay internationally this fall with a New Zealand launch in October, and a Russia launch pegged for “this fall.”

These countries will join the recently added France, Switzerland and Hong Kong, which went live in July. With those additions, Apple Pay is now live in nine markets, and sees over half of its transaction volume coming from non-U.S. markets.

The payments technology itself is gaining traction, too. It now has more than five times the volume from a year ago, and is adding one million users per week. Consumers have spent billions with Apple Pay, with accelerated growth taking place in the second half of 2015, in particular.

The technology today counts tens of millions of users, with estimated monthly active users up more than 450 percent year-over-year in June.

Apple Pay is live at more than 11 million contactless locations worldwide, with 3 million in the U.S. alone.

The technology also has the lion’s share of the mobile payments market in the U.S., at present. As Phil Schiller touted on stage today, more than 90 percent of wireless transactions are made with Apple Pay.

Apple Pay will arrive on the web alongside the launch of iOS 10, which rolls out September 13. At that time, you’ll be able to use Apple Pay via Safari, as long as you’re running macOS Sierra on a Mac introduced in or after 2012.

To use Apple Pay online, you’ll look for the button at checkout on supported sites, then complete your purchase via TouchID on your iPhone or by using your Apple Watch.

By paying with Apple Pay, your transactions are encrypted between your devices and Apple Pay servers, and the online merchant won’t need to save your actual credit card number, adding another layer of protection.