Google is speeding up its internet services in Asia once again. Fresh from expanding its data centers in the region last year — which are located in Singapore and Taiwan — the company said today that it has switched on a new undersea cable that will quicken services like YouTube and its cloud computing platform.

The cable connects Google’s facility in Taiwan with a location in Japan, which itself is connected to the U.S. via an undersea cable from the FASTER Consortium which has the honor of being the planet’s fastest fiber optic undersea cable.

Google said the Japan-Taiwan cable supports speeds of up to 26 terabits per second. 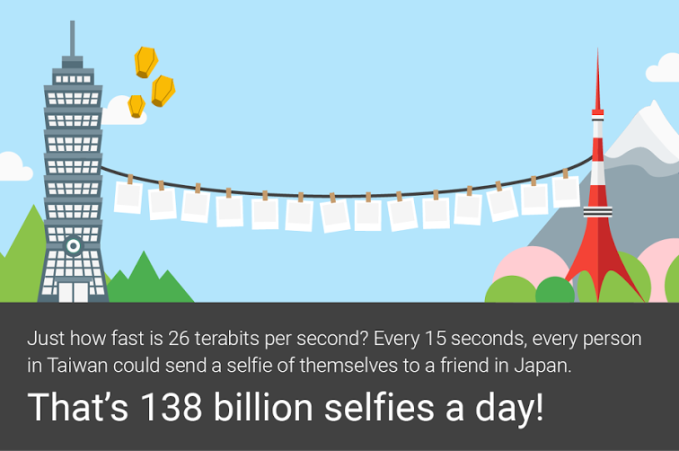 The search giant is particularly keen to increase data speeds in Asia because of the vast numbers of people from the region who are coming online for the first time. In a recent report co-authored with Singapore sovereign wealth fund Temasek, Google said that 3.8 million people go on the internet for the first time each month in Southeast Asia alone — that’s not even including India or other places.

“You may not notice right away, but this new cable should help Google products and services load more quickly across the region. It should also improve the reliability and consistency of this speedier experience, since the cable was strategically built outside of tsunami zones to help prevent network outages related to natural disasters,” Google said in a blog post.

Google said last year it has spent more than $1 billion constructing and staffing its two data centers in Asia, and no doubt there is a lot more investment to come.

“With more people coming online every day in Asia than anywhere else in the world, we’ve been working hard to invest in the infrastructure needed to make the Internet work for all of us who live in the region,” it added.