Sequoia-backed kids educational startup Duck Duck Moose is heading to Khan Academy, to add preschool learning to the non-profit’s digital education offerings. The startup’s 21 mobile apps aimed at children ages two and up are now available for free as a part of the move, which is not technically being considered an “acquisition,” due to the way the deal was funded.

Instead, the 9-person Duck Duck Moose team will be in charge of a new initiative inside Khan Academy, aimed at developing early learning products. Like the non-profit’s other initiatives, this too will be funded by philanthropic support and other community donations. Omidyar Network, a philanthropic investment firm is the first to underwrite the new initiative with a $3 million grant.

Founded back in 2008 Caroline Hu Flexer, formerly of IDEO, husband Michael Flexer, who has extensive startup experience, and designer Nicci Gabriel, Duck Duck Moose is the maker of some of the better kids’ apps on the App Store. 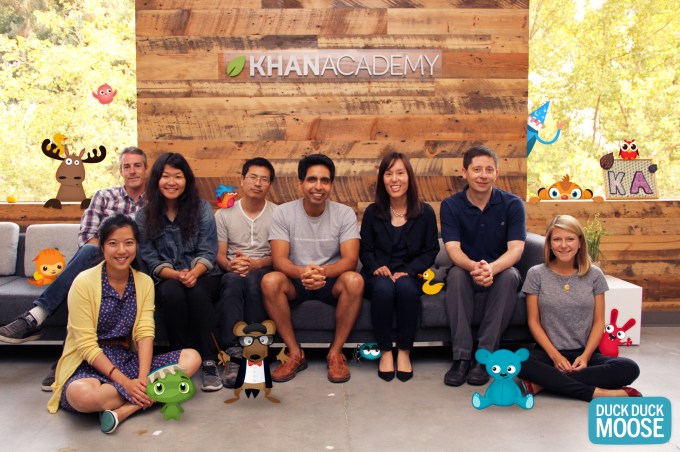 The startup raised $7 million in outside funding from investors like Sequoia Capital, Lightspeed Venture Partners, and Stanford University to develop its suite of apps.

Even in an App Store crowded with choices, Duck Duck Moose’s software tended to stand out due to its quality design and ability to engage children with apps built from the ground-up using original IP, content, drawings, animation and music. Many of the apps featured popular kids’ songs, like “Wheels on the Bus,” “Itsy Bitsy Spider,” or “Baa Baa Black Sheep,” for example, while others focused on learning material like math, spelling or reading.

To date, its 21 apps have been downloaded more than 10 million times.

“We’re joining Khan Academy because it’s the best way for us to have the largest impact on early learning and children,” said Caroline Hu Flexer, in a statement. “We’re excited to make all of our products free so they can be accessible to children all over the world, regardless of their financial resources.” She added that Duck Duck Moose’s original investors, Sequoia and Lightspeed, helped to make the donation happen.

The move, which is being characterized as a “donation,” not an “acquisition,” will also broaden the reach of Khan Academy itself.

Today, the platform is used by 100 million people every year, who access its resources that cover preschool through early college education, including math, biology, chemistry, physics, economics, finance, history, grammar and more. With Duck Duck Moose, however, it will be able to expand its offerings to those children who have yet to enter preschool, as well as early learners.

While a good outcome in terms of being able to keep the learning apps around, and making them more accessible, it’s also a telling example of how difficult it is to run a successful and profitable consumer-led educational app business in today’s App Store. Companies like Age of Learning, now valued at $1 billion, is more of an exception, not the rule. It also leverages its traction in the classroom to target parents, who then buy in-home subscriptions to its service.

Meanwhile, the App Store’s Top Grossing charts in the “Education” category are filled more so with brain-training games like Lumosity, Brainwell, Elevate, and others, not necessarily paid kids’ apps. In fact, the only rival for Age of Learning (aka ABCMouse)’s top spot on the Top Grossing chart is another subscription service, PlayKids.