If customized keyboards for mobile devices are to be the next-gen interface for accessing the wider web – including information you’d normally turn to a search engine to find – then Microsoft today has stepped up its fight with Google with the rollout of a new version of its predictive keyboard app Word Flow. While the app previously offered intelligent word suggestions and support for one-handed typing, the new release now incorporates information from its Bing search engine into the experience, allowing users to look up information on restaurants, news, videos, weather, GIFs and more.

Word Flow was first launched on iOS earlier this spring, following its release on Windows’ own smartphone and desktop platforms. The app then supported what are now standard third-party keyboard features, like the ability to text via swipe, similar to the keyboard app Swype, or tapping on suggested words to speed up typing, for example.

What made it unique, however, was the one-handed typing mode which displays a wheel-like interface that pops off the side of the screen, allowing users to reach all the letters with just a thumb.

Shortly after its iOS debut, though, Google released its own third-party keyboard for Apple mobile devices, Gboard. Unlike Word Flow, its focus wasn’t only on making typing easier – it was about integrating the Google search engine into the keyboard itself. Gboard lets you easily search for things like flight times, news, restaurant and business listings, then just tap to add that information into your chat, or elsewhere. It included built-in GIF and emoji search, too.

In other words, it put the power of Google into the keyboard – the primary interface mobile owners use today to interact with their device.

Now, Microsoft is doing the exact same thing. In version 2.0, out now, the app includes support for Bing, GIF and emoji search, too. It will even predictively suggest GIFs and other things from the web as you type, the company says. 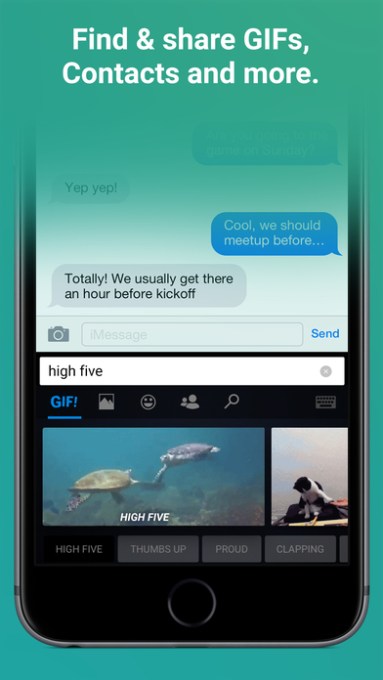 The updated app allows you to look up information from the web, like news, videos, facts, weather forecasts, and more, and it can access your Address Book to find contacts more easily when you need to share a phone number.

Plus, when you find something you want to share with someone you’re chatting with, you can just tap it to send it into your message. If you don’t, the item will remain in your history until you remove it. This feature is nearly identical to how Gboard operates.

Version 2.0 has a few other minor improvements, too, like the ability to control the cursor placement via 3D Touch, various accuracy improvements, and support for the iOS text replacement function.

Developed by Microsoft’s internal R&D division, Microsoft Garage, the app is now one of several third-party keyboards the company has developed for mobile use. It also previously released Hub, which is focused on more multitasking and access to productivity apps like SharePoint and OneDrive; and it acquired the popular app SwiftKey earlier this year for $250 million, which recently debuted another application, aimed at predictive emoji search.

That being said, while both Microsoft and Google are hoping to find a new way to reach users through their keyboards, it’s not clear yet how many users are adopting these products as their primary keyboard on mobile. Word Flow, for example, is ranked #48 in the App Store’s Utilities category in the U.S., according to App Annie. That’s up from #78 just yesterday, and likely a boost due to the new release. Gboard is currently #54, and far behind Google’s Search app, which is #2.

Word Flow is a free download on the App Store, here. (The app is not working on the iOS 10 developer beta, however, so testers should avoid for now.)