Mathias Biilmann — a former CTO of a firm that built websites for small businesses — says developers have gotten so used to using Github as a central workflow, they expect the entire rest of the developer experience to work the same way.

“The way that a front-end developer would work would be to go into a server and change how things were structured, but then Git came in and became the basic way of operating,” Biilmann, co-founder of Netlify, said. “You get more and more the expectation that pushing to Git something happens.”

That’s his goal for his and his co-founder Chris Bach’s new company. Netlify basically initiates its own kind of repository that pushes both to a Github repository and its own services. Then, those updates execute and are distributed across a wide network of content delivery networks to deliver pre-built static pages to visitors — with Netlify picking the best one from the cloud services available. Netlify then distributes all those static sites across its own content delivery network, meaning that when visitors access those pages they are pre-built.

The idea here is that, instead of a program running every time a visitor goes to a page, the pre-loading has already been done and the user is immediately served a page that’s directed from the closest geographic server, in order to reduce load times. More dynamically built pages may also be vulnerable to slowdowns if they suddenly get a spike of traffic, Biilmann said.

The hope is that, by simplifying the deployment process, he can convince developers that are looking for a lightweight page experience to use something like Netlify instead of simply deploying directly to Amazon Web Services or other providers. To do all this, the company has raised $2.1 million from Bloomberg Beta and Tank Hill Ventures.

Part of the process that’s developed over time is simply pushing Git updates directly to a server, like AWS. The expectation over time has become to simply run a push update through a command line and expect it to work on the other end. Since this has become an increasing expectation over time, especially with front-end developers, Biilmann and his team decided to build a set of tools that bundled together all the necessary components of building out those pages and deploying them.

So, Netlify enables those developers to roll out changes across a larger network of servers that can easily be rolled back with those kinds of simple updates. And all this can be done directly from a command line interface. 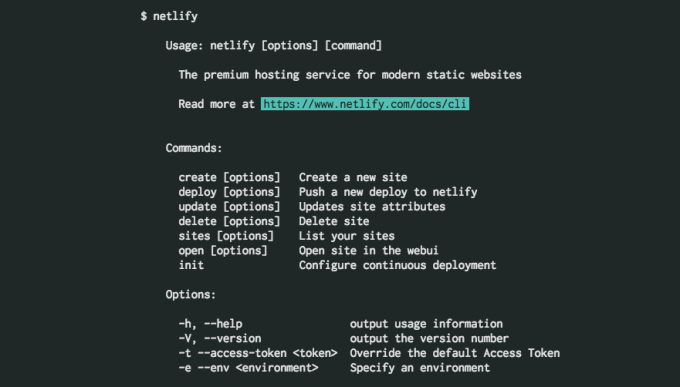 So, why pre-built? There are a few reasons: sometimes, when visiting a site, the page will build dynamically based on the applications running on something like Amazon Web Services. That not only requires the page to build itself, but also leaves open the opportunity for malicious attacks (like finding a vulnerability in a Flask server, for example). By essentially pushing the site in isolation from a CDN, they aren’t tapping into a dynamic setup that might be open to attack.

“We say static site it’s not like 1994 where sites were static, 99.9% of sites serviced by Netlify are very dynamic,” Biilmann said. “They just interact with the browser instead of having to be built server-side every time.”

If a developer ends up breaking a line of code, they can quickly roll back to a previous instance of the site that’s out there. While most of the operations can be done from a command line interface, Netlify users can also view a snapshot of their running pages through a web-based interface and monitor their health.

At the moment Netlify doesn’t serve tools that interact with a database layer. Biilmann says this is primarily because many modern pages implement an experience that’s hooked through a set of APIs into other services. One example he gave would be running comments through an API like Disqus, or running search functions through another API.

Investors in Netlify include Heroku founder Adam Wiggins and Github founder Tom Preston-Werner, who clearly seem to have an interest in helping individuals deploy fuller — and faster — website experiences with a simpler developer experience.

The challenge for Netlify will to keep those experiences simple and quickly adjust to developer demands for these kinds of tools. It’s not much of a stretch to imagine something like AWS implementing a similar tool, and with so many developers already running on AWS, it might be hard to peel them away. But Biilmann says that, while larger companies have enjoyed the capability to deploy these kinds of experiences, tools like these will help attract a wider long tail or developer activity.