DroneDeploy released a new study of the commercial and industrial drones market this week, revealing bad news for the makers of fixed-wing drones — quadcopters are far outpacing this type of unmanned aerial vehicle in every industry.

A fixed-wing drone can fly farther and cover a greater area on a single charge than multi-rotor counterparts, generally. But they are also used in just 6 percent of the flights for commercial and industrial purposes, DroneDeploy found.

Meanwhile, quadcopters, which promise to be easier for drone operators to control in flight and allow for rapid takeoff, are used pervasively.

DroneDeploy CEO and co-founder Mike Winn explained, “People would rather fly a quadcopter multiple times over a large area, or stop to change batteries, than go through the process of assembling a fixed-wing drone before a flight.”

Thankfully, most manufacturers of fixed-wing drones for commercial and industrial use have also developed quadcopters or other multi-rotor models. 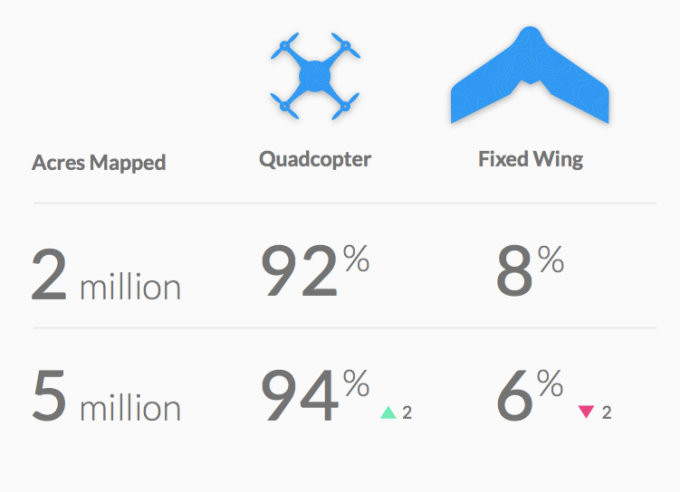 Agriculture is using drones more than any other industry, so far, followed by construction. But the fastest growth in adoption of drones is seen in mining, inspection and oil and gas.

New industries are finding uses for drones, these days, including: education, emergency services and real estate, though institutions in these industries were barely even testing drones just one year ago.

DroneDeploy provides software and systems to help organizations use drones for commercial and industrial purposes of any kind, from mapping and measuring traffic, to surveillance and venue security, to spraying crops and monitoring crop health from on high.

The company based its study on the drone-related activities of its customers in 130 countries over the past 16 months.