Yet one more significant piece of M&A in the online recruitment industry. Today Randstad Holdings, an Amsterdam-based human resources and recruitment specialist, announced that it would acquire job hunting portal Monster Worldwide, for $429 million in cash.

The deal works out to $3.40 per share in cash and is a premium on Monster’s share price at closing on Monday of $262 million. But it is a far cry from the heady days of 2000 — when Monster, which had gone public soon after being founded in 1999 (itself the result of a merger of two early job startups), had a share price of over $91 and a market cap of nearly $8 billion. Even in 2007, when its stock was around $51, Monster was valued as high as $5.5 billion. (Sound familiar? It’s a song that gets played out in many versions.) 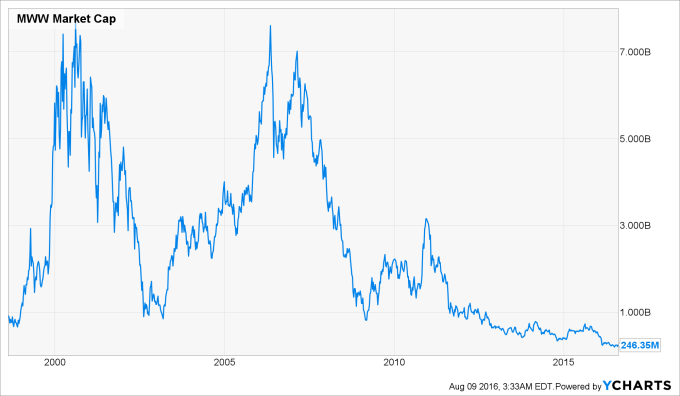 It’s still an interesting exit for Monster, which was one of the veterans (and notably, survivors) from the first dot-com boom. It comes amid a spate of M&A activity in the space. Just in June, Monster itself acquired Jobr, a “Tinder for jobs.” And last month, Indeed.com acquired Simply Hired. Indeed itself is owned by Japan’s recruitment and HR giant, Recruit Holdings.

Monster will keep its brand and will operate as a separate entity, but the bigger idea here is to consolidate different aspects of the recruitment and employment industry for better economies of scale and a “portfolio of HR services,” in the words of Randstad.

“In an era of massive technological change, employers are challenged to identify better ways to source and engage talent,” said Jacques van den Broek, CEO of Randstad, in a statement. “With its industry leading technology platform and easy to use digital, social and mobile solutions, Monster is a natural complement to Randstad. The transaction is aligned with our Tech and Touch growth strategy and reflects our commitment to bringing labor supply and demand closer together to better connect the right people to the right jobs. We look forward to welcoming the Monster team and working together to shape the evolving global job industry.”

For Monster, this is an important move to combine with a strategic and adjacent business at a time when companies like Recruit are dwarfing it in the pure-play recruitment space. The company is active in 40 countries, and had around 50,000 employers in its database according to its Q1 report. But in comparison Simply Hired alone (as one Indeed property) covers some 50,000 employers.

“Joining Randstad provides a unique opportunity to accelerate our ability to connect more people to more jobs,” said Tim Yates, CEO of Monster, in a statement. “Together with Randstad, Monster will be better positioned to fulfill our core mission, and our employees will benefit from becoming part of a larger, more diversified company. Equally important, this transaction offers immediate value to our shareholders. We are excited to join and be supported by Randstad, as we continue to build the best recruiting media, technologies, and platforms. We look forward to working with the Randstad team to ensure a smooth transition.”

While Monster’s bread and butter and mainstay is its website, Randstad has a focus on recruitment centers. It has some 4,500 branches and says it’s placed some 2 million people in jobs. This will give them an online component to expand that.