When Oracle bought NetSuite yesterday for a cool $9.3 billion in cash, it let the world know it was now totally serious about growing cloud computing revenue. That wasn’t always the case.

In the early days of the cloud, Oracle was content to sit on the sidelines and make fun, while it raked in traditional license and maintenance revenue. In fact, CEO Larry Ellison famously ridiculed the cloud in a 2008 interview, saying the computer industry was “more fashion-driven than women’s fashion” when it came to cloud computing.

Times have changed, however and as the industry has shifted toward the cloud, Oracle finds itself far behind in a market dominated by AWS, Salesforce, Microsoft and Google.

That left it two choices — build or buy. While Oracle has been in the process of building out its own cloud infrastructure, and its cloud revenue has been growing,  it also had to recognize that it’s hard to play catchup. An easy way to grab market share it to buy an existing company with a big customer list.

One thing Oracle has plenty of, is money. According to YCharts, Oracle had over $56 billion in cash prior to yesterday’s shopping spree. While the price tag was a big chunk of money by any measure, it was money the database giant could afford to spend, and it appears to have gotten a fair amount of bang for its buck. 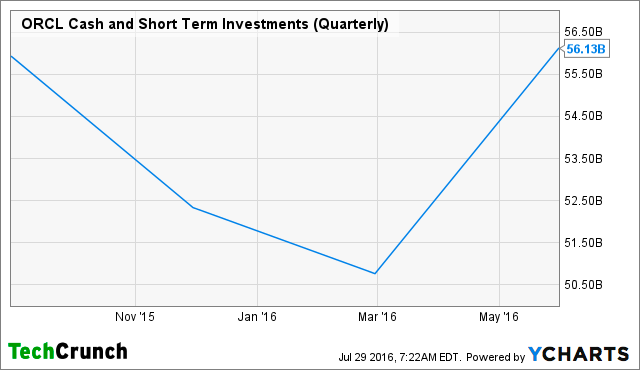 With NetSuite, Oracle has a cloud enterprise resource planning (ERP) product, which offers financial software delivered via the cloud. In fact, one of its claims to fame is that more companies have IPO’d using NetSuite than any other company (according to Constellation Research).

One of the interesting aspects of this deal is that NetSuite and Oracle were already pals with Ellison investing in the company early on. Yet Oracle went out and spent top dollar anyway.

“Larry Ellison was actually involved in setting up NetSuite in the late 90s, and prior to its going public, held a large share of the company,” Digital Clarity Group analyst, Jill Finger Gibson told TechCrunch.

Larry Ellison was actually involved in setting up NetSuite in the late 90s, and prior to its going public, held a large share of the company. Jill Finger Gibson, Digital Clarity Group

But it was more than a friend helping a friend. There was a core business reason for this purchase around cloud revenue. “Oracle is rapidly shifting its business model from licenses and maintenance to cloud subscriptions. NetSuite accelerates this revenue shift, adding nearly $1 billion in revenues to Oracle’s SaaS portfolio. NetSuite gives Oracle the Number One position in SaaS ERP, supplementing its Oracle Cloud ERP offering,” Forrester analyst Paul Hamerman told TechCrunch.

The deal also gives Oracle entrée into the valuable mid-market, an area it could exploit further with NetSuite in the fold. “NetSuite has always made a very conscious choice to go after [the mid-market] segment, and while Oracle is still considered primarily an enterprise player, there are many more mid-market companies than enterprise companies, so for future growth, Oracle needs to better penetrate that segment,” Gibson said.

Of course, it didn’t hurt that making the purchase keeps NetSuite out of the hands of rivals like SAP and Salesforce.

There is always going to be customer anxiety when it comes to a deal like this, especially when a player the size of Oracle is involved, but whether it’s a positive move for NetSuite’s customers depends on who you ask.

R Ray Wang, principal analyst and founder at Constellation Research mostly sees business as usual, but warns that customers may want to make deals with NetSuite sooner than later.

“Oracle has had a good history with post-merger integration. NetSuite will be able to take advantage of many of Oracle’s technical assets and customers can expect to benefit from the synergies. Customers should try to renew more favorable terms before Oracle takes over in order to sign more beneficial contracts,” Wang said.

Forrester’s Hamerman isn’t so sure customers will win in this deal as Oracle could put the price squeeze on them. “Oracle will likely put more price pressure on NetSuite renewals and impose more regimented support procedures, undermining NetSuite’s congenial SaaS culture,” he said.

That said, Hamerman believes that customers could benefit if Oracle uses its deep pockets to update the NetSuite technology stack and deepen its capabilities.

The deal could mark the beginning of the end for some NetSuite employees as Oracle tends to move aggressively to remove employee overlap. “[NetSuite] had a net loss of about $125 million in 2015, with its largest operating expense being sales and marketing (65% of total expenses). It’s likely that there will likely be a bunch of redundancies among NetSuite sales and marketing employees,” Gibson said.

A big winner here is Ellison himself, who used his company’s money to take a big player off of the board, and gains personal wealth in the process. “Ellison really wins — he own [around 40 percent] of the company personally. How nice to be able to make a personal profit like that and pay yourself from your own business. Wow.” Scott Liewehr, Digital Clarity Group president said.

As with any deal, there are no guarantees about how well the organizations combine or how well Oracle can mix a SaaS vendor with a different culture into its company, but given the price tag and Oracle’s track record of buying and subsuming companies, it certainly has history in its favor — even if it didn’t always love the cloud.