Got a bright idea for a company, but need a co-founder? You’re about to start walking down a really complicated path, fraught with dangers behind every turn. Until very recently, there were two companies to help you along: CoFoundersLab and FounderDating. Until the former acquired the latter, that is, continuing CoFoundersLab’s modus operandi of acquiring its competitors. 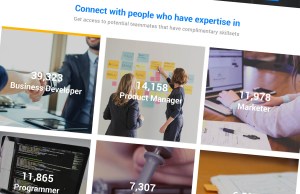 Is your future CxO hiding behind one of these buttons?

Both sites were successful in their own right and today, the two communities start the merging process that will help the FounderDating customers integrate into the the CoFoundersLab platform over the next few months, trebling the size of CoFoundersLab’s current user base.

“There were things CoFoundersLab excelled at and things that FounderDating did better than us,” says Alejandro Cremades, co-founder and executive chairman of Onevest, which operates CoFoundersLab, alongside with the 1,000 Angels matchmaking site for angel investments. He subscribes to the vision that a startup is more than the sum of its parts and emphasizes that he feels the combined communities will be far better than either on its own. “Combined, we will truly be a great resource for the startup community.”

There will undoubtedly be some shake-ups for both companies, as the New York based acquirer and the San Francisco-based acquiree find ways of working more closely together.

“Engineering and related staff are staying on, as will our city ambassadors,” says Jessica Alter, founder and CEO of FounderDating, outlining the plans for the future. “I will be staying on as an advisor to the company.”

The new CoFoundersLab site is designed to make it easier to find the perfect co-founder.

To celebrate the acquisition, CoFoundersLab is also launching a new site today, starting with bringing the tremendously successful FounderDating discussion boards under the CoFoundersLab umbrella.

The most recent purchase continues the company’s aggressive strategy to buy out its competitors to further solidify its place in the market. In 2012, CoFoundersLab bought out TechCoFounder.com and FounderMatchup.com and, in 2014, the company snatched up Bizpora, a networking site aimed at entrepreneurs.

FounderDating was originally launched in 2012 by Jessica Alter. It is best known for its namesake concept of “dating” potential cofounders, advisors and potential funders before tying the proverbial cap table knot. The site also has a large element of learning, with the aforementioned discussion / Q&A platform.

The new site also further shines the spotlight on CoFoundersLab’s Learning Center, which was launched last week. Its aim is to help startup founders make new and innovative mistakes, rather than repeating the same old ones over and over again.

The price tag does give me pause, however — for a platform that is aimed at finding co-founders and early-stage investment, I’m not completely sure how to feel about a thousand-dollar annual price tag to get access to the courses offered by the Learning Center. It seems like an awful lot of money for companies in a stage where a grand buys an awful lot of ramen noodles to stretch out a company’s runway.