On September 8, NASA will launch the OSIRIS-REx spacecraft on a mission to an asteroid and return a sample of it back to Earth — NASA’s first mission of this type. In doing so, NASA hopes to learn more about the early formation of the solar system and, possibly, the origin of life.

OSIRIS-REx, which stands for Origins Spectral Interpretation Resource Identification Security – Regolith Explorer, will travel to a near-Earth asteroid known as Bennu. Bennu is of particular interest because it’s a B-type asteroid, which means there’s a good possibility that it’s covered in carbon material and organics, the building blocks of life.

In addition to its scientific value, Bennu is classified as a Potentially Hazardous Asteroid and has a high probability of impacting our planet in the 22nd century. Studying Bennu now could be beneficial down the road in the event that future scientists and engineers need to develop an impact mitigation mission. 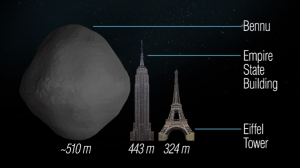 Upon arrival at Bennu in 2018, the spacecraft will identify a scientifically interesting section of the rock and use its robotic arm to capture a 2.1-ounce sample. OSIRIS-REx is scheduled to depart the asteroid in 2021, and return the sample to Earth in 2023.

Scientists want to get their hands on an asteroid because these are primitive rocks that represent the early building blocks of our solar system, and possibly of life. In general, it’s believed that asteroids are just leftover debris from the formation of the planets in our solar system, created billions of years ago. Studying them could reveal details about our early cosmic history and how planets form.

There’s also an interesting hypothesis, known as panspermia, that microbial life was carried to Earth by asteroids, meteoroids, comets or other orbiting planetary bodies. The idea here is that orbiting bodies like asteroids are carriers of basic forms of life and have the ability to distribute them throughout the solar system, and possibly the universe.

And the good thing about asteroids, from a scientific point of view, is that they likely haven’t changed much since their formation. On Earth, we have recycling processes like erosion that constantly change our surface geology. Asteroids don’t have things like oceans, wind, rain or tectonic plates to wipe their history away. In many ways, their history is preserved, making them ideal candidates for scientific study. 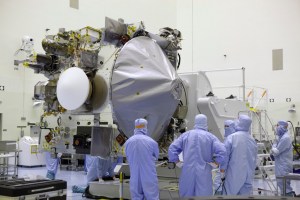 Once OSIRIS-REx arrives at Bennu it will need to identify the most scientifically interesting section to bring home. In an effort to test the panspermia hypothesis, NASA’s goal is to home in on a section that contains organic material, one of the building blocks of life.

To find that perfect piece to bring home, the spacecraft is equipped with an instrument that will analyze areas of the asteroid and determine their composition. Known as the OSIRIS-REx Visible and Infrared Spectrometer, or OVIRS, the instrument can identify different mineralogical and molecular components by analyzing how that particular section of the asteroid absorbs and reflects light.

Different minerals and molecules have unique “spectral signatures.” OVIRS will measure how the asteroid surface interacts with visible and near-infrared light and match the outcome to known spectral signatures to determine the composition of that section.

“OVIRS is key to our search for organics on Bennu. In particular, we will rely on it to find the areas of Bennu rich in organic molecules to identify possible sample sites of high science value, as well as the asteroid’s general composition.” — Dante Lauretta, principal investigator for OSIRIS-REx

OSIRIS-REx will conduct a detailed survey of Bennu for over a year to create a map of potential sample sites. After NASA selects the final site, the spacecraft will move in to the asteroid for sample extraction. OSIRIS-REx will make contact with the surface for about 5 seconds and shoot a burst of nitrogen gas at the asteroid’s surface. This burst of gas will stir up small pieces of rock, which will then be collected.

OSIRIS-REx surveying Bennu / Image courtesy of the University of Arizona

If the first attempt fails, OSIRIS-REx has enough stored nitrogen gas for two additional attempts. The sample will be stored in the spacecraft’s Sample Return Capsule (SRC).

SRC has the incredibly important job of keeping the sample safe and free of contaminants throughout its journey back to Earth and, ultimately, into a laboratory. If the canister breaks and opens upon touchdown, for example, the sample loses much of its scientific value and the entire mission could be considered a failure.

Assuming all goes according to plan, the sample will arrive on Earth in 2023 and be transported to NASA’s Johnson Space Center in Houston, Texas for analysis. Scientists will spend the next couple of years studying the sample in the hope of better understanding how planets form and, potentially, the origin of life here on Earth.