It’s no secret that Israel is a hotbed of technological innovation. Just over the past few years the country has given birth to popular consumer startups like Waze, Viber and Fiverr. Plus, Israel also is the birthplace of many hard science inventions like USB Flash Drives and coronary stents.

But Israel is at a crossroads of sorts. While the country wants to proudly show off these technology “wins”, they are also mindful of the fact that there’s no point in remembering the past if they can’t continue to drive innovation going forward.

The solution? Using tales of the past to inspire the next generation of inventors and entrepreneurs.

One way Israel is accomplishing this is through former President of Israel Shimon Peres’ new Israeli Innovation Center at the Peres Peace House in Jaffa.

Announced today, the center will highlight inventions and companies already created in Israel as well as future Israeli technologies yet to be developed.

But the point of the center isn’t to just brag about Israel. In fact, President Peres noted that the main point is to ensure that Israel never stops innovating:

The primary focus will be on the path to the future. We will prove that innovation has no limits and no barriers. Innovation enables dialogue between nations and between people. It will enable all young people – Jews, Muslims and Christians –to engage in science and technology equally.  Here we will emphasize that we can promote peace from childhood, and we will spark the imagination of every boy and girl and enrich their dreams.” – Former President Shimon Peres

So how will it achieve this? Firstly, part of the center will dedicated to “showcasing leading Israeli companies”, and Israeli inventions that span across different industries.

But more importantly, the rest of the center will serve as a community space. It will be a place for entrepreneurs to meet, work, learn and even participate in hackathons. Peres emphasized that it will be a place to gain hands-on learning experience not found in a traditional school or university.

The former president sees technology as the best way to better society and create peace in the world, and wants to make sure the next generation of makers and entrepreneurs are both inspired and trained to be able to do so.

And judging by the guests of honor at the dedication it’s safe to say that this will be the flagship technology center for the entire country – the event was attended by the country’s three most important people – former President Peres, current Israeli President Reuven Rivlin, and current Israeli Prime Minister Benjamin Netanyahu.

In fact, all three tried virtual reality headsets on at the ceremony. President Peres told us that trying VR was “something totally new,” and could help create the dreams that create a new reality”. 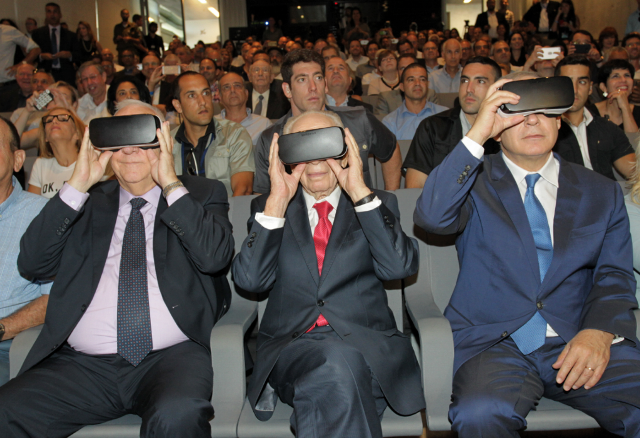