Across 1,000 acres of cotton plants in Arkansas, Tyler McClendon is running an experiment.

The seeds are the same, as are his company Oxbow Agriculture’s methods of growing them. But just ahead of planting the cotton seeds in April, Oxbow coated them with a special microbe not usually found in its cotton plants. Their presence is expected to increase McClendon’s cotton yield by about 10 percent.

The microbes are the first commercial product from Indigo, a Boston startup that is testing bacteria, fungi and other tiny organisms’ ability to improve crops’ hardiness. The company announced a $100 million Series C funding round today that will go toward expanding research and development, and to prepare for the launch of a similar product later this year targeting wheat.

Officially launched today, the cotton treatment contains bacteria harvested from cotton plants that Indigo observed continued to thrive even under drought conditions. The product is expected to give other cotton plants a similar ability.

Microbes are important to plants, but we only know how or why in a few use cases.

Despite humans’ use of microbes in agriculture for thousands of years, what companies like Indigo are doing is fairly new. We know microbes are important to plants, but we only know how or why in a few use cases. Indigo, along with other startups and some incredibly large competitors like Bayer and Monsanto, are racing to find novel microbes that boost plants in some way. They’re still focusing on singular microbes and plant stressors but expect some early victories.

“Right now there’s a lot of low-hanging fruit,” Indigo CEO David Perry said. “But increasingly, success will come to those who are the most sophisticated about how to do microbial isolation and sequencing and computational biology. That’s what we’re really investing in.”

Thousands of years in the making

More than 2000 years ago, the Romans began practicing what’s known as crop rotation. If you grow a crop in a field year after year, soil quality diminishes and leaves plants undernourished and more susceptible to disease. The Romans realized that by regularly switching which type of plant they grew or moving soil between fields, they could restore fertility and preserve the health of their farm.

Legumes were an especially effective addition to the rotation. Scientists wouldn’t discover for many hundreds of years that the roots of crops like lentils and peas are closely linked to bacteria that pull nitrogen — an essential plant nutrient — from the air and into the soil where it can be gobbled up by the legume plant. Any excess nitrogen nourishes whatever crop grows in the field next.

Crop rotation held on for hundreds of years, but in the 1900s a changing understanding of chemistry finally allowed farmers to plant the same crop on the same land year after year. Today, farms feed their plants with commercially produced nitrogen, not to mention insecticides and as much water as they need. Plants grow big and plentiful, but lose out on some of the natural benefits of older farming practices.

There are just a lot of different ways in which microbes can alter different aspects of a plant’s physiology.

We know now that modern farming practices can be harmful to the environment and potentially to human health. The organic food movement is just one reaction; farmers are also turning to sensors and data to reduce the amount of water, nitrogen and pesticides they need to apply to their plants.

GMO plants, which can be designed to stand up to environmental factors like drought and insects or simply to be more nutritious, are another modern solution. Unfortunately, they carry their own controversy. What’s certain is that with a growing population we need more food that can grow in a more sustainable manner. Indigo, along with its competitors, could be a new alternative.

The 1980s kicked off a new era in our understanding of plant-microbe interactions. It was well-established that bacteria could fix nitrogen, and researchers began to expand their search for microbes with other beneficial properties. The science wasn’t advanced enough to bring a boom in plant probiotics, according to Iowa State University plant pathology and microbiology researcher Gwyn Beattie, but scientists took note of the field.

A few products eventually took off. While corn grown in a field year after year will breed pathogens in the soil, some crops such as wheat do not. Researchers finally discovered a bacteria associated with their roots that kills a fungal pathogen. Now, it’s commonly applied across the entire wheat-growing region of the Pacific Northwest.

Indigo falls into a relatively recent group looking into adapting plants to use less water. Other companies are looking at controlling specific diseases or stimulating plant growth.

DNA sequencing and data processing are converging in such a way that you can relatively quickly and inexpensively determine an enormous amount of information about a microbe. Indigo has collected tens of thousands of plant samples from around the world in search of microbes, which Beattie said is the easy step. The hard part is actually finding a useful microbe. So far, Indigo has analyzed around 40,000.

Indigo was founded in 2014 under the name “Symbiota.” Co-founder Geoffrey von Maltzahn was working out of Flagship Ventures — a Cambridge, Massachusetts-based VC firm that directly employs scientists — when he decided to begin collecting and analyzing microbes found in plants.

von Maltzahn had previously founded Seres Therapeutics, which finds and commercializes microbes to treat human disease. As Indigo’s company lore goes, he decided to take a similar approach to plants. While many researchers focused on the microbes found in the soil around plants — where billions of organisms that may or may not have a relationship with the plant can be found in every handful of dirt — he looked within.

“The approach that our founders had was based on a simple insight: Plants have been growing in that soil for hundreds of millions of years. If you want to find what microbes are good for the plant, then you should look inside the plant,” Perry said. “That approach has really paid dividends. It’s given us an enormous boost in our ability to find microbes — ones that have significant benefits.”

Historically, researchers have focused on microbes found in the soil around plants because of ease of detection. While they are incredibly important, microbes found within a plant are likely to have the closest relationship with it. Research into organisms that live inside plants increased ten-fold from 1995 to 2015. The spike is due in part to the development of tools that can detect and characterize the microbes, which are found in much smaller numbers than their soil-dwelling cousins, Beattie said.

Since its founding, Indigo has gone on to collect plant samples from around the world. There is beach grass, cotton and wild predecessors to corn–as much diversity as Indigo can find. They are shipped to Indigo’s office on the outskirts of Boston’s historic Charlestown neighborhood, where they sit in a freezer to await study.

In starkly white laboratory rooms lined with cluttered desks, a segment of Indigo’s 80-person staff spends its days isolating microbes from the plants, synthesizing their DNA and looking for markers that indicate they are similar to another microbe with a useful quality. Indigo’s team also studies methods for growing and applying the microbes and conducts field tests across multiple continents.

You need 40,000 plant samples to find just a few interesting microbes, because our understanding of how plants and microbes interact is still so limited. One microbe might improve drought tolerance by helping a plant to grow larger earlier in the season, while another might promote a larger root network that’s better at finding water. A specific bacterium might boost a plant in Texas and have no effect at all in Oregon. Indigo isn’t necessarily concerned with figuring out the mechanism that causes microbes to have a certain effect; they just want them to work.

And so by brute force they are analyzing them by the thousands, and then testing the promising candidates in grow rooms and out in the field. The company has filed more than 150 patent applications to date.

That lack of understanding of what can be a very complicated relationship has left many farmers and scientists skeptical of anyone touting microbes as a quick fix. Beattie said it isn’t surprising to hear of a microbe that can increase growth by 10 percent. There are other labs claiming numbers much higher than that.

The question is whether what works in a lab and appears attractive in a research journal can translate to the field. It usually doesn’t. Jean-Michel Ané, who leads a lab studying plant-microbe symbiosis at the University of Wisconsin-Madison, said he has found few plant probiotic products marketed to farmers to have a demonstrable effect.

“The problem is that all the products that I have seen so far have very limited and very variable effects when you test them in real field conditions,” Ané said. “Sorry to be so negative, but there is a lot of foo-foo dust sold to farmers these days that does not work.”

In Indigo’s grow room — a room tucked into the back of its office that’s so brightly lit by a ceiling crowded with full-spectrum lamps you need to wear sunglasses — it’s possible to see microbe-treated crops growing at varying rates after being subjected to different stressors.

In a greenhouse overlooking Boston’s Charles River, I examined strawberry plants subjected to a similar variety of tests. Some microbe-treated plants had grown larger and produced more flowers, which is linked to more strawberries. Another set didn’t fare any better than the control plants.

There is a lot of foo-foo dust sold to farmers these days that does not work.

The first farmers using Indigo’s cotton product are halfway through their first growing season. While McClendon said he is reserving a verdict for the end of the growing season when he knows just how much cotton he can harvest, he sees signs the Indigo microbes are having a positive impact.

Indigo is wooing farmers with an unusual business model. Instead of requiring them to buy its microbe treatment upfront, it will likely collect around a third of the profit generated by farmers’ increased crop yield.

“Farmers who otherwise take years to try the product out are compelled to try it out in a big way from the beginning, because there’s essentially a really big upside in crop production and little downside,” McClendon said.

Perry assured me Indigo’s microbes are safe. And in a world where a 10 percent increase in yield is impressive, he isn’t too worried about creating a super plant. They’re annuals, anyway, which means they need to be replanted each year.

If Indigo cotton and wheat take off, it will put the company at the forefront of an industry that could grow immensely over the next decade. Indigo plans to innovate quickly. While a GMO product can take 10-15 years to gain approval, Indigo can develop and release a new plant probiotic within 2-3 years. The company is already planning to target new crops and regions.

The science is finally there to find microbes that can help plants, according to Beattie. The money to back research is arriving, too.

“We’ve only really understood the tip of the iceberg for all this time,” Beattie said. “Without looking, a few (microbes) were known. Now that we are looking, there’s a lot of potential for discovery.” 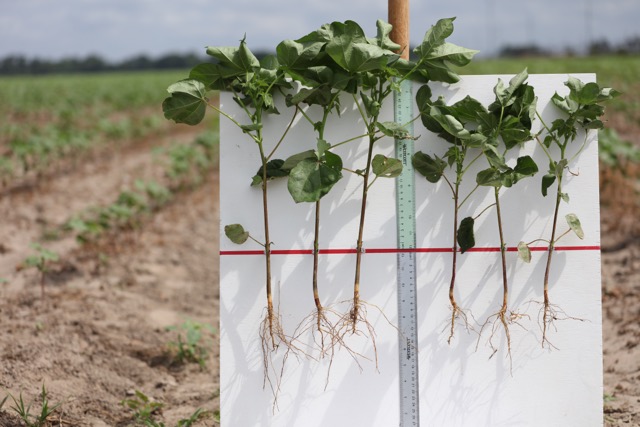