In the midst of thrashing a virtual lightsaber all around my body with all of the sound effects, it’s a bit hard for me to ignore the increasingly apparent point that nostalgia will play a huge role in getting people hooked on AR and VR.

Pokémon GO has already ignited this huge feverish debate around the future of augmented reality and what its adoption will look like, but it has essentially done so through capturing a lot of big kids’ imaginations in letting technology help them relive their childhood fantasies.

In many ways Trials of Tatooine, a VR experience available now on Steam for the HTC Vive, is this exactly. It begins with a brief non-combat experience where you listen to Han Solo instruct you to make repairs on the Millennium Falcon (just pushing lots of buttons) all while getting shot at by TIE fighters. 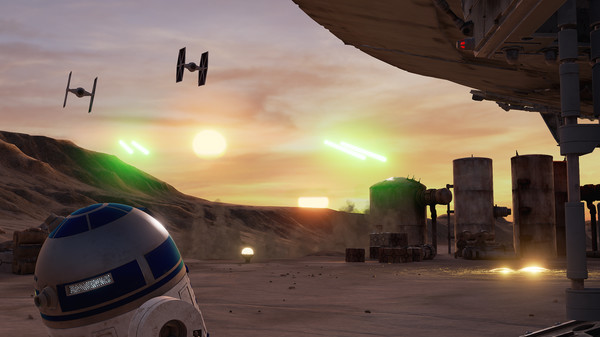 But this all really only exists to prepare you mentally for the awe-inspiring moment of getting a lightsaber into your hand for the first time. As soon as I grabbed the iconic weapon from R2-D2, I instantly flashed back to a 10-year-old Lucas lightsaber battling my friends and trying to make the most accurate sound effects possible as we fought our hearts out until someone got hit in the face and started crying.

This nostalgia-conjuring of mine is something that theoretically should be pretty well-exhausted for Star Wars after the all-Star-Wars-errythang media and merchandising push that defined a good deal of 2015. But even so, the feeling of actually holding the Vive controller with two hands and deflecting droid laser beams was a geekgasm that’s difficult to move past.

This isn’t the most dynamic experience I’ve had on Vive by any means, it’s obviously built as another demo for people to see the potential of VR storytelling in video game environments and it honestly does quite well there. Some early reviewers of the game on Steam have expressed dissatisfaction with the breadth of the experience, and feel as though it was over-promised and over-hyped, a dangerous and common occurrence in the VR content space these days.

I will say that Trials of Tatooine does say great things for the potential of Lucasfilm’s ILMxLAB, which is already aggressively experimenting with content for VR while also embarking on some stranger journeys with Magic Leap to embrace mixed-reality storytelling.

Most VR content is crap these days, but the ones that are showing a lot of promise aren’t just giving people moments of photorealistic graphics or real world physics, they’re convincing users that some impossible things can happen with a little bit of virtual surreality.