After years of battles in Brussels and beyond, search giant Google has come under yet more fire from antitrust regulators in Europe concerned about the its dominance in online advertising. Today, the European Commission announced that it has sent further Statements of Objections to the company, accusing it of abusing its dominant position in search in areas like comparison shopping services and also by restricting the possibility of third party websites displaying search results from Google’s competitors, ads that would directly compete against Google’s own AdSense for Search product.

These new objections come on the heels of a separate antitrust investigation started in April of this year around Google’s Android mobile operating system and apps that are bundled with it, but essentially also point to the fine line between a company providing services that have become natural monopolies by virtue of being so useful, and those services restricting anyone else from getting a chance at competing or improving those experiences.

Furthermore, today’s Statements of Objections are independent of the Commission’s ongoing antitrust investigation in relation to Google’s Android operating system and certain mobile applications. In this regard, in April 2016, the Commission addressed a Statement of Objectionsto Google and Alphabet

“Google has come up with many innovative products that have made a difference to our lives. But that doesn’t give Google the right to deny other companies the chance to compete and innovate,” said Competition Commissioner Margrethe Vestager in a statement. “Today, we have further strengthened our case that Google has unduly favoured its own comparison shopping service in its general search result pages. It means consumers may not see the most relevant results to their search queries. We have also raised concerns that Google has hindered competition by limiting the ability of its competitors to place search adverts on third party websites, which stifles consumer choice and innovation.”

Google now has 8 weeks to respond to the comparison shopping complaint, and 10 for the AdSense for Search. “I will consider their arguments carefully before deciding how to take both cases forward. But if our investigations conclude that Google has broken EU antitrust rules, the Commission has a duty to act to protect European consumers and fair competition on European markets,” Vestager noted.

We’ll have to wait and see how Google suggests to address the problems that Vestager laid out today. Google has had some big wins on this front in the past, although the changing regimes at the EU have meant that a significant earlier determination, which was favorable to Google, have been invalidated.

In the meantime, Google, unsurprisingly, is already objecting to the statements from Vestager and the antitrust commission.

“We believe that our innovations and product improvements have increased choice for European consumers and promote competition,” reads a statement provided to us by Google. “We’ll examine the Commission’s renewed cases and provide a detailed response in the coming weeks.”

Just as predictable is the response from the unequivocally named Fair Search, a lobbying group that includes both smaller and larger rivals to Google (Microsoft is a key member), which has been leading the charge in going after the company and its practices.

“European Competition Commissioner Margrethe Vestager has taken an important step towards prohibiting Google from illegally damaging competition, innovation and consumer choice by issuing two additional Statements of Objections, on search and advertising,” said Thomas Vinje, counsel to FairSearch. “This demonstrates her determination to pursue the matter vigorously and to follow the investigation wherever it leads. Additional Statements of Objections have proved necessary in several other complex, high-profile cases against determined opponents, including both Microsoft and Intel in the early 2000s. These new Statements of Objections also show that the Commission intends to proceed as fairly as possible in these landmark actions. We are confident that the Commission will reach robust decisions condemning and prohibiting Google’s anti-competitive conduct and we urge it to act expeditiously. At stake is fair competition across Europe and beyond, because the on-line market and innovation are global. Google’s actions have hindered the ability to compete for innovators and small- and medium-sized companies in Europe, the United States, and many other regions.”

We are outlining the new charges below, but the long and short of it is that Google currently accounts for around 90 percent of all online search queries across Europe, and the Commission believes that Google uses that position to its advantage in building its online advertising business, which is based around those searches.

The crux is that search services have come to be seen as a utility, while ads have a more explicit business purpose: they are at the very heart of how Google makes money as a company. That they go hand-in-hand for Google is a problem that has yet to be unbundled in a clear enough way for regulators and Google’s competitors to finally walk away satisfied. The antitrust case against Google has been going on for years already in different forms, and now it looks unlikely to end anytime soon (or may end only when Google has finally been supplanted by another dominant player, as happened with Microsoft years ago).

The antitrust commission says that first Statement of Objections that it’s filed today on comparison shopping is an extension of another statement issued in April 2015, and goes back to an investigation that started in 2010. It’s the result of investigations it’s run in the meantime and contains “a broad range of additional evidence and data that reinforces the Commission’s preliminary conclusion that Google has abused its dominant position by systematically favouring its own comparison shopping service in its general search results.” That engine appears when you search for, say, a product and Google provides a list of places where you can buy said product, just above of sponsored ad links to the product, and then finally web links to information about that product: 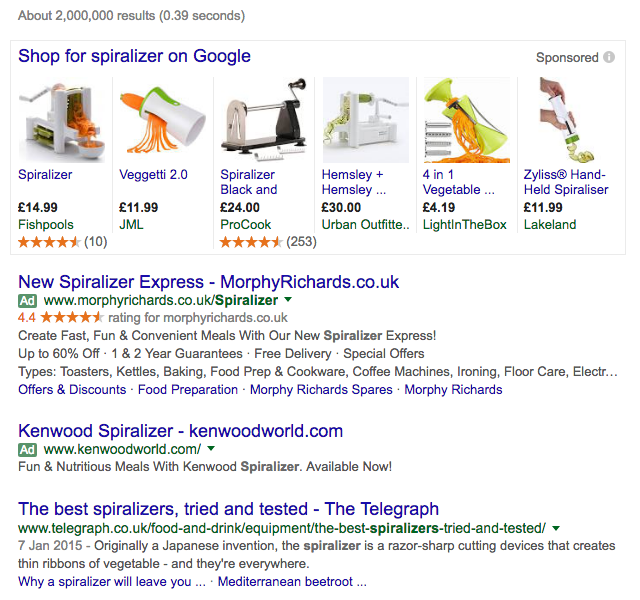 “he impact of a website’s prominence of display in Google’s search results on its traffic, and the evolution of traffic to Google’s comparison shopping service compared to its competitors. The Commission is concerned that users do not necessarily see the most relevant results in response to queries – this is to the detriment of consumers, and stifles innovation,” the commission notes.

Google’s argument has been that its real competition in this area have been large marketplaces like Amazon and eBay. However, the commission isn’t buying that. “Comparison shopping services and merchant platforms belong to separate markets,” it said. “Even if merchant platforms are included in the market affected by Google’s practices, comparison shopping services are a significant part of that market and Google’s conduct has weakened or even marginalised competition from its closest rivals.” (EC’s own bolding)

The other major area under the spotlight today has to do with AdSense, and specifically AdSense for Search.

The commission takes no prisoners on this one, either. “The Commission’s preliminary view set out in today’s Statement of Objections is that these practices have enabled Google to protect its dominant position in online search advertising,” it noted. “It has prevented existing and potential competitors, including other search providers and online advertising platforms, from entering and growing in this commercially important area.”

While AdSense is the name for Google’s entire ad business on third-party sites, this complaint involves when AdSense ads appear on these sites as a result of a search made on those sites, commonly used by online retailers, telcos and media sites. As the commission describes it: “The websites offer a search box that allows users to search for information. Whenever a user enters a search query, in addition to the search results, also search ads are displayed. If the user clicks on the search ad, both Google and the third party receive a commission.”

Just as Google is king in online search, it’s also king in this area, which is known as search advertising intermediation, holding a market share of around 80% in the last decade. On top of this, it seems that the revenues Google makes from these services involve “a limited number of large third parties, so-called ‘Direct Partners’,” and this is where the commission believes Google has breached antitrust regulations because of three reasons:

Google requires third parties to take a minimum number of search ads from Google, with premium placement for them.

And finally, Google demands that these sites seek approval from Google before they make any changes that might involve competing ads.

“The Commission takes the preliminary view that the practices, which have been in place for ten years, hinder competition on this commercially important market. The Statement of Objections takes issue with the exclusivity practice as from 2006. This was gradually replaced from 2009 in most contracts by the requirement of premium placement/minimum ads and the right for Google to authorise competing ads. The Commission is concerned that the practices have artificially reduced choice and stifled innovation in the market throughout the period. They have artificially reduced the opportunities for Google’s competitors on this commercially important market, and therefore the ability of third party websites to invest in providing consumers with choice and innovative services.”

Apparently, Google is already starting to take some steps to right all of the above, changing the conditions on its AdSense deals with Direct Partners to free up some of the above restrictions.